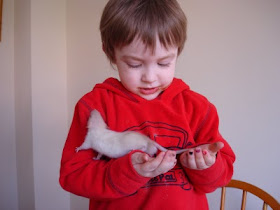 Okay, the one without the chocolate all over their face is Ratty. He, Ratty, is 20 weeks old and weighs 360g. He is slim, active, well muscled (for a rat) and, of course, eats a very high fat diet. In fact he eats exactly the same food as we do with extra fried belly pork and cheese to snack on between meals of scrambled egg yolks (in butter), Bolognaise sauce, chilli mix or beef stew, should he ever get hungry between those main meals. My wife gave him a grape once. I removed it from his cage when it went mouldy.

I don't think he has metabolic syndrome. He eats an ad lib diet which provides about 70% of his calories from fat.

Now, I was looking through Axen and Axen's 2010 paper on managing metabolic syndrome in rats. First you have to make them obese. Hmmmm, now how might you do that? Ah ha! A high fat diet. In fact just 60% of calories will do the trick. Wow. Lets look at Table 1, column 2, HF diet used to induce obesity in rats. There it is: 60% fat, 25% protein and a mystery 15% carbohydrate. 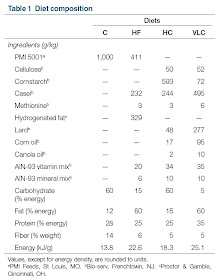 Plus this line in the methods:

OK, are you thinking the carbohydrate was sucrose? Me too. Wrong! But the fat was supplied by Proctor and Gamble.

If you work through the paper to find out how this obesogenic diet was developed you get to ref 9, which is Axen and Axen again, this time in 2006. Once again, Table 1 for diet composition: 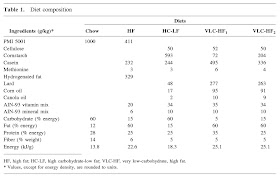 This tells us nothing more about the obesity diet (it's not really what the paper is about) but the fat was supplied by Proctor and Gamble. The paper does have another reference about the obesogenic diet, number 13 this time, which leads us to a gem from another Axen paper, just Kathleen and friends this time:

This is the sort of paper I love. Here is the abstract from 2003.

I think I have to put it here in full as it is really too important to summarise. They have a diet which develops metabolic syndrome in rats which CANNOT be prevented by restricting calories to normal body weight. Has any one heard of the "slim but metabolically obese" concept? The skinny type 2 diabetic? Kathleen Axen knows EXACTLY how to produce a skinny type 2 diabetic rat! And this is the paper. And here is the abstract:

"High fat, low carbohydrate diets are popularly advocated for weight loss and improvement in metabolic Syndrome X, a constellation of risk factors for type 2 diabetes mellitus and cardiovascular disease. The effects of an energy-restricted (to prevent weight gain in excess of normal growth) high fat (60% of energy), low carbohydrate (15%) diet were assessed in both lean rats and in rats previously rendered obese through ad libitum consumption of the same high fat diet. In obese rats, restriction of intake failed to improve impaired glucose tolerance, hyperinsulinemia, and hypertriglyceridemia, although it lowered visceral fat mass, liver lipid content and in vitro insulin hypersecretion compared with rats continuing to consume the high fat diet ad libitum. In lean rats, restricted intake of the high fat diet impaired glucose tolerance and increased visceral fat mass and liver lipid content. These findings support the conclusion that, in the absence of weight loss, a high fat, low carbohydrate diet not only may be ineffective in decreasing risk factors for cardiovascular disease and type 2 diabetes but may promote the development of disease in previously lower risk, nonobese individuals."

I think that that's pretty conclusive. A diet of 60% fat makes a rat glucose intolerant even if you starve it (and rats in the starved group will be HUNGRY, unlike Ratty) to a normal bodyweight. And no sucrose in sight. High fat and restricted carbohydrate diets might PROMOTE type two diabetes in rats (and people?) and give them heart attacks (do rats have heart attacks?) even if they were slim to begin with and stay slim on the diet. That's me and Ratty all right.

Ratty and I are doomed to diabetes it appears.

BTW, did I mention that Proctor and Gamble provided the fat?

Which fat? Well, here's the section which never made it in to the abstract:

"with 17% of total fat as trans fatty acids"


That's a very special fat. Magic fat. Unless I am very much mistaken Proctor and Gamble make commercial bootpolish marketed as fit for human consumption. I think it's called Crisco. They have been poisoning America with it for decades.

DO NOT, UNDER ANY CIRCUMSTANCES, BASE YOUR DIET ON 60% OF CALORIES FROM FAT WHICH INCLUDES 17% TRANS FATTY ACIDS.

People will think that eating fat makes you fat......

It certainly will if Proctor and Gamble supplied it.

OK, the 2006 and 2010 studies need looking at next in some detail. They are really quite funny in combination. Also, to give K Axen her due she does discuss trans fat toxicity extensively in the discussion of the paper. But not the abstract. There it's "fat" all the way. A pinguid diet (for Gary; ok do I win at Scrabble now?).

Actually, re reading the last sentence of the abstract: This is a very unpleasant piece of writing. Would people go as far as the full text to read what the paper is actually about?
Peter at Saturday, August 21, 2010