It only needs a brief glance through the literature to realise that uric acid is a prime mover in metabolic syndrome and might reasonably compete with cholesterol as the premier mammalian-synthesised molecule of self destruction.

Until of course you come across interesting papers like this one which suggests that uric acid is a signal of tissue injury, a mobiliser of repair systems and, in particular, a recruiter of endothelial progenitor cells.

In modern terms, stepping on a land-mine will produce a surge of uric acid to blunt the effects of the renal ischaemia which will occur as you bleed out through the remains of where your foot used to be. In evolutionary terms you can see how surviving acute trauma might be beneficial and it looks like uric acid is seriously useful in this context. Stepping on a land mine every day fairly rapidly becomes problematic in terms of all cause mortality and even uric acid is unlikely to maintain its efficacy with prolonged usage. Chronic drug induced hyper uricaemia appears to be a Bad Thing in that it blunts the benefits of acute elevations. If you don't live in a heavily land-mined country you are (a) lucky and (b) more likely to be injured by a bottle of cola or a bowl of apples. Or maybe oranges, stawberries, kiwis etc. Whether it is simply the fructose in the cola or some other plant nasty in the fruit in addition to fructose isn't particularly clear. But your body produces a spike of uric acid in response. It's been injured.

It is perfectly possible to consume cola or fruit on a chronic basis without the immediately obvious effects of repeatedly treading on a land mine.

This leads me to whether there are direct benefits from minor damage of eating fruit via hormesis or whether it is just all bad. I suspect it depends on the dose and the chronicity. When you look at WHEL and PPT there may well be some sort of accommodation which leaves total mortality unchanged by eight years of eating extra fruit and veg. There seems to be little doubt that an acute rise in uric acid is beneficial and chronically elevated uric acid may be less so. This flies in the face of Kwasniewski's opinions about uric acid, the more the better. But he is talking about elevated uric acid in a LC high saturated fat situation, not after eating a bowl of apples a day for a few years.... Of course he never cites references but I'm keeping an eye out!

Ascorbate is interesting as it is a rather ubiquitous antioxidant and does appear to be used by humans for assorted essential functions, all be it in very small amounts, despite the fact we cannot synthesise it. Most mammals tightly regulate their ascorbate production to their needs as they can produce it on demand. Not so humans. We don't produce it and our intake is completely random, varying from 10mg per day or less on an all meat diet to a few 1000mgs if you fall face down in a clump of cranberries and keep eating all day.

The chances of you meeting the cranberries every day for six weeks are slim, so if you want to study the effect of relatively high doses of ascorbate on free radical mediated processes in humans you have to use supplements. Eating 1000mg represents an awful lot of berries but is a common supplement dose.

This group in Spain actually pre empted the group in Germany in demonstrating the adverse effects of ascorbate supplementation on the effects of exercise.

If you dose with 1000mg ascorbate daily you will scavenge the free radicals and blunt the increase in both muscle mass and mitochondrial number which should have been generated by those free radicals. You might expect this and it's worth noting that the effect appears to clearly detectable but far from complete.

I have worked on the assumption that taking antioxidants should down regulate your own endogenous antioxidant production. The Spanish group used rats for this part of their research and did indeed find that gene expression for synthesis of both superoxide dismutase and glutathione peroxidase are markedly down regulated. A zero increase with ascorbate supplemented exercise compared to a 3.5 fold increase after three weeks of unsupplemented exercise. 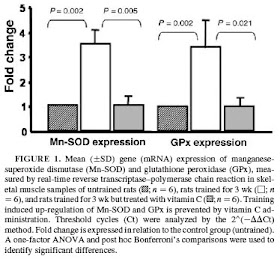 Think of the implications. You exercise, exercise generates free radicals, free radicals build muscle and upregulate production of antioxidant enzymes. So exercise is, fundamentally, antioxidant (while ever it is kept within the limits which can be accommodated by synthesis of SOD and GPx). Obviously ultra-marathon runners must be willing to injure themselves for their sport.

Mega dosing with ascorbate markedly blunts the induction of the intrinsic antioxidant system of mammals, even of a rat which naturally produces ascorbate.

What about resveratrol? Feed it to a mouse in quantities equivalent to between 150 and 1,500 bottles of wine a day and you get some improvement in inflammatory markers. Do you simultaneously down regulate SOD and GPx synthesis? Now there is a question!

That will be a cracking study. The answer will be yes if resveratrol really scavenges significant numbers free radicals. Our own endogenous antioxidant systems are fine tuned to our needs. What does a blanket treatment with a highly potent antioxidant do to our ability to respond to the daily alterations in free radicals? Free radicals carry information. How do we replace the information lost if they are stuck to a resveratrol molecule?

Luckily our bodies try hard not to absorb the stuff and normally metabolise it to sulphated or glucuronated forms within minutes. It's unlikely that we ever have much free resveratrol (or dark chocolate favanoids either, phew) in our bloodstream until human ingenuity invented the resveratrol chewing gum.

BTW The Wiki article on resveratrol appears to be very contentious. Wiki becomes a battleground once you get on to sticky subjects like cholesterol and, apparently, resveratrol. I've kept the text for when it gets edited to "Resveratrol explains the French paradox and will make us live for ever"
Peter at Friday, August 06, 2010