TLDR: The function of insulin is the inhibition of lipolysis. In the brain. In the periphery.

If you want to think about the central effects of insulin you could do a great deal worse than working through this paper:

It is jammed full of exquisite quotes:

"To reduce the likelihood of pharmacological effects of the insulin doses administered, we choose a dose of insulin that is more than 15,000–fold lower than those commonly used for ICV [intra cerebro ventricular] insulin infusions (Air et al., 2002; Brief and Davis, 1984; Rahmouni et al., 2004)"

"Both ICV and MBH insulin administration markedly suppressed the rate of appearance (Ra) of glycerol under basal and clamped conditions indicating that brain insulin, and more specifically MBH insulin signaling, suppresses lipolysis (Figs. 1B and C)"


Here it is in pictures.

What does a CNS infusion of insulin do to lipolysis, at what are purported to be physiological dose rates? Obviously, it does exactly what peripheral insulin does, but using minuscule amounts; it suppresses lipolysis: 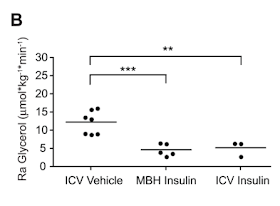 Of course, you have to ask how physiological is this "physiological" infusion rate? Insulin in the brain is thought to be derived from insulin secreted by the pancreas, so we are at liberty to ask what level of plasma insulin would produce a comparable level of suppression of lipolysis. The answer is an hyperinsulinaemic clamp of 3mU/kg/min, as in the above quote. That will be a clamp of somewhere around 70microU/ml clinically (3.5ng/ml in the paper), the sort of level of systemic insulin a healthy human might produce following a meal of real food, it's the column on the right of the graph: 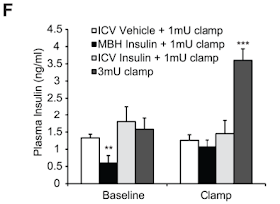 Obviously the fall in lipolysis results in depressed FFA levels during the central insulin infusion, as you might expect: 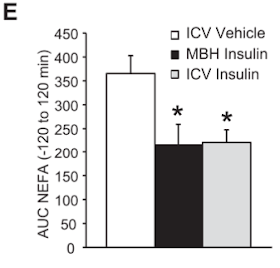 The researchers didn't check the fall in FFAs from the peripheral 3mU/ml/kg clamp but I would expect it to be comparable to the central infusion level fall, glycerol appearance was equally suppressed by the central and peripheral administrations.

So one question (among many) is: Does this fall in plasma FFA levels result in hunger?

Oddly enough there are relatively few studies where humans have had experimental cannulae inserted in to either their cerebral ventricles or directly in to their ventomedial hypothalamus for insulin infusion. Ok, there are none.

But there are plenty of studies where humans have had systemic hyperinsulinaemic euglycaemic clamps performed. What is rare is to ask what the effect of such a clamp might be on hunger. Which brings us to another gem of a paper, this one from Woo. And it's good.