Completely at random Tucker emailed me this paper using the classical model of Bl/6 mice fed an unspecified 60% fat diet to become obese. He thought I might find it interesting from the Protons perspective. He is correct.

and there is another group working with the same drug here

Mitochondrial uncoupler BAM15 reverses diet-induced obesity and insulin resistance in mice
BAM15 has the potential to be a blockbuster so I think we should be very, very cautious in how we view these reports of marvellous efficacy. They're probably correct, but caution.
The papers above fit nicely in to the venerable work I've recently been reading relating to DNP, which I'll come back to in a post or two.
Today I just wanted to point out a glaring problem within the BAM15 papers for anyone viewing the work from the Protons perspective.
BAM15 reverses the insulin resistance of diet induced mouse obesity models. As in the last ref:
"Collectively, these data demonstrate that pharmacologic mitochondrial uncoupling with BAM15 has powerful anti-obesity and insulin sensitizing effects without compromising lean mass or affecting food intake." My italics.
I maintain that insulin sensitising makes you fat and that uncoupling should make you thin by suppressing insulin signalling, assisted by a "calories out" component of heat generation.
Let's look at the explanation of how we square this circle.
We need Figure 1 plus the methods section. An oral gavage of BAM15 at 10mg/kg achieves a therapeutic concentration and shows an elimination half life of around 1.7 hours in mice.


Plasma concentration appears to be sub-therapeutic by four hours max, probably drops too low by two hours. The rest of Figure 1 shows us that BAM15 is essentially liver specific. To demonstrate that the uncoupling is liver specific you have to give that higher dose of BAM15 (50mg/kg) and measure tissue specific oxygen consumption at peak effect,  ie one hour post gavage. 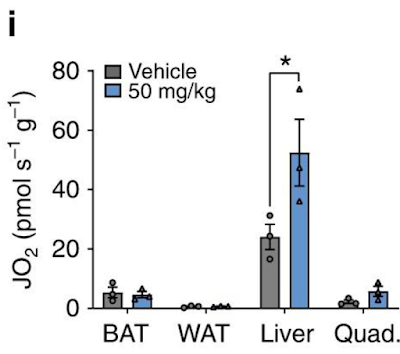 We can also see that by four hours after a therapeutic gavage that liver concentration is also sub therapeutic following a 50mg/kg oral dose: 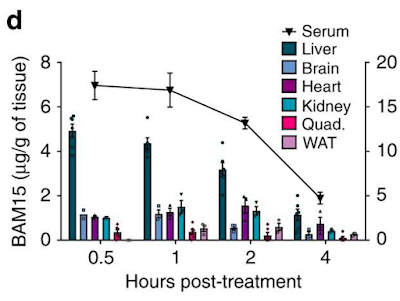 Then we have the methods section where we can find that the euglycaemic hyperinsulinaemic clamp was performed, as you might expect, after a fast of five hours. The drug is in the food.
By five hours of drug withdrawal the clamp is actually looking at the behaviour of the phenotype induced by the drug, not at the mechanism of action of the drug itself which was used to achieved that phenotype.
If we consider NAFLD as the pathological storage of lipid in the liver secondary to "mopping up" of FFAs released from overly distended adipocytes (with overactive basal lipolysis) then we are in a position to see why suppressing insulin signalling in hepatocytes releases fatty acids from hepatic triglycerides (aka fatty liver). There is no need for export of those released fatty acids in the form of VLDLs because each uncoupled hepatocyte is already in caloric deficit secondary to that uncoupling, which is what is suppressing insulin signalling while simultaneously providing a "calories out" route as heat.
Resisting insulin -> diminishing fat storage.
Continuous disposal of FFAs being stored in the liver from over distended adipocytes, without recycling those FFAs back to adipocytes as VLDLs (aka high fasting triglycerides) produces a slim, insulin sensitive phenotype. Because adipocytes become small, with associated low basal lipolysis.
Just one feature of BAM15, uncoupling, produces both specific hepatic insulin resistance (reducing hepatic triglyceride storage) combined with unstoppable drug-induced hepatic lipid oxidation as a "calories out" route.
Both from that single action of uncoupling. Neither effect is present once the drug wears off.
Insulin sensitivity/resistance being "good" or "bad" is absolutely context specific.
There is no glimmer that any of the above cited papers have an insight as to this being the mechanism of action of BAM15.
But that's how it works.
Support comes from the DNP papers.
Peter
Peter at Saturday, May 07, 2022