FFA vs 4-HNE for activating uncoupling

Another basic mitochondrial concept. This is Brand again. The paper features mitochondria extracted from yeast cells which have been transfected with a plasmid for the mammalian UCP-1 gene.

Synergy of fatty acid and reactive alkenal activation of proton conductance through uncoupling protein 1 in mitochondria
UCP-1 is the odd man out of UCPs, its primary function is thermogenesis in adipose tissue but it seems that the control systems are similar across the whole family of proteins. UCP-1 is useful because the degree of proton leak is huge compared to other UCPs, which makes measurements using isolated mitochondrial preparations easier.
It turns out that, in addition to palmitate (and other fatty acids) many lipid derivatives also activate uncoupling, 4-HNE being one of the best studied.
They isolated mitochondria from their yeasts and fed them with either 4-HNE, palmitate or a combination of the two and looked at the degree of uncoupling (using O2 consumption under oligomycin as the surrogate, as you do). 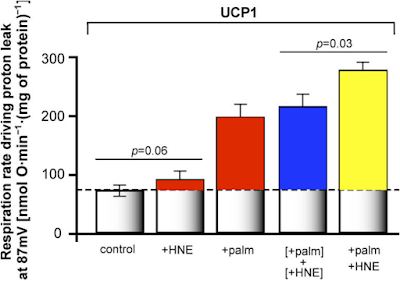 The two red rectangles are the degree of uncoupling induced by either 4-HNE alone or palmitate alone. Both do something. If you simply add the two red rectangles together you get the blue one, which is what you would expect if the two agents were additive. The yellow rectangle is what you actually do get, ie significantly more uncoupling because the combination is synergistic. There are papers which suggest the 4-HNE is essential for palmitate to uncouple but that might be model dependent. The above experiments are using a membrane potential of 87mV, ie quite low. A high membrane potential might have generated enough 4-HNE in situ to mask the effect of exogenous 4-HNE. Or done other things, next post.
Philosophically I view the 4-HNE in this role as a signal that some degree of ROS related "damage" has occurred to the PUFA components of the mitochondrial membrane. A little too much in the way of ROS produces a degree of lipid damage which facilitates uncoupling, which drops mitochondrial membrane potential and lowers ROS generation and subsequent damage. I have the quotation marks around "damage" because the degree of damage is that at which evolution has decided is acceptable before stepping in with an effective intervention, ie the damage is permissible and non injurious to the cell.
Bottom line: Fatty acids and lipid oxidative derivatives of PUFA both support uncoupling. Their mechanisms appear to be different and to be synergistic. We can go on to look at some aspects of their regulation in the next post.
Peter
Peter at Thursday, June 23, 2022