Back in the 1990s Veech's lab noted that supra maximal insulin, combined with glucose at 11mmol/l, markedly improved the ability of an isolated rat heart to pump oxygenated perfusion fluid compared with glucose alone. The mechanism of the effect was not explicable from their model but was very clear cut and the time scale of onset suggested a covalent bonding process.

Substrate signaling by insulin: a ketone bodies ratio mimics insulin action in heart
Macroscopically, the amount of work done per mole of oxygen consumed increased. As this was without an increase in glycolysis the implication is that insulin increases the coupling of mitochondria.

I was left with the idea at the time, reinforced occasionally by other finds, that insulin was has a major effect of increasing coupling within mitochondria.
Insulin clearly has many, many effects within a cell. It's not possible to examine any of these using isolated mitochondrial preparations because they have no cytoplasm to respond to insulin. You need intact cells.
I recently came across this rather nice paper:
Insulin acutely improves mitochondrial function of rat and human skeletal muscle by increasing coupling efficiency of oxidative phosphorylation
It looks at an assortment of muscle derived cells in much the same way as mitochondrial preparations examine mitochondrial performance, but here whole cells used, a small step closer to reality than isolated mitochondria. They have intact cytoplasm so can function on "normal" substrates such as glucose or palmitic acid. The cells are not even "permeabilised".
They used standard mitochondrial techniques such as full uncoupling with FCCP to assess the maximum possible oxygen consumption and oligomycin to assess peak oxygen consumption from proton leak in the absence of a functional ATP synthase. So they can provide standard mitochondrial study parameters like respiratory control ratio and make estimates of the degree of (un)coupling of respiration and of the efficiency of ATP generation.
All good but even better they then went on to look at the effect of fairly physiological concentrations of insulin on these parameters. And to look at the effect of palmitate alone and palmitate in combination with insulin.
They are looking at mitochondrial function within intact cells, with functional cell surface receptors and cytoplasmic signalling cascades. Insulin was used at 10nmol/l (10,000pmol/l) which is only just above peak post prandial levels and even their 100nmol/l dose is still way below the millimolar concentrations commonly used to assess the effects of supra maximal insulin stimulation on cell preparations.
Their palmitate dose rate is hard to assess as they presented it bound to albumin with an estimated free palmitate of 20nmol/l, ie 0.02micromol/l. Almost every other study simply measures/specifies total palmitate in solution so making comparisons is hard. Obviously the 400-2000micromol/l of FFAs which are normal in fasted human plasma are almost completely albumin bound, so it's hard to tell if the estimated 20nmol/l of free palmitate used in the study is high or low. It certainly has an effect.
These are the graphs of oxygen consumption from the human derived muscle cells/myotubes: 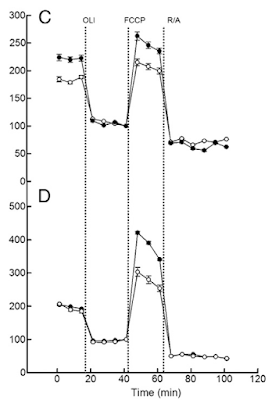 The graphs are not intuitive. First, everything is normalised to the rate of oxygen consumption under the influence of oligomycin (between times 20 and 40 minutes) ie state 4oligomycin, and are expressed as a percentage of this. So the sections of the graph in the "dip" after the line labelled "OLI" are baseline and labelled 100, ie 100%.
Under oligomycin there is a complete blockade of ATP synthase so any oxygen consumption has to be facilitated by uncoupling. The absolute values will not be identical with vs without insulin, they are just deliberately aligned at 100. The absolute values will differ based on the activity of uncoupling proteins.
Once FCCP is added there is complete uncoupling of all respiration (while ATP synthase still remains blocked with oligomycin) and so this represents the maximum possible flow of electrons down the ETC to complex IV, with no buildup of proton gradient to inhibit this. These peak values are probably identical whether insulin has or hadn't been applied because FCCP is supra maximal in its uncoupling so subtleties of UCPs become irrelevant. No one has added palmitoylcarnitine either.
This shows as a greater percentage *increase* when insulin has been applied earlier, ie the oligomycin phase had different absolute oxygen consumptions with or without insulin. I think it's just convention to set up the graphs as they are.
So glucose + insulin couples respiration compared to glucose without insulin.
Which reiterates Veech's findings.
Okay. So we can calculate the coupling efficiency of mitochondria respiring on glucose with or w/o insulin and express it as a fraction of unity. Insulin always increases the coupling of respiration when oxidising glucose. Black bars with insulin: 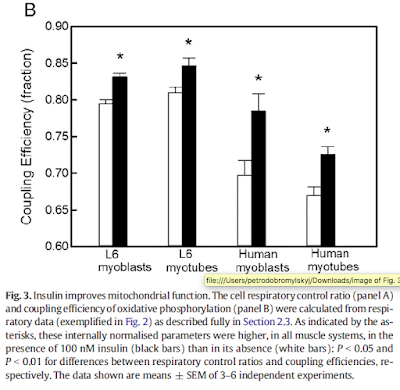 The study didn't look at delta psi or ROS generation so we have no way of knowing exactly what happens to these parameters.
Adding palmitate completely blocks (and probably (ns) decreases) the increase in respiratory coupling seen when insulin is added to glucose. Right hand columns labelled as added PA: 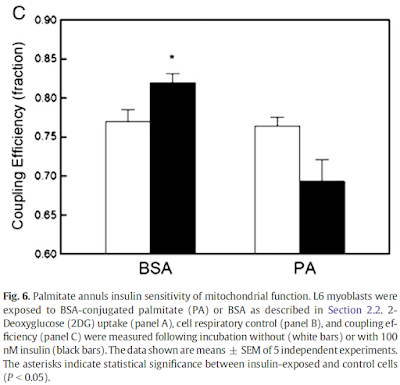 The change downward looks to have come very close to statistical significance. This suggest that small (possibly) doses of palmitate negate insulin's coupling effect and trend towards actively reversing it.
What is also interesting is the left hand pair of bars. The white bar is insulin + glucose and the black bar is insulin, glucose and "empty" bovine serum albumin (BSA). The BSA produces a statistically significant increase in coupling of respiration. This is in a cell prep which has not been treated with exogenous fatty acids. There are enough fatty acids "floating around" to interfere with insulin's coupling action on mitochondria.
My assumption is that the empty BSA scavenges free fatty acids by supplying a sequestration site for any FFAs in the culture. Reminiscent of the effect of carnitine in a previous post.
Let's make this completely clear: Mitochondria in cells exposed to insulin are more coupled compared to those without insulin. Adding extra palmitic acid reduces this extra coupling. Removing background levels of free fatty acids enhances insulin's coupling effect.
Insulin is an enhancer of coupling in the mitochondria of intact cells. It's effect appears to be mediated through changes in free fatty acid availability which are known mediators of activation of uncoupling proteins.
TLDR: All isolated mitochondrial preparations are devoid of insulin signalling so will automatically be uncoupled to some degree, which goes some way to explaining continued oxygen consumption under oligomycin. Especially using supra maximal NADH generating substrates. But it doesn't help explain the regulation of membrane potential to around 180mV under high substrate supply.
Other things might.
Peter
Peter at Saturday, June 18, 2022