Presentation-on-video is one of the least accessible sources of information for me. For a stack of practical reasons I don't get a lot of listening time. I made the effort the other day and got depressed. Why?

We all know hereditary fructose intolerance tends to produce death when some joker sets up an intravenous fructose infusion in the intensive therapy setting.

But why should anyone want to use IV fructose in the ITU setting? Calories. Critically ill people need calories. Lots of them. Meeting this need has been managed in many different ways over the years. Nowadays we do it through an enteral feeding tube or, if you can't get anything in through the gut, using intravenous emulsified soyabean oil (pardon the aside vomit) or emulsified MCTs (ah, that's better, let's have a few ketones in the ITU). You can't use glucose. Unless you add exogenous insulin to a glucose infusion (plus some potassium please) it just makes you hyperglycaemic and you then pee glucose out through your kidneys, especially if you are already as insulin resistant as a lot of critically ill patients are.

Not so with fructose. Infuse fructose in to a peripheral vein and it immediately disappears in to liver tissue to replenish glycogen stores before any excess becomes intra hepatic fat. But it also disappears in to muscle cells, big time. And adipocytes too. In fact, in to any cell expressing the GLUT5 transporter* on its surface. Even bits of the brain do this. No insulin required. Fructose gets calories in to tissues without wasting too much through exceeding its renal excretion threshold. That's why it got chosen for ITU work back in the 1970s. It works. A pity it kills people with hereditary fructose intolerance.

* Did you note "testis" in there? Human sperm appear to run on fructose. There is a post on sperm, fructose and nitrous oxide injected Morris Minors brewing for some day.

I've been particularly interested in whether oral fructose might cause whole body insulin resistance directly, especially adipocyte insulin resistance, rather than just being limited to hepatic de novo lipogenesis and the systemic sequelae associated hepatic insulin resistance. You have to ask whether fructose really stops at the liver, especially in human beings. After all, those GLUT5 transporters are not sitting there on myocytes and adipocytes awaiting an intravenous fructose infusion... So what is the plasma fructose concentration after something a bit like a large McDonald's Coca-Cola Classic®, the 32oz serving? With or without breakfast, and compared to assorted ratios of glucose and fructose? Here are the (very old) data:

Fructose penetrates well past the liver in humans after a 32oz cola. There are GLUT5 receptors on multiple non hepatic cell types. Fructose effects do not appear to be limited to the liver. I was really interested in this some time ago but never got to post about it. It's quite speculative.

The question is: Why are some of the nurses I work with skinny despite subsisting on sucrose in various guises?

Apart from the possibility that skinny folks who eat a sucrose based diet are chronically hungry (some certainly are), why else might they not be fat?

Perhaps: If you can dump a decent dose of fructose on to adipocytes you might well limit their response to insulin. These folks would still get the classic fatty liver and hyperinsulinaemia but fail to store large amounts of fat in adipocytes because fructose exposed adipocytes would become insulin resistant and so release inappropriately large amounts of FFAs for a given level of insulin. They are, after all, resistant to insulin's fat storage effect. No one would suggest that this is a healthy situation and terms such as "skinny-fat", "metabolically obese but slim" and "slim type 2" all come to mind. Weight per se is unimportant, chronic hyperinsulinaemia comes with its own costs.

Where did all of this come from? Tom Naughton and Makro both provided the link to this video.

I agree with a great deal of what Lustig has to say. But I find it hard to swallow an argument when certain easily disprovable biochemical statements are made. Saying that fructose uptake and its transporter are limited to the liver is disappointing. We have enough problems with misinformation on carbohydrate restriction from folks with carbophilia. It's depressing when we simplify our message to the point where even a politician can understand it, ie to the point where it is no longer true.

Here's a typical paper, there are probably loads more out there.

Despite the lack of gross obesity, the epididymal fat pads are bigger, the actual adipocytes in these pads are bigger than those from controls and the adipocytes are, of course, insulin resistant. Just look at the FFA levels in the table. 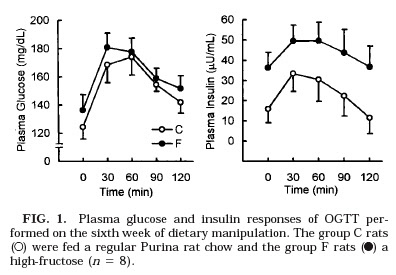 The fructose fed rats clearly produce a ton of insulin in response to an oral glucose load, far more than the CIAB fed controls. If they can produce this much insulin, surely they must be able to overcome adipocyte insulin resistance and make themselves FAT? You can certainly store a whole load of extra fat in the adipocytes of an insulin resistant human by adding exogenous insulin in to their diabetes meds...

The group doesn't specify the diet exactly (they must be in obesity research) but it's made by Teklad Laboratories and is probably TD.89247. About 67% of calories from fructose, no other source of carbohydrate.

Which these rats live on.

Now what happens if you add fructose AND glucose to a rat's lard/casein diet? It's called sucrose. It is, err, obesogenic. Especially in the presence of easily storable fat.

Because here you spike insulin while simultaneously causing insulin resistance, which will cause a MUCH bigger insulin spike than even the rats on CIAB produce after each meal. Adipocytes can be forced to enlarge under these circumstances. It's called obesity.

Of course it might just be that sucrose is more rewarding than that significantly sweeter molecule, fructose. Perhaps fructose is sooooooo sweet it becomes unrewarding? Or boring. Or perhaps the idea of reward from sweetness is complete bollocks and we are dealing with a simple biochemistry process. I rather like biochemistry.


If we go back to my skinny workmates you can now start to ask questions about a person's ability to absorb fructose from the gut, the ability of their liver to mimimise passage of fructose to the systemic circulation and the level of expression of GLUT5 on adipocytes etc. You can even think about whether these people may, by going to Weight Watchers, limit their intake of starch which is a significant drive to insulin production when added on top of the insulin resistance from their sucrose fix.

But ultimately we're still thinking about biochemistry.
Posted by Peter at Wednesday, May 09, 2012 44 comments: