This is a lovely paper from back in 1990. The researchers are looking at membrane function rather than mitochondrial function but this doesn't stop you viewing their results from a Protons perspective. They fed rats on one of two diets, 40% of calories from fat in both. Here is the compositions of the fats used: 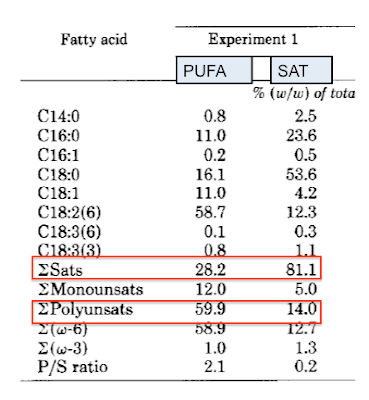 Obviously one is very high in polyunsaturates, the other in saturated fat. I've re-labeled the results from each diet with PUFA or SAT from here forwards because the P:S ratio labels they used aren't particularly clear and I've also crudely edited out most of the results for the streptozotocin (drug induced type 1) diabetic groups from tables and graphs because they're not related to what I want to say.

So if you compare feeding a PUFA diet vs a SAT diet, what happens to body weight after six weeks? 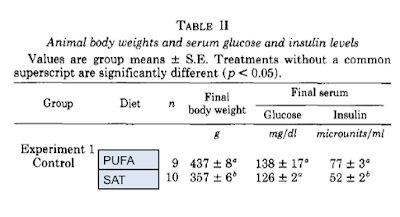 I think that an excess weight gain of 80g for a 360g rat in six weeks is pretty impressive, all of this excess weight is likely to have been adipose tissue. Neither diet contained any sucrose (cornstarch was the sole carbohydrate source) and nothing was changed other than the level of saturation of fatty acids. You could, if you were stupid, simply say that corn oil is more Rewarding than beef dripping. If you were less of an idiot you could talk about omega 6 derived endocannabinoids driving hunger and so weight gain, with insulin resistance developing as a result of over eating...

Or you could, if you follow the Protons ideas, extract some adipocytes and look at their insulin sensitivity.

Bear in mind that the obese, PUFA fed rats are both hyperinsulinaemic and hyperglycaemic compared to the SAT fed rats, ie on a blood sample or whole body basis they are insulin resistant. Protons suggests that their adipocytes should be insulin sensitive. A paradox perhaps...

Here is an insulin binding assay for adipocytes isolated from PUFA vs SAT fed rats: 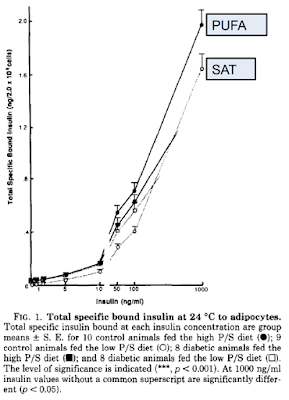 Adipocytes from PUFA fed rats bind more insulin at a given level of insulin exposure than do adipocytes from SAT fed rats. Insulin has to bind to its receptor to work...

Here is the glucose uptake at rising levels of insulin exposure: 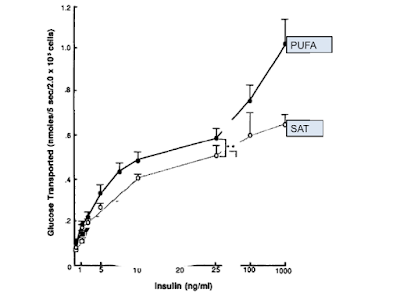 The PUFA adipocytes take up more glucose than SAT adipocytes and this effect become progressively more obvious at very high levels of insulin. You can rearrange the data to give this graph, glucose transported per unit insulin bound: 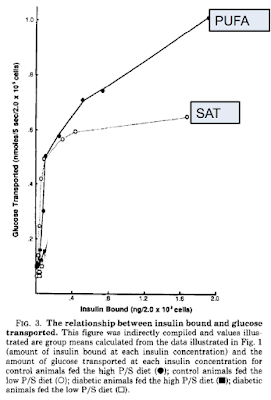 Which is rather nice, if (as I do) you expect PUFA to allow too much glucose in to cells when insulin resistance is needed.

And here is the incorporation of glucose in to lipid: 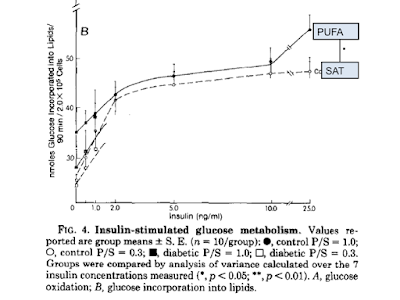 At the highest levels of insulin exposure more glucose is incorporated in to lipid under PUFA than under SAT and the trend is there at all levels.

To me all of this suggests that adipocytes from PUFA fed rats are more sensitive to insulin than those from saturated fat fed rats.

From the Protons point of view adipocytes (and all other cells) metabolising PUFA are unable to generate the superoxide needed to cease insulin signalling (too little FADH2 being delivered to ETFdh) when  the caloric input to the cell is so high that glucose ingress should be limited. If this does not happen there are two consequences.

One is that adipocytes distend with fat.

Second is that, given enough distention, these adipocytes cannot hang on to their lipid as well as they should do. Basal lipolysis rises, probably via Adipose Triglyceride Lipase (ATGL). Free fatty acids are then released even in the presence of insulin, ie when the suppression of release caused by increased insulin sensitivity is overcome by the facilitation of release due to distension, you have a mess. The adipocytes are still insulin sensitive. Rising systemic free fatty acids eventually negate any insulin sensitising effects of PUFA oxidation and systemic insulin resistance ensues...

This is metabolic syndrome.

Your cardiologist gave it to you.

My continued following of your blog
has been Rewarded. HA HA HA. That's
funny!

What an absolute pleasure to read each article in detail with so much attention-grabbing commentary from you. I love to keep learning about lipids with you.
Thank you.

Tushar, I think this particular paper is one of the most explanatory papers I've come across in a long time. I think it's important and way ahead of the current plethora of papers demonstrating linoleic acid is obesogenic (or not, chose your paper!). But who in academia reads stuff from the 1990s?

and bill, I don't read stuff about Reward but if the definition is circular then undoubtedly corn oil is more rewarding than beef dripping because you eat more of it. Hence it must be Rewarding, otherwise why else would you eat it........?

And what would young, healthy humans look like if you fed them a KD of PUFA vs SAT for 5 days and measured their insulin sensitivity, ketone levels and "cholesterol" ? Something like this: https://academic.oup.com/jcem/article/89/4/1641/2844241 And if you don't understand fuel partitioning, fat flux, and physiological insulin resistance (and run the study) you would tell the world to eat PUFA.

The more interesting thing to ponder is why has this 2004 medical student study surfaced now?

Thanks mommymd, that's a great study. Yes, going to a ketogenic diet clearly stops the weight gain and all we see is the insulin sensitising effect of the PUFA, which is spectacular in the varnish group. It's an interesting question whether this is good or bad! We know from rats (or mice??? Can't recall off hand) fed F3666, high in linoleic acid, stay slim, live as long as mice fed CIAB but develop inflammatory hepatic lesions. What would flax oil do long term? And who wants to maintain insulin signalling when they should be aiming for physiological insulin resistance? Clearly there is a market for flax oil!

Again,thanks for the link

I‘m new to your blog and slowly working through it with much left to read so please forgive me if this question is answered somewhere else:
If adipocytes take up too much PUFAs and eventually start leaking FFAs then why are the leaked FFAs resistance-inducing (sat) and not sensitizing when PUFAs leak back into circulation? Or if so, why are they all oxidised? And where come the saturated fats from? Most from lipogenesis?

Thank you, this blog is a gold mine!

Sorry for the delay, been ignoring the blog recently. It happens. These are good questions. I don’t think people have been generating the data which might answer them. If I had to take a wild stab I would suggest that FFA “leakage” is mimicing what should happen under low insulin conditions, ie fasting, where saturated fats are the preferred fats to defend blood glucose levels by inducing physiological insulin resistance. Under pathology the body tries its best…