I quite enjoyed Barja's review

but found this section a little uncomfortable:

Hmmmmmm. Plant based, healthy fruit and vegetables, bad animal fats. Not my sort of outlook really.

In another of his publications here

"It was also found that 6–7 weeks of dietary restriction are enough to decrease MitROS production and 8-oxodG in mtDNA and nDNA in rat liver (Gredilla et al., 2001a )".

Here they found, by eyeball, an approximately 50% reduction of in 8-oxodG in mitochondrial DNA after those six weeks of quite severe caloric restriction: 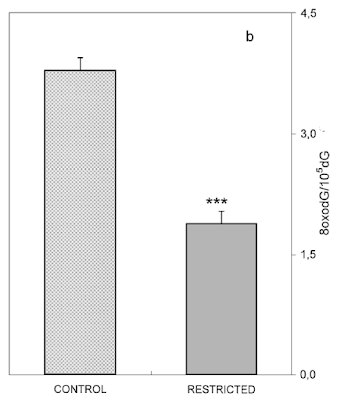 Now let's compare this with the degree of damage reduction (this time using the term 8-OHdG as the marker rather than oxo-8dG, which appears to be the same thing).

Here's the change in mtDNA damage marker in brain mitochondria using F3666, one of the worst ketogenic diets around: 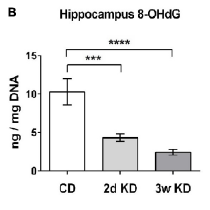 Just by eyeball I make the drop in mtDNA damage out to be greater than 50% by two days and something like 75% by three weeks. On ad-lib food consumption. No hunger.

Considering that F3666 does not extend longevity in mice (it doesn't shorten lifespan either, despite causing liver damage and it does actually improve health during ageing in rodents) this does, for me, slightly knock some of Barjas core ideas.

Labels: an aside, Barja

Spouting the vegan mantra might help keep grant money flowing - but sort of means he hasn't seen papers like:

or the Epic oxford papers - there are also some Japanese papers that found correlative dangers in vegan diets..

The vegan meme is a popular ungrounded narrative - glad they are leaving more meat and fish for me - buy I worry about their children's brains - growing brains need good fats and the sort of stuff found in meats - kids in the third world with poor vegan diets don't seem to recover even if they get a better diet later.

For instance, here in India, the doctors give hysterical advice about dangers of eating mutton and have lowered the demand significantly. Result is mutton is three times as expensive as chicken.

What is fatty acid composition of F3666?

Thanks, I've got the whole article now. It'll be interesting to see if this makes worldwide headlines (I haven't had time to look at the paper yet, to see how exaggerated the dailywire article might be).

No surprise, I had the same reaction.

"(this time using the term 8-OHdG as the marker rather than oxo-8dG, which appears to be the same thing)"

Yes, I think you're right. I wish these scientists could do consistent abbreviations.

So what would Barja's dietary recommendations look like if he knew this?

"In a lipid micelle, LOOH markedly produced 8-oxo-dG at a concentration one-tenth of that of H2O2....

So by all means replace animal fats with what appears to be the leading exogenous cause of DNA damage. Sigh.