TLDR: Excessive insulin sensitivity sets you up to become obese.

I have to apologise for citing Valter Fastingbar Longo, sometimes you have little choice. This paper

documents the physiology of humans who are homozygous for a large growth hormone receptor gene defect. They make their GH, lots of it. It does absolutely nothing, having no receptor. GH normally works in opposition to insulin on adipocytes, causing both lipolysis and systemic insulin resistance.

Also, in the absence of GH signalling, these people make no IGF-1 so are of dwarf stature. They are exquisitely insulin sensitive. As in here are the OGTT results. Dark lines are the GHR deficient people: 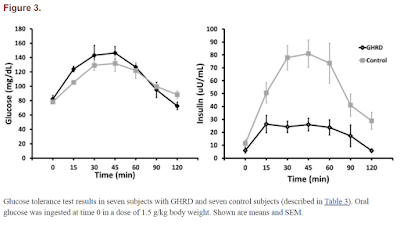 Plasma glucose is comparable to that of controls throughout, matched for BMI (and lots of other things). But just look at that insulin level, peaking at 25microIU/ml vs 80microIU/ml in controls. The dwarves are very, very insulin sensitive.

Let's put this in to context: The GHr deficient people are fat because they are insulin sensitive. There is no paradox. We are not thinking that their obesity should have caused insulin resistance, it's that their failure to generate one type of physiological insulin resistance has allowed pathological insulin sensitivity to prevail, hence obesity.

It looks to me as if these excessively insulin sensitive individuals have yet to reach their "ideal" metabolic level of obesity to counteract their lack of GH signalling. Interesting to wonder what determines the level of adiposity at a given age in the absence of GH signalling. That's not simple.

We have no data on RER under fasting or post prandially. But we can be fairly confident that the fasting RER will be low, reflecting high basal lipolysis from distended adipocytes and post prandial RER will be high as insulin action facilitates glucose metabolism and locks lipids in to adipocytes.

A bit like those insulin sensitive pre-obese humans a couple of posts ago. But these dwarves will have to become very, very obese to behave like normal overweight insulin resistant people.

Addendum, not worth a post in its own right but on-topic:

"This review paper discussed the mechanism of action of TZDs on weight gain and the so-called “glitazone paradox”, the phenomenon that TZD-associated weight gain improves rather than exacerbates insulin resistance".

There is no paradox. Insulin signalling improves with glitazones, this makes you fat.

I wonder if part of the conundrum that insulin resistance presents comes from the fact that we don't distinguish the different reasons. (Which is unfortunately how modern medicine works, we have a symptom "glucose doesn't get out of the bloodstream" and start treating it, but don't wonder why this happens.)

I would love to see some research on this, maybe I just haven't searched enough. But it would seem to me we can have three main actions that are triggered by insulin, and either of them can fail: (a) Glucose is converted to glycogen and stored in the muscles/liver, (b) glucose is converted to triglycerides in the liver, and (c) lipid cells store triglycerides. Seems to me that if (a) is impaired but (b) and (c) work, we'd end up with fat people that have normal glucose control. If (b) fails too we can't get rid of the glucose and become diabetic. If (c) fails but (b) works, we'd end up with very high triglycerides but perhaps normal glucose.

So, the first question is how we define insulin resistance at all. Personally, I've started to avoid the term recently. Is it that all three actions fail? Or just the muscles? Do we define "insulin resistance" by hyperinsulinemia, or by glucose clearance? And frankly, we have no idea how a single value like HOMA-IR relates to these 3 points of failure.

Again, I don't buy into the assumption that we're just talking about insulin tolerance here, which would imply that all 3 actions fail. Or, more precisely, some people might develop tolerance as a result of long-term hyperinsulinemia, but for others only 1 or 2 of the 3 actions fail. A very simple example is someone who eats a lot of glucose and doesn't burn it off, so the glycogen stores are simply full, which looks like insulin resistance from the outside. Another possibility is that glycolysis is blocked, as I sketched in a recent comment. Both would cause (a) IR only for muscle cells.

I'd assume that someone who is heavy on alcohol or fructose may end up with a fatty liver/pancreas, where only (b) fails. We have hepatic IR, glucose is no longer converted to triglycerides and people end up TOFI (which seems to be a thing with some alcoholics).

Back to GHRD. If this one causes (a) muscle cells IR, while (b) and (c) work, this would explain the observations. Glucose is quickly converted to fat in the liver and stored, fat metabolism is active, so they can burn their fat if they need it. Insulin levels will be moderate because the glucose is cleared quickly, so they won't necessarily develop tolerance to insulin. I wonder what their diet is? If it's low in glucose and ethanol then I'd expect that they won't develop hepatic IR (b). They will stay fat but healthy.

Addendum: We know that some substances can mimic insulin. WGA is supposed to block insulin receptors (http://www.sciencedirect.com/science/article/pii/089865689090068L) and we know about IGF-1 in dairy. It's possible that they bind differently to different receptors, and I'm not sure if this has been explored.

For example, the fact that people consuming wheat (Europe) used to get fat while people consuming rice (Asia) stayed lean may indicate that WGA (which is a wheat lectin) causes some insulin resistance to the muscles, while fat cells and possibly liver are less affected. (Of course, nowadays we all get fat and diabetic. And my prime suspect is the combination of high amounts of refined carbs with n-6 PUFAs.)

@F one thing that Peter has been shouting from the rooftops for quite a while is:

'I consider that one primary action of insulin is to inhibit lipolysis. Which makes it a driver of weight gain. Or, rather, it makes it a mediator of calorie trapping within adipocytes, which drives hunger (you needed those trapped calories)'


Which throws a different light on your item (c), not so much about the conversion and storage of ffa but about the energy supply that is cut off by the inhibition of beta oxidation etc.


I appreciate simple processed carbs more and complex carb sources less due to e.g. the agglutenin-lectin issue you mention but also because of all the other horrible things that raw untreated plants contain viz salicylate, oxalate, (di)terpenes, alkaloids, histamine plus other challenging amines, enzyme inhibitors, etcetera. I'm a great fan of food detoxification techniques nowadays. Most grains and seeds should probably be soaked or boiled, fermented, or soaked in ashes accordingly.

@P Oh absolutely, hyperinsulinemia drives obesity.
But the discussion here is about people who have fairly normal insulin levels and still get fat. And that's precisely the point I tried to make in that older comment to http://high-fat-nutrition.blogspot.com/2020/02/insulin-sensitivity-makes-you-fat.html: If you have selective insulin resistance you'll see different results. If only the muscles are affected (a) people will get fat but insulin levels may remain almost normal, if the glucose is cleared quickly via the liver (and it certainly will depend on the type of carbs, I'd say you have a much higher chance of this happening if you go high carb, low GI).

A theory is only valid if it explains the unusual cases. You can't ignore the black swans :) Here I'm trying to make sense of the black swans, the fat people who remain insulin sensitive, and the TOFIs. And I think you can't explain them if you assume a systemic insulin resistance, where all insulin receptors develop tolerance.

So I'm throwing out a theory here, that we're not looking at systemic IR but "local" IR. I don't think I found the holy grail btw :) (a new theory rarely is true), but I think there is enough substance that merits a closer look.

Note that we'll have a domino effect even with my theory. If we assume that only (a) is inhibited, the liver will still produce a lot of triglycerides, which will cause fatty liver/pancreas, probably reducing the capacity for glucose clearance. So in time we'll see higher insulin levels, which may trigger classic, systemic insulin resistance. But the initial state is that we have high insulin sensitivity in (b) and (c), people get fat quickly. At some point -- and this is pretty much what Peter says -- higher insulin levels will make fat cells (and probably the liver) more IR, and weight gain slows down or stops.

Case in point in an article that I just found: The growth hormones (that the subjects are lacking) will increase glycogenolysis https://www.ncbi.nlm.nih.gov/pubmed/18393170. That is, the subjects will store less glucose in their muscles due to an impaired glycogen metabolism, leading to a local insulin resistance that affects only the muscle cells and the effects I described in my earlier comments, because the liver is not affected. I'd say these people are fuelled by fat, glucose is converted to FAs and then burned.