As a counterbalance to the papers documenting the obesogenic effect of PUFA containing diets I'd like to have a brief aside about the Surwit diet. There's a nice list of the ingredients here.

The first thing to say is that it is based around hydrogenated coconut oil. I would guess this is fully hydrogenated coconut oil, though the manufacturers do not specify. To supply a small amount of PUFA some soybean oil is added to give just under 7% of fat as PUFA which, at 60% of calories as fat, translates to 4% of total calories as PUFA. That is low yet the diet is one of the most obesogenic on the market.

There is more to obesity than PUFA (gasp).

The whole drive of the Surwit diet appears to be to supply glucose in a form which will be rapidly absorbed and so allow penetration beyond the liver and in to the systemic circulation. Maltodextrin is used for this. The diet uses a medium chain length polymer of glucose which has a glycaemic index in the same ball park as pure glucose.

Then I got side tracked in to Surwit's early work. A great paper is this one using F1850 for a publication in 1988:

F1850 is still interesting despite having a bit more linoleic acid (around 7% of calories). This still feels like quite a low dose for a mouse diet. The paper has some great graphs. Let's have a look and ask some questions.

Take two mouse strains (Bl/6J and A/J mice), feed both on sucrose, maltodextrin and modest linoleic acid lard supplying about 7% of calories as PUFA. Both strains get fat, like this: 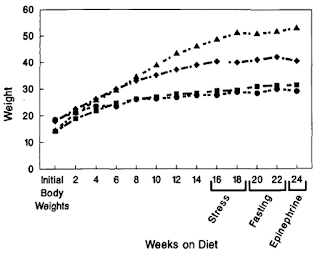 The bottom two lines are the two strains of mice on standard crapinabag and we can ignore these. Today's quiz is to identify the top two lines based on the fasting blood glucose/insulin data.

Here are the fasting insulin and glucose levels after 24 weeks of exposure to either control or obesogenic diet: 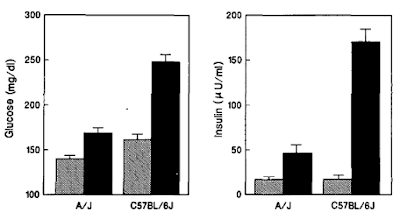 Grey columns represents the crapinabag fed mice, black columns the obesogenic F1850 diet fed mice. It is quite clear that while the A/J mice became modestly insulin resistant it was the Bl/6J mice which became severely insulin resistant, with marked increases in fasting insulin and glucose. On the same diet as the A/J mice.

Now, match the mouse strain to the upper traces on the weight gain graphs. We can ignore the crapinabag fed lower lines. Of the two upper lines one represents a set of mice which is fatter than the other. Are B/J or Bl/6J fattest? From the insulin data...

If you carry the idea in your head that insulin causes obesity you might expect the hyperinsulinaemic Bl6/J mice with a fasting insulin of 150microU/ml to be fattest. If you consider that the mice on sugar become fat because they find the sugary food more "rewarding" (it's the same food, idiot!) you might come to the idea that obesity is caused by overeating and that obesity secondarily causes insulin resistance (no sniggering at the back there). And both are incorrect.

The fattest mice are the A/J mice. They are fattest because they are the most insulin sensitive.

The A/J mice become "fat but fit" based on glucose/insulin levels. Given long enough they will, undoubtedly, join the Bl/6J mice but they have a longer way to go to become adequately obese to resist insulin. But I have no doubt this will happen on F1850.

I think the difference between the strains is genetic and that Bl/6 based mice generate enough ROS to generate significant insulin resistance at much lower levels of insulin signalling than B/J mice do. If I had to guess at a gene I would go for their truncated supercomplex assembly protein causing failure of supercomplex formation and so allowing electron leakage to molecular oxygen from the ETC at times when no such thing should happen, at least not until the CoQ couple is a great deal more reduced.

But that's just speculation, which is fun.

Humans look more like B/J mice (normal ETC) than Bl/6J mice to me.

Bottom line: Insulin signalling is what makes you fat. Insulin resistance resists this. It's all in the data.

Hi Peter
Thank you for the nuanced take on insulin and insulin resistance. I am trying hard to learn about the causes of obesity and the role of the different hormones. If you don't mind, I have a question for you about lipedema (this is a fat disorder, where fat is largely stored in the hips and thighs and is very resistant to dietary and exercise changes). Women with lipedema are generally not insulin resistant and for the same BMI, have a lower incidence of Type 2 diabetes. I think this ties in with your conclusion that the amount of insulin is the problem rather than the sensitivity to insulin. Thanks
Sarah

Just thinking logically, the decreased risk of DMT2 would suggest an oddly distributed hypersensitivity to insulin. It also follows the distribution of fat loss of acquired lipodystrophe, though there is no suggestion that I can see of it being auto immune. You have to wonder whether going to something like the PKD might be effective. But I can see that the PKD without even a tenuous evidence base would be difficult. But people do try these things. I doubt anyone would have suggested carnivory for depression 20 years ago, so who knows?

Thanks Peter. Lipedema is an odd disease, for sure. It's possible to have very little abdominal or visceral fat, but huge and painful fat distribution in legs. In my case, with many lipomas too. I am trying a PKD diet, with around 20% from carbs, but may have to reduce that further. After 6 months, it has made no difference to my BMI. Do animals ever get something like lipedema?

Anything issue with pathological insulin sensitivity might need profound hypo-insulinaemia to resolve. Just logically, zero carb might be more likely to help...

Oh, animals? No, not to my knowledge.

"There is more to obesity than PUFA (gasp)."

I was of course curious to see what Surwit et al were up to here. They have a very fat-agnositic view of diet: fat is fat. He changes the formulation of his high-fat, high sucrose (HH) diet from F1850 to D12330 in 1992, but still uses the old studies as references for the new ones, despite switching from lard to hydrogenated coconut oil.

"...we used mice and precisely defined isocaloric diets to compare the metabolic effects of saturated fat from coconut oil, unsaturated fats from soybean oil and fructose. To our knowledge, this is the first study not only to compare the effects of these three dietary factors in mice, but also to perform genome-wide expression profiling and metabolomics analysis of livers from animals fed a soybean-oil enriched diet."

Bingo: "Four isocaloric diets with 4.87 kcal/gm (5.56 kcal total) (Table 1) were formulated in conjunction with Research Diets, Inc. (New Brunswick, NJ). The diets are based on the Surwit diet..."

The title says it all:

"Soybean Oil Is More Obesogenic and Diabetogenic than Coconut Oil and Fructose in Mouse: Potential Role for the Liver"

She was subsequently hired to show that low-LA GMO soybean oil (Plenish) is less obesogenic than regular soybean oil. Which she did.

Neat bit: "One of these genes, Pdk4, which was upregulated in SO-HFD livers, is known to inhibit the pyruvate dehydrogenase complex that links the TCA cycle with glucose and fatty acid metabolism. Repression of the pyruvate dehydrogenase complex shifts the balance towards gluconeogenesis which could result in hyperglycemia [76]. Consistent with our findings are reports that PDK4 expression is increased in diabetics [122] and that Pdk4-/- mice are resistant to HFD-induced hepatic steatosis and are more glucose tolerant [123,124]. Thus Pdk4 upregulation may be a contributing factor to both lipid accumulation in the liver and the development of diabetes and glucose ntolerance in SO-HFD mice."

That could be a problem...

(I was looking for some sort of explanation as to why he had switched from F1850 to D12330, and changed the fat used but still added soybean oil. Couldn't find it, Research Diets just mentions that he called them up and specified what became D12330.)

Ha! These people are so superficial. PDK4 is upregulated in the liver of diabetics because that's how gene expression tries to protect you from the ministrations of the PUFAphiles. PDH complex probably down regulates because normal soybean oil is supplying a sh!tload of low FDAH2:NADH linoleic acid which means the supply of acetyl-CoA will be in excess of the cell's needs and getting more from pyruvate is not needed. So the liver uses PDK4 to avoid even more of a disaster than the cardiologists are pushing for...

Just looking down at the ETC level.