When I draw my doodles of early energetics my standard protocol is to have low pH, high H+, oceanic region at the top. The ocean is above.... I have the vent derived, geothermal, low H+ region at the bottom, that's were the rocks are.

Once people start looking at modern membrane complexes there is no need for such conventions and figures are usually produced the other way up. So when we want to look at modern Ech and derivatives I think I have to turn my proto-Ech doodle upside down like this: 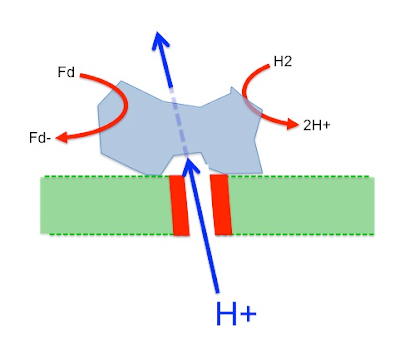 I have, very naughtily, butchered a cartoon of a modern Ech (out of the lovely paper from Efremov and Sazanov) to produce this image of my concept of proto-Ech. As in the doodle, this must use a geothermal proton (not Na+) gradient and does not look to be reversible: 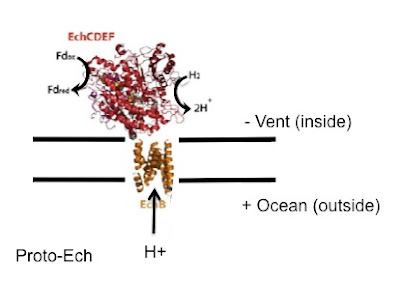 Note that I've altered the black arrows to match my red arrows, showing the generation of reduced ferredoxin from oxidised ferredoxin and the consumption of (primordial) H2 under the influence of oceanic proton flow through the brown membrane protein labelled EchB but which I will refer to from here onwards as NuoH, or a homologue there-of. Their original image of a modern Ech on which I based my proto-Ech is this one: 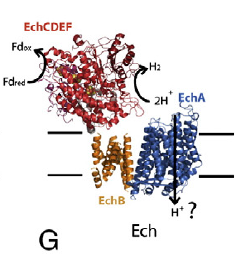 Again, for various reasons, I will refer to the blue subunit EchA as NuoL. This modern Ech is energy converting, it pumps protons through the blue anti porter homologous to NuoL. All of the arrows are now in their modern pumping direction. The pump is powered by reduced ferredoxin (from elsewhere in the cell) and produces hydrogen as waste. Typical bacteria using this Ech might be E coli, to produce flammable flatus. The source of reduced ferredoxin is any catabolic process. Fermenting starch in the anaerobic colon has predictable results in this department.

An understanding of the initial role for this antiporter is crucial to any logical approach to bioenergetic evolution. Equally interesting are the adaptions of subunit EchB (homologous to NuoH) to changing the activity of NuoL from antiporting to Na+ pumping.

We can now look at a NuoL type antiporter embedded in a membrane without any power supply. It will consume membrane proton potential by allowing protons to move inwards and expel Na+ ions outwards in exchange, like this: 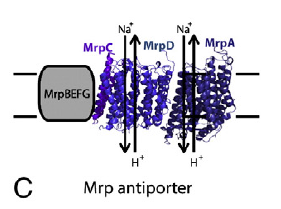 It can do this in a modern bacterium because there is a proton gradient, created by complex I (or any other energy converting complex/hydrogenase), i.e. protons are available to travel down a concentration gradient in to the cell, much as they might have done in primordial times. Na+ ions are forced out against a concentration gradient, in this case because this particular microbe lives in an extremely high Na+ environment. If you delete the Mrp genes for subunits MrpD and MrpA you cripple its antiporting ability. Engineering back in homologous proton translocators from a modern complex I restores the full antiporting ability.This tells us that the modern proton translocators of complex I are still antiporters but their antiporting is kept suppressed. I would suggest by NuoH.  Note that the Mrp antiporting complex has no NuoH subunit.

NuoL does appear to be distantly related to NuoH, possibly by very ancient gene duplication. The conservation of form can be seen in these lovely images from Marrreiro et al. The gold ribbon is NuoH and the grey one is NuoL. The channel form is clearly visible. I consider NuoH to be homologous to the original proton ion channel from my proto-Ech doodle and its relative NuoL to be homologous to a prototypical Na+/H+ antiporting derivative. 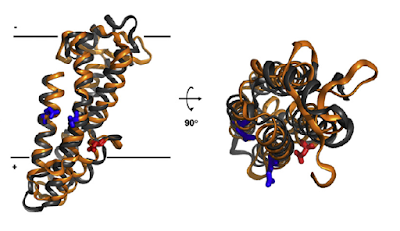 I think that the initial gene duplication/modification would probably have produced an uncontrolled antiporter which would have produced a dramatic fall in intracellular Na+ concentration. This activated ATP synthase, making it function as an ATP generating rotor turned by Na+ re-entering the cell. This would generate ATP as fast as the proton gradient could produce a Na+ gradient. Very fast.

Possibly the first priority after the generation of a Na+/H+ antiporter would be to work out how to stop it. Here's how:

Proto-Ech is essentially sidelined as a source of high energy compounds by the novel Na+ energetics system. Mutations in NuoH or the NiFe hydrogenase would no longer be fatal, so there is the scope for the now redundant proto-Ech to be converted to a metabolic sensor and switch.

Excess reduced ferredoxin indicates a surplus of energy supply, almost certainly driven by over zealous antiporting. If this excess reduced ferredoxin is allowed to drive through proto-Ech, pushing electrons towards the FeNi centre and beyond to reduce protons to H2, this sign of excess could easily be adapted to produce a conformational change in NuoH.

NuoL is stuck on the side of NuoH. Changes in the shape of NuoH produce changes in both shape and function in NuoL. All that is needed is for excess reduced ferredoxin to produce a conformation change in NuoH and it could shut off the antiporting in NuoL. Having the antiporter (NuoL) glued to the side of NuoH allows the switch to function effectively.

So here is the next question: What happens when the geothermal proton gradient fails? For a start, the free lunch from antiporting disappears. We still have the back up of ferredoxin energetics from electron bifurcation but nothing to compare to the glut of ATP from the now diminishing Na+ energetics.

What is needed is some way of pumping Na+ out of the cell which could replace the simple and exceedingly easy antiporting system. I've already got reduced ferredoxin acting through redundant proto-Ech as a brake on antiporting, as part of a control system on Na+ energetics. If we were to generate a change with allowed us to "over-apply" the ferredoxin brake we could, plausibly, go so far as to do more than simply stopping Na+ entering the cell, we might actually start to reverse Na+ ion flow and pump it outwards. Na+ pumping by using the energy derived from reduced ferredoxin.

Proto-Ech is now running in reverse and pumping Na+ ions. It is conserving energy as a Na+ gradient and so is now a true Ech, there no longer anything "proto" about it. It's reversible. Na+ energetics are restored and the core power supply to the cell is electron bifurcation supplying power to drive Na+ energetics.

That's how it stays until cytochromes come along.

So NuoH pushes NuoL to stop antiporting and start Na+ pumping...interesting inhibition of one action leading the appearance of a new one.

Somewhat off topic; your comment "I think that the initial gene duplication/modification would probably have produced an uncontrolled antiporter" reminds me of the competing hypotheses in genetics about subfunctionalization and neofunctionalization. Seems like subfunctionalization is the new kid on the block https://liorpachter.wordpress.com/2015/05/26/pachters-p-value-prize/

Completely off topic but totally in your wheel house is "Adaptive changes in amino acid metabolism permit normal longevity in mice consuming a low-carbohydrate ketogenic diet". Here's the full-paper https://www.dropbox.com/s/cz4f91zjds3aqdu/Adaptive%20changes%20in%20amino%20acid%20metabolism%20permit%20normal%20longevity%20in%20mice%20consuming%20a%20low-carbohydrate%20ketogenic%20diet.pdf?dl=0 A lot of it isn't new to you but it's quite an interesting paper nonetheless.
- some interesting mouse model-dependent effects on total weight & lean/fat mass % ...here, mice weighed less than chow-fed counterparts but had better greater lean mass as a % of body weight
- 'paradox' in KD-fed mice between increased their hepatic beta-oxidation intermediates (acylcarnitine, carnitine) gene profiles & reduced serum acylcarnitine, carnitine
- in KD-fed mice "this down-regulation of AA catabolic genes likely offsets the low concentration of protein substrate in the diet"
- "KD consumption caused increases in the expression of chemokines/cytokines or genes related to pro-inflammatory pathways" with no effect on longevity

Maybe you'll find an interesting take on it no one had the decency to think of...Wouldn't be the first time!

Raphi, it's not simple to see exactly how the anti porter works. The generic amino acid essential to Na+ translocation appears to be the aspartic acid marked in red in the ribbon diagrams, which means that NuoH may be the Na+ pumping channel. Apparently you need at least two ion channels to anti port, it's never just one protein working like a seesaw... So which channel is the proton translocator and which is the Na+ translocator is not completely clear. The methanogen methyltransferase has three channels and the one thought to translocate Na+ has an aspartic acid in exactly the correct place to suggest it might be some sort of homologue of NuoH. Of course NuoH is the core of complex I and currently runs on H+ so are we talking about a later change of ion rather than a later reversal of which channel is used for pumping when pumping is needed? It's looking like NuoH was the one initially used for pumping Na+, which suggest that NuoL was the proton channel. Which is hard to make sense of! Unless NuoL could be shifted away from the NiFe hydrogenase as the vent gradient was lost.....

It's interesting that people are finally looking at longevity in mice on ketogenic diets. The gain was small and ns, but any gain when you are eating enough omega 6 PUFA to cause NASH is quite impressive! There are an awful lot of questions raised by the study. Such as why no physiological insulin resistance????

Ok, I think I've at least found North now with your question "...are we talking about a later change of ion rather than a later reversal of which channel is used for pumping when pumping is needed?"

Yes I was wondering about the lack of physiological IR - in humans we see it peripherally, but not in the brain if I recall correctly.

ALT was high in both the long-term KD rats & the long-term normal Chow rats (even a bit higher in the normal chow ones actually). Really makes you think about how "good" normal rat chow is. Not a very high bar of health I fear.

The abhorred Séralini (in the US that is, not in FR) published "Laboratory Rodent Diets Contain Toxic Levels of Environmental Contaminants: Implications for Regulatory Tests" in PLOS ONE on July 2 http://journals.plos.org/plosone/article?id=10.1371/journal.pone.0128429 I haven't yet got round to reading it.

"We describe the contamination with environmental pollutants of 13 laboratory rodent diets from 5 continents" If the conclusions stand up, the implication for murine studies are disastrous...