Let's begin with electron micrographs of the structure of the precipitates in Nick Lane's hydrothermal vent simulating bench top reactor.

At low power by scanning EM we have: 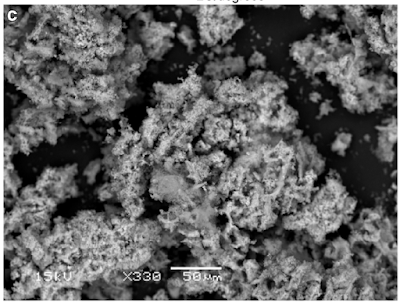 At high magnification by transmission EM we have: 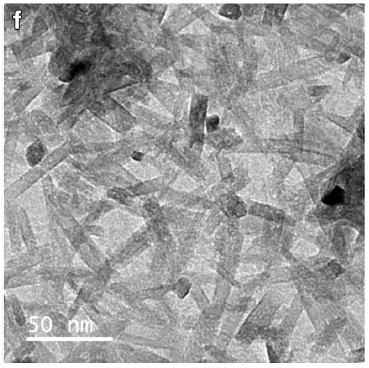 I've sketched what I think might be happening within the latticework of these amorphous precipitates. As the fluids mix it's not simply linear. There will be channels, eddies and incomplete barriers.

You have to bear in mind that this is all completely made up. It's a thought experiment. This might be true, it might not be. Here's my guess: 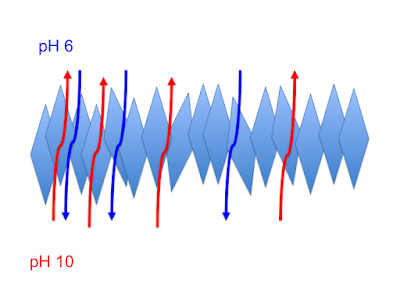 What we do know is that this reaction is taking place: 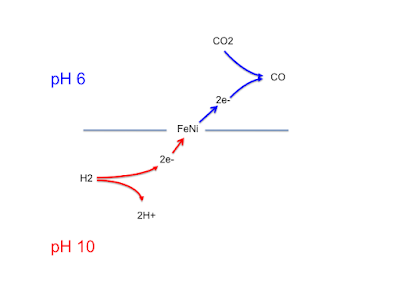 We know because the CO goes on to reduce to formate and Nick Lane picked this up in respectable amounts from the fluids flowing through the structures shown in the electron micrographs.

The horrible slide below is the above reaction turned on its side to fit in with the first sketch: 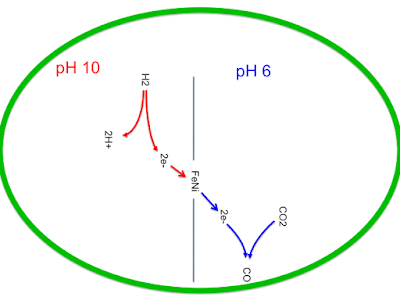 The green ovoid shows the sort of place where I think the reaction might be taking place, but actually all over the doodle I've produced: 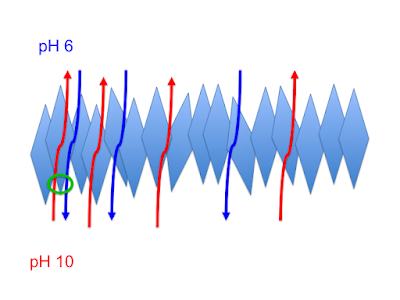 I would suggest the precipitate might be rather high in FeS and only doped with Ni in places. The structures in the micrographs are a lot bigger than one Fe atom across. Let's show an FeS crystal structure doped with Ni. This allows the low redox potential electrons from H2 at pH 10 from one FeNi cluster to be conducted through FeS clusters to another FeNi cluster on the other side of the crystal, where a second catalytic reaction can take place. CO2 was common in the ocean and vents so we can have step two as CO2 reduction: 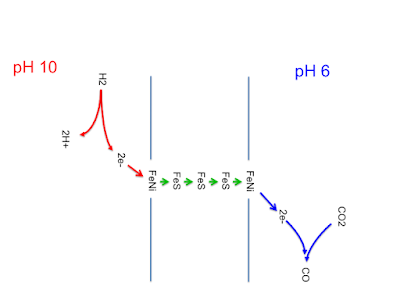 I would view the second FeNi cluster on the right hand side as the potential origin of CODH/ACS, separated off in to the cytoplasm and of no further interest in the development of a proto-Ech. I've flipped back on to a more normal orientation for the rest of the pictures as reading on one side does horrible things to my brain. In the next picture I've got the first FeNi centre accepting low potential electrons from H2 at pH 10 and donating them, not to a structural FeS cluster as previously but to a ferredoxin, a soluble version of FeS, at pH 6 to give a an FeS moiety with a redox potential capable to reducing CO2 to CO, but in transportable form. Able to wander off elsewhere in the cytoplasm as the core power unit of the cell, to where ever CODH/ACS has ended up. Ferredoxin is one of the most ancient and simple peptides, possibly worth a post in its own right. Below shows the need for a low pH region close to the FeNi moiety to allow this conservation of reducing power: 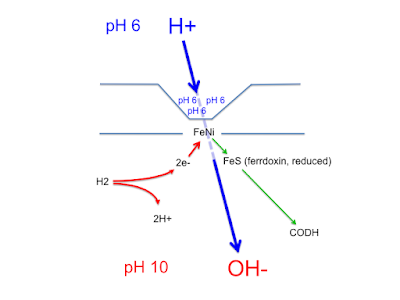 The above diagram is getting rather cluttered so I thought it would be useful to simplify matters in to an enzyme based around a (not shown) catalytic centre converting the energy of H2 to reduced ferredoxin using a localised area of pH 6. This is the logical origin of the type 4 FeNi hydrogenases which are still in ubiquitous use today: 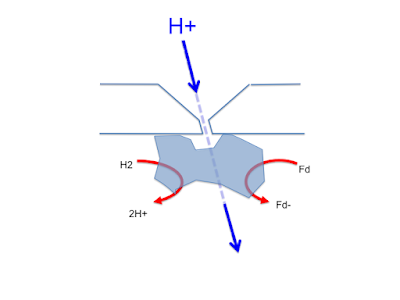 The hydrogenase is core to Ech but we need another step to get us from a hydrogenase using the pH gradient to a true proto-Ech. That step is the formation of a protomembrane. The protomembrane is freely conductive to both protons and hydroxyl ions but will stop the FeNi hydrogenase getting close enough to the inorganic cell wall structure to get a decent look at a pH of 6, needed get ferredoxin reduced. 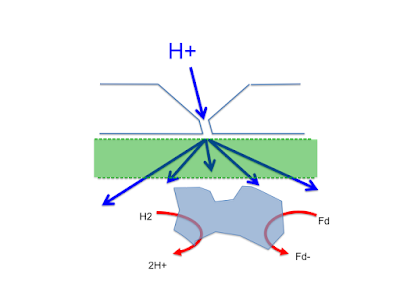 What is needed is a protein structure within the protomembrane which can channel protons tightly through from the inorganic wall across the leaky protomembrane to allow the FeNi hydrogenase to get a decent look at a pH close to that of the ocean: 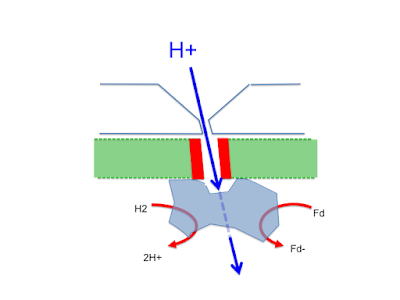 By this time the inorganic cell wall is no longer strictly needed but the protocell is clearly still completely dependent on an external pH gradient to generate reduced ferredoxin. I would call this port/enzyme combination a proto-Ech: 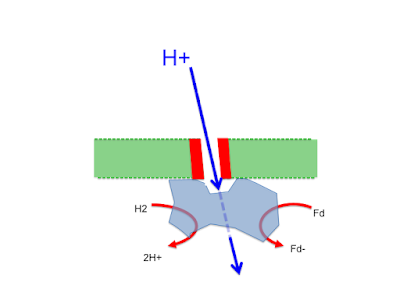 I think it is a reasonable assumption, if this thought train is correct, that there is no way that a gradient of Na+ ions can replace a gradient of H+ ions, you simply wouldn't get the pH 6 within the enzyme by translocating Na+ ions. The modern Ech has a second membrane protein built in to its structure, an anti porter. That will transport Na+ ions, and is reversible.

This is deeply interesting.

Have to say: even if no demons are insight, there will be a devil or two in the details somewhere! I have a feeling we are back near that bacterial battery again ie proton flow through a semi-permeable salt bridge, compensatory electron flow through 'wire'.

I had a passing thought about electron currents vs proton currents - in terms of electrical potential it's trivial that moving a + charge out of an area has the same relative effect as moving a - charge in. In terms of potential difference ==> electromotive force, less negative is identical to more positive. So then I thought about semiconductor theory and had the idea of protein 'transistors' - cell subunits running hard wired protein logic.

( It turns out that various groups are working on protein semiconductors eg
http://www.nature.com/nnano/journal/v7/n3/full/nnano.2012.7.html )

There's nothing particaularly relevant to your detailed proposals here but I wonder if the electron/hole approximations used in semiconductor physics would have some applicability?


I spent many, many hours on this paper.

It contains a number of logical flaws but is interesting never the less.

which is very interesting re quantum tunnelling within DHA (probably real) but marks Crawford out to me as, well, not a person of note. I’m unable to wet my knockers over DHA. Does the Frohlich effect matter? Possibly, but people need to write better papers than this to convince me that they remotely know what they are talking about. Did DHA “cause” a big brain. Well duh, no. An evolutionary advantage to a bigger brain made a bigger brain worth developing. What bricks are available? Ah, DHA, I’ll use that. DHA “controls” DNA to generate a bigger brain? Don’t make me laugh.

And don’t even start me on this embarrassing paper

Ms Bradbury is welcome to join me for a picnic on Caister beach. My kids and their great grandad Victor can gather us a DHA/protein rich lunch while I write a symphony and correct her paper at the same time.

But yes, the base of Ech looks a lot like a field effect transistor to me….

Might be more digestible if it was printed on seaweed.

Or carved in to pre set concrete

This is the antidote:

But just trust Cordain to throw away the mesenteric and sub lumbar fat. Anyone would think he was a lipophobic PUFA lover. Oh.....

But then I would, wouldn't I!

Yes I like that one too. Since I first read it I have been wondering how much pemmican could have been made from one elephant.


Vis-a-vis W3's, various fats and protein, you can get them from dryland molluscs, termites, amphibians, moths, grashoppers, myriad other small creatures and reptiles. I have read (somewhere?) that there is as high a density of nutrients in the Aus. drylands to be had from termites and reptiles as there is from big game on the African savannah.

You can look how fat elephant is
http://tristopia.blogspot.be/2012/04/tasty-elephant.html

as can be seen, the Gabonese to not fear fat as the sauce is made of red palm oil.