On phosphorylating AKT: Interleukin-6 and a tale of two (or three) studies

I've spent the last few days looking in great detail at this next paper. Mostly I'm interested in the effect of subcutaneous fat transplanted to the omentum/mesentery. It does Good Things, the title says it all. I'll probably post more about it soon:

Even transplanting supplemetary monstrousvisceralfat to the omentum/mesentery of recipient mice improves their insulin sensitivity (admittedly ns). I like this research group. They are reporting data and don't seem to have a specific point they are trying to prove. The down side is that I think their CLAMS equipment, core to understanding certain aspects, didn't work very well. You can tell they feel the same way by the turns of phrase they use to describe some of their utterly inexplicable peripheral data like RQs. I'll call it the Kahn paper.

This next paper has Konrad as senior author. He has an agenda. Just click on the author to see his other publications. He knows monstrousvisceralfat is evil. He just needs the correct model to show this. This one hit paydirt:

Kahn's group transplanted epididymal fat in to the mesentery and omentum of recipient mice, this drains to the liver directly. By their surgical technique some of this fat will have also had systemic drainage. They waited for 12 weeks. They then ran an hyperinsulinaemic euglycaemic clamp. There was a modest (ns) improvement in insulin sensitivity. They checked the histology for macrophages, there were a few. They checked these for IL-6 production, it was minimal. Happy fat, happy mice, no hepatic insulin resistance.

Konrad's group also transplanted epididymal fat in to the mesentery of recipient mice. They waited for five weeks then did a clamp and showed marked hepatic insulin resistance. There was no increase in portal FFAs or liver triglycerides. They stained the fat for macrophages. There were loads. They checked for IL-6 production. There was loads. They did it all again but with IL-6 knockout mice. Minimal macrophages in the adipose tissue, obviously no IL-6, no insulin resistance in the liver.

Kahn's group check for this and found nothing of the sort. What's going on?

It took me about 12 seconds on google to pull up this abstract. It's not terribly important but does bring home the functions of IL-6, there are many:

IL-6 is deeply involved in wound healing. Obviously IL-6 does cause insulin resistance, we know from Konrad's study. And we know that all of Konrad's implants were inflamed and secreting IL-6 at the end of the study, five weeks after the surgery. Was that because visceral adipocytes are just evil and want to kill us with IL-6 or is it because the healing process after transplantation uses IL-6 and is incomplete at five weeks? What if they had waited another whole seven weeks before testing at 12weeks?

In Kahn's paper the beneficial effect of adipose transplantation showed best for SC fat placed in the mesentery/omentum. The benefits started to show in bodyweight and fat percentage at eight weeks and were more obvious at 12 weeks post op. The hyperinsulinaemic clamp at 12 weeks showed insulin sensitivity was improved, p less than 0.05 in this group. The visceral to mesenteric transplants were similar but not as marked, mostly p stayed above 0.05.

Kahn's paper was 2008. Konrad's was 2011. Who to believe? Who might have read whom and worked out a counter study? Perhaps the matter has now been pretty well settled by the surgeons mentioned in the last post (Oregon excepted)?

I think it is quite likely that over-distended adipocytes do produce IL-6. But you're not going to show this in normal mice eating normal chow.

Clinical aside. If a case with pancreatitis, underlying an acute abdomen, ends up as an ex-lap, you get to see the state of the omentum and mesenteric fat under necrotising pancreatitis conditions. It's not pretty. In view of IL-6 and insulin resistance it should come as no surprise that acute pancreatitis is associated with diabetes, which resolves as the pancreatitis does, assuming a good outcome. Not always, but it's well recognised. I think IL-6 as a cause of hepatic insulin resistance is very real. I also think it is total artefact in Konrad's paper but, if it could be made to happen as a direct result of severe obesity (about which we have no idea from Konrad's paper), I might consider it to be a messenger. Looks like this hadn't happened in the morbidly obese folks going under the knife.

I found a mini-review by that one group of successful omentectomy surgeons in Oregon, listing all of the omentectomy studies which have failed to improve insulin sensitivity (no explanation was offered), in which there is actually one very small study mentioned in which an omentectomy only was performed, removing just under a kilo of omental fat on average. That's a lot of omental fat in my book. Not only that, but the subjects were all obese and diabetic. I mean, visceral fat, hepatically drained, distended adipocytes, insulin resistance. How could an omentectomy fail? Spectacularly is the word and the authors say so point blank. I'd already decided I like these omentectomy-only surgeons before I found that three of them are part of Atkins Center of Excellence in Obesity Medicine. They might just share my biases!

Anyone wanting that last paper, it's here: 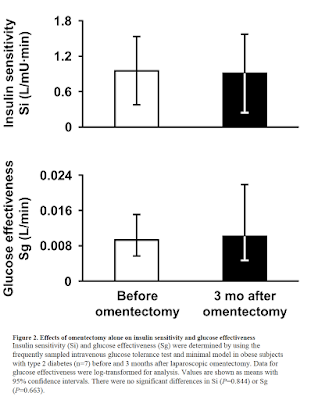 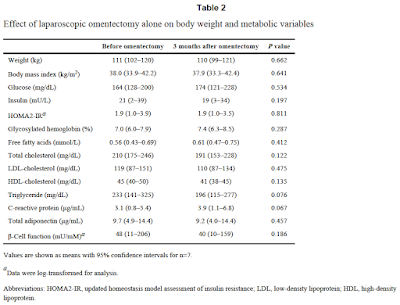 I particularly like the rise in HbA1c, statistically ns but clinically perhaps so...
Posted by Peter at Thursday, March 08, 2018

Labels: On phosphorylating AKT: Interleukin-6 and a tale of two (or three) studies

Well, that's interesting. I'm interested in this because I am in the, perhaps unusual, position of knowing exactly how much 'visceral fat' I have. I have taken part twice (last year and in 2009) in a 'body composition study' (in Ireland - to build up a database of body composition for the country) and in the follow-up last year they were able to give a much more detailed report than the first time (which was pretty good). They must have got a new DEXA scanner. So, according to that I have 347g of visceral fat. It didn't seem much to me when I read it, I mean it's less than a pound (about as much as the butter I currently have in the fridge) but these severely obese people only have - variously - 2-3 times what I have. I'm female, 164 cm tall, weight 58 kg and have a BMI of about 21 and a total body fat of about 23% now I think; in 2009 I weighed 51 kg and had a BMI of 19 and a body fat percentage of 17.5%. Since then I've aged 9 years, gone through menopause and also a fair bit of emotional stress, even trauma.

That's very interesting Jay, to me 800g sounds quite a lot. It makes me wonder what % of the omental fat the surgeons actually managed to remove. There are a stack of rodent/canine studies which show omentectomy in an excellent light for improving insulin sensitivity. But of course you can be a lot more gung-ho in de-omentalising a lab rat than you can a human surgical volunteer.

Never the less I find it very hard to conceive how removing a chunk of the body's most insulin sensitive fat cells, which should act as a glucose sump, can improve overall insulin sensitivity... It's odd and only plausible if the FFAs from the omentum really do impact hepatic insulin sensitivity. That seems remarkably difficult to demonstrate.

This flurry of posts on visceral fat has this layman wondering a lot of things. For example, if VAT is more insulin sensitive, does this mean it is the first adipose tissue to accumulate lipid in response to whatever packs more fat into adipocytes? If not, I'd think there is some other property of the adipose tissue which determines that.

Also, musn't there be a base level of VAT that everyone carries around? Even my tall, slender, energetic, athletic, non-low-carb,15-year-old grandson must have some VAT which may one day accumulate mass.

I'm also reminded of some posts Kindke wrote a few years ago about pre-adipocyte differentation into full-blow adipocytes and the related epigenetics. I assume he was discussing subcutaneous adipocytes, but I wonder if the same principle, or maybe something different, applies to visercal adipocytes.

Bob, Peter: is it not also the mythical 'brown fat' that has futile cycles and generates heat? Since hearing about it in biochemistry class 35 years ago (and ever since wishing I'd been paying proper attention at the time) always thought I had that. I've always been skinny and noticed that if I overeat - or overdrink - I (used to - less reliable now as I've got older/menopausal) have a kind of internal furnace that kicks in in the middle of the night and could sometimes wake me up with the amount of heat I was putting out.

Creeping fat is a specific type of mesenteric fat that wraps around the intestines in IBD. It's evil as well, as it appears in conjunction with active inflammation, and because obesity and inflammation etc. One supposition is for it to be a response to bacterial translocation, as it is rich in macrophage and il-6 (also anti-inflammatory cytokines). Maybe it is a function of a corrupted healing process... I've seen it mentioned in a couple of places that hyperinsulinemia is an independent protective marker for remission of disease activity, interestingly.

Jay, alcohol even in moderate amounts will do that a couple of hours after consumption. Conventional wisdom has it that this is due to various hormones going back to normal levels.

Could also be down to increased permeability of intestinal linings allowing bacterial toxins into the bloodstream, or due to the body trying to burn off these nasty carbs. Does sugar have the same effect on you?

Bob, the clamped glucose uptake tracer studies say exactly this. It should, theoretically, develop the largest adipocytes soonest so leak FFAs first. That’s the point of the lipophobes. Except finding the data is not proving easy, hence the IL-6 was so welcome in Konrad’s study!

Eric
About sugar I wouldn't know - haven't really eaten enough of it in years to notice any effect!