This first paper is very neat. They enrolled study subjects who were scheduled for an elective laparotomy and persuaded them to consent to an IV bolus of insulin during surgery and to allow biopsies of SC fat and omental fat to be taken at the 6 minute mark and at the 30 minute mark after this bolus. They were given some IV glucose to keep them alive after the insulin. Omental fat is possibly the most visceral of visceral fat depots, probably similar to mesenteric fat. Here's the paper:

This is what they found. The black squares are the omental fat: 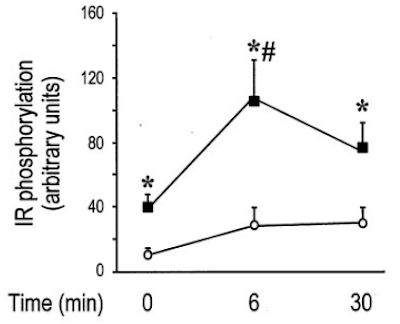 The x axis is non linear. Insulin signaling kicks in much faster in visceral adipocytes and is more effective at activating the whole signaling cascade (phosphorylation of AKT included) than it is in subcutaneous adipocytes. As the authors comment:

"We show that visceral fat is characterized by higher expression levels of specific insulin signaling proteins and more pronounced and earlier activation of the insulin receptor, Akt, glycogen synthase kinase (GSK)-3, and ERK-1/2 in response to insulin".

I think that it is unarguable that visceral adipocytes are more insulin sensitive than subcutaneous adipocytes.

Just to confirm that bias, this next paper is looking at glucose uptake in volunteers, using all sorts of clever non-invasive techniques. And some of those volunteers were obese. I think it's very clear that visceral fat, under hyperinsulinaemic euglycaemic clamp conditions, is more insulin sensitive than subcutaneous fat. Any visceral fat, any subcutaneous fat, any bodyweight of owner. From this paper 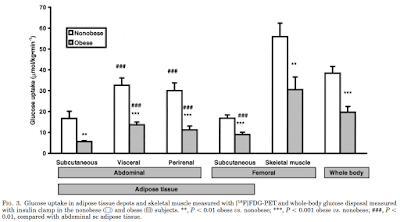 First and 4th pairs of columns are SC adipose tissue, 2nd and 3rd are visceral. Even in obese subjects the glucose uptake by visceral fat, under clamp conditions, is higher than in SC adipose tissue. Lots of significant p values.

Now the flip side, rather more speculative here: let's revisit this paper from several years ago, looking at healthy humans under hypoinsulinaemic states:

Ignore the mindset of the researchers, just look at their data: 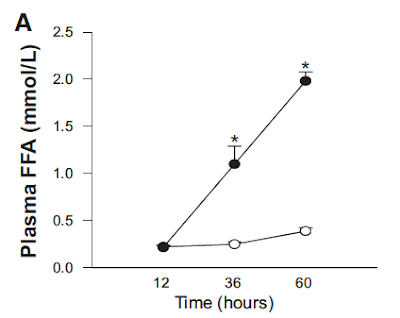 In a normally fed Dutchman the fasting FFAs are around 0.2mmol/l at some time in the morning. This is the amount of FFAs being released under a plasma insulin of about 13.0microU/ml. At this level of insulin I very much doubt if any of these FFAs are coming from visceral adipocytes because insulin is still too high for this. This a workaday "ready for breakfast" sort of a combination of FFAs and insulin. I think it is very reasonable to consider that these FFAs are coming primarily from the subcutaneous adipose stores. 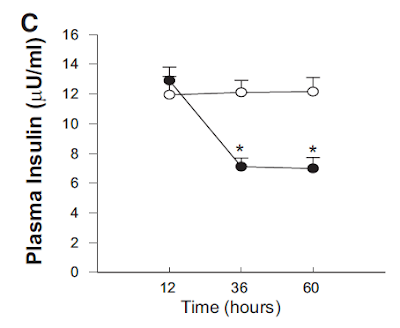 By 36 hours of fasting insulin has dropped to around 7.0microU/ml and it stays there. At this level of insulin we have FFAs rising through 1.0mmol/l to 2.0mmol/l, that's very high. Insulin is now very low, low enough for visceral fat to release a lot of FFAs and the body is set up to run on fat and ketones. It could do with some hepatic insulin resistance to facilitate hepatic glucose output and the specifically portal vein draining fat depots (omental and mesenteric) are set up to do exactly this. Evolution has punished, by non survival, individuals who failed to follow this pattern.

I think it is a pretty sound case that visceral fat does very little, other than hoover up a few calories, while ever insulin is above 12microU/ml. In the USA insulin probably never falls below this level. If you have to get up at 2am for a few bagels, doughnuts or a bucket of (low fat/high sugar) ice cream your body will forget what an insulin of 12microU/ml ever felt like.

Why not chop it out? I mean its full of fat. All people who have metabolic syndrome have tons of the stuff. Really, it has to be the root of all evil. You know, fat... But:

"Omentectomy does not have an ancillary short-term significant impact on the components of metabolic syndrome and does not induce important changes in the inflammatory mediators in patients undergoing LRYGB. Operative time is more prolonged when omentectomy is performed".

"The theoretical advantages of omentectomy in regard to weight loss and obesity-related abnormalities are not confirmed in this prospective study. Furthermore, omentectomy does not induce important changes in the inflammatory status in patients undergoing SG".

These people got paydirt:

"Omentectomy added to a LRYGB results in favorable changes in glucose homeostasis, lipid levels, and adipokine profile at 90-days"


but the changes were small and didn't look particularly clinically significant to me. But then, I am very biased. Better hope this last group aren't effective medical politicos!

Bottom line: Visceral fat does not cause metabolic syndrome. Association is not causation. Omentectomy is no panacea (no sniggering at the back there) unless you come from Oregon, with apologies to more sensible folks from Oregon.

Labels: live humans. They're just like mice!, On phosphorylation of AKT in real

Yes, thanks Peter. Reading your recent series of posts (and catching up on lots I've missed over the last 5-6 years - I've been 'away' - life got in the way as it does) I want to understand what is visceral fat for? As it surely didn't evolve to kill us.

Jay, if you need to run from a sabretooth tiger, visceral fat will slow you down less than peripheral.

If you are an inuit, you may prefer subcutaenous to keep you from freezing.

Pass, is that a rather messy view of the origin of the universe?????

Jay, I think it's rainy day fat. What you don't need immediately.

'Fraid not Marko. I looked at HLAB27 by latitude but not insulin signalling. Anyone on a near ketogenic diet should access central calories. Perhaps more a question of who tolerated a diet of crap with slowest onset of harm.......

I've believed for a long time that visceral fat (VF) build up is an adaptive response, because it is very easy to mobilize (burn). For example, stress stimulates VF growth, in preparation for release - fight or flight. VF growth is our friend, as long as we do things to burn it - like intense exercise now and then, and hypo-caloric days.

Cave, you have to read the methods, as far as I can make out the "fed" dutchmen had their evening meal "whereas in the second condition [fed], subjects were fed in energy balance (50–35–15% of energy as carbohydrates, fat, and protein, respectively) but then "During the intervention [starvation], blood samples were taken after 12, 36, and 60 h [should be a coma here] after an OVERNIGHT FAST in case of the FED condition".

The open circles are fed dutchmen who have not eaten overnight. Outside the study this would be called a fasting sample, it's not called that here as the other part of the study had that 60 hour fast. That's why the first time point is at 12 hours, its the morning after the night before....

Ned, yes. Just so long as insulin drops below whatever that pg/ml value translates to in clinical terms. Then it pours out, and I think it suppresses appetite too, probably acting at the liver. But the studies are very, very contradictory and some of them are either clearly bent or come from a lab which I have issues with in general.

"During the intervention [starvation], blood samples were taken after 12, 36, and 60 h [should be a coma here] after an OVERNIGHT FAST in case of the FED condition".

Wow, Dutchmen are such snowflakes — going into a coma after a simple overnight fast.