I'm going to use some of Konrad's data to try and understand Kahn's data and the see if it will extrapolate to growth hormone receptor knockout (GHrKO) adipoctes. That's the plan. Time will tell... I'm going to use the term eWAT for epididymal adipose tissue.

There are three curves here from Konrad. 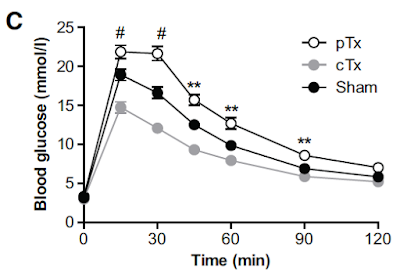 The open circles are mice with extra eWAT carefully added to a mesenteric (liver draining) site only. The eWAT is inflamed, leaking IL-6 and this goes directly to the liver. This IL-6 is causing hepatic insulin resistance with glucose intolerance, as per the last post. There is no elevation of portal FFAs after a three hour fast (not surprising when you recall that you need seriously low insulin levels to access visceral fat, three hours won't hack it). So we can ignore the open circles.

The black circles are the controls.

The grey circles are mice with eWAT (this is normal eWAT from normal sacrificed Bl/6 mice) added to the peritoneum with all of its venous drainage going to the systemic circulation. This too is leaking IL-6 but by the time it's diluted throughout the whole systemic circulation it causes no insulin resistance. Result: adding eWAT without hitting the liver with IL-6 simply provides extra adipocytes, they accept glucose, glucose tolerance test results improve. This is a generic effect of adding extra adipose tissue, it doesn't seem to matter what the source of adipose tissue is or where you put it, so long as it isn't trickling IL-6 in to the liver, any extra fat improves glucose tolerance. Think thiazolidines, more new fat cells, they're empty, glucose tolerance improves as the cells fill up.

Here is a graph from Kahn; the effect of extra fat, when it isn't dumping IL-6 directly to the liver, is always to improve insulin sensitivity, even adding eWAT to mesentery, here called VIS-VIS: 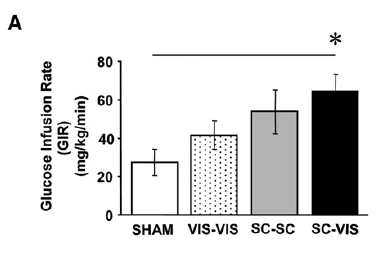 Clearly only subcuticular fat transplanted to the mesenteric site reaches statistical significant (SC-VIS). But you can see the trend...

This is the exact converse of the diabetes of lipodystrophy cases: in lipodydtrophy there is no adipose anywhere, nowhere to put glucose/fatty acids, all stored triglyceride is ectopic, so your end result is severe glucose intolerance.

Now to look at basal lipolysis from Masternak and Bartke's group. This is an in-vitro measurement, performed on aliquots of adipose tissue in Dulbecco’s modified Eagle medium with or without 10% FBS (foetal bovine serum) where they started looking at lipolysis from GHrKO adipocytes, harvested from congenitally Laron dwarf mice. I'm guessing the 10% FBS made no difference because this is the only figure we get in the supplemental data: 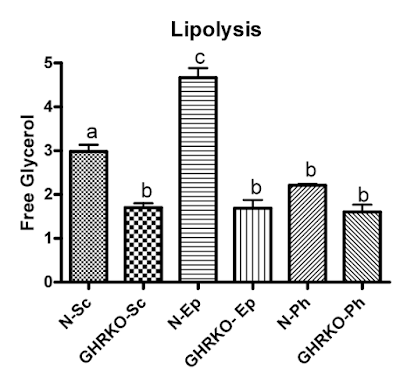 Now, you have to be very careful with this data. Basal lipolysis is not the same as lipolysis under fasting levels of insulin. Basal lipolysis would produce a ketoacidotic fatality because no insulin is obviously the equivalent of severe T1DM and is rapidly fatal without a very expensive trip to A and E (unless you have the NHS). Next we have the problem that this lipolysis measurement is made per gram of tissue, but in the whole animal some tissue depots are bigger than others as a % of bodyweight and all GHrKO mice are obese, so they have much more fat to provide FFAs per unit muscle etc. The approximate total fat mass of a GHrKO dwarf mouse is actually very similar to that of a normal Bl/6 mouse, it's only the fat free mass which is small. So glycerol release per gram of adipose tissue may be lower in the dwarf mice, but total lipolysis might be very similar to Bl/6 mice. Merely adding basal insulin would produce a normal, hungry mouse but we have no idea what the rates of lipolysis would be then and if they might change more in some tissues than others. So a little caution, to say the least, is needed.

With that said I was going to go on to say all sorts of things about lipolysis but at this point the penny dropped, as we say in the UK. I've stopped following the trail and I think I know why GHrKO mice are the longest living mice ever engineered. Perhaps I should put that in to a final post in the series.