Eggs are here (well, one is anyway)

Some semblance of posting on Hyperlipid will probably resume late next week but, in the mean time, Penelope (Squiggs' favourite chicken, the one who lets herself be caught, cuddled and carried around) has laid an egg, our first ever home produced egg. A decent size for a first egg from a young chicken! 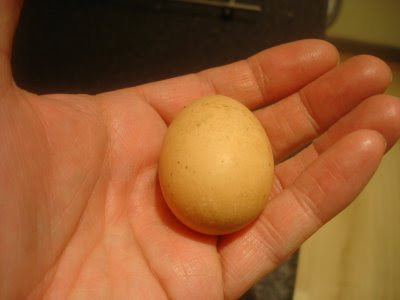 Not only that but it was a double yolker... 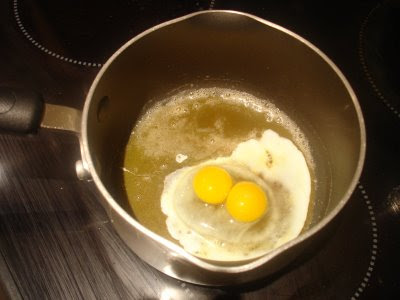 Guess who ate it! 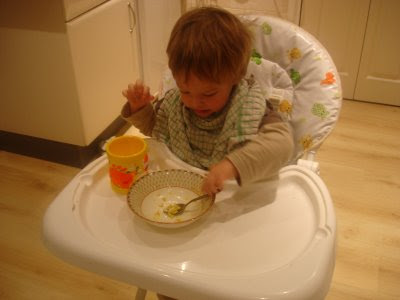 Back when life gets in to more of a normal routine and I can get to answer some of the off blog emails and do some blogging too.

For an absolute, all singing, all dancing excellent review of the JUPITER trial go read Sandy Szwarc over at Junkfood Science.

Don't expect to be done in 2 minutes!

Back in the early 1900s it was patently obvious that pellagra (vitamin B3 deficiency) was a contageous disease.

You have to ask exactly how a disease caused by a vitamin deficiency could remotely have been classed as contagious, and exactly why this idea should have been so vigorously defended by the medical profession. To get the whole story you really need something like Alan Kraut's biography of Goldberger. I found it an interesting read, particularly the lengths Goldberger (and his family) went to in order to demonstrate on themselves that pellagra was not contagious, and quite how his wife put up with coming such a distant second place to his work is quite beyond me. Anyway, it turned out that the "Scourge of the South" could be cured by decent food, eventually replaceable by a teaspoonful of brewers yeast a day.

Just imagine heart disease being cured by a pint of cream a day...

How did the medical profession take this to phenomenal and meticulously tested hypothesis? If you think the AHA hated Dr Atkins, that has nothing of the violence of the reaction against Goldberger. To say they were not best pleased might be a slight understatement. They hated him. The reasons were essentially financial and political, a bit like heart disease today. Being correct does not always make for popularity.


Now let's have a look at subacute myelo-optico-neuropathy (SMON). OK, hands up if you have never heard of SMON.

The disease was pretty well limited to Japan between 1958 and 1972, so you may be excused. Identification of the cause was severely hampered by the obvious explanation that it was contagious and was caused by a gut virus. The fact that it ultimately turned out to be caused by a known neurotoxin marketed by Ciba Geigy as a drug for the treatment of diarrhoea was vigorously denied by the virus hunters, even after what had really happened became fully accepted by the Japanese government.

To get some idea of how much fun SMON was for the victims, over 1000 of them were still alive in 2004 (of the approximately 10,000 affected). These are the types of problem the survivors are still left with.

Here's a nice summary of the whole episode, it makes interesting reading. Duesberg is probably the world's leading AIDS denialist.

For those of us who were stacking straw bales in the university vacation during the blistering summer of 1976, SMON doesn't seem that long ago.

This poses the very interesting question: When did we stop making mistakes?

and the closely related question: Statins in the drinking water?

There was a snippet on Radio 4 about the JUPTER study this morning. It was basically an ad for statins for everyone in the UK. Well, 75% of the adult population.

What the JUPITER study found was that in people with low cholesterol levels but elevated hsCRP levels, taking a statin dropped the overall mortality from low to a bit lower.

Bodycounts were 198/8901 in the statin group and 247/8901 in the placebo group. Clearly treating 8901 people for a year and a half will prevent 49 deaths. According to the lipid hypothesis, all of these lives saved should be as a result of less cardiovascular disease, such as fatal heart attacks. 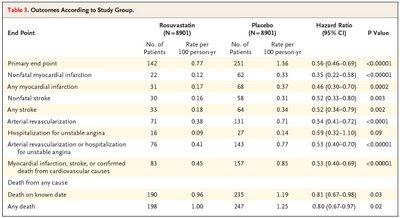 Hmmm, 50% increase of being dead from a heart attack on Crestor, with an LDL half the level of the people on the placebo.......... Good job the study was not powered to detect this!

So what did the people die of in the placebo group? Well, it certainly wasn't heart attacks.

hsCRP is a protein produced by your liver as a message to your neutrophils to get out there and do whatever they should be doing, but more so. It probably does lots of other things too. The list of diseases that come with elevated hsCRP is huge. It looks like taking Crestor does blunt this message. Whether that is why the death rate dropped on the statin is anyone's guess. Statins have lots of effects and, believe it or not, not all are acutely bad!

As an aside: Why were there so many cardiac procedures in the placebo group? Perhaps this is what saved their lives? Unlikely. The explanation could be as simple as statins preventing chest pain, which they do by facilitating nitric oxide's vasodilating action (just Pubmed "statin nitric oxide"). Anyone in the USA with chest pain is very likely to get a "soft end point" procedure, as per the JUPITER study. Less chest pain, less Dr visits, less procedures. Dr Davis explains how Dr visits lead to procedures.

So, in summary, rosuvastatin has a minor effect on all cause mortality and no effect on heart attack deaths in people with elevated hsCRP.

What the news clips claimed was:

"The study [JUPITER] of 17,800 men and women with normal cholesterol levels found a new statin drug cut deaths from heart attacks and strokes"

Note the words "deaths", "heart attacks" and "strokes". There were 3 stroke deaths in the statin group, 6 in the placebo group. Exactly enough to reverse the heart attack effect. Phew!

I missed this snippet initially as I was off making tea and came back to find my wife grinding her teeth. Not so much at statinating the nation, we're pretty resigned to this. No, the problem was the deferential supplication of Sarah Montague (normally an infuriatingly aggressive interviewer) to the medic and statination. She would have torn a politician apart for such economy with the truth.

Thanks to the THINCS members for the full text and kicking these ideas around so thoroughly.
Posted by Peter at Monday, November 10, 2008 9 comments:

Well, there have been a few interesting developments in the last few days. The most interesting was being invited to lunch by Prof Ebringer. That was a very long conversation and has produced a stack of papers to read and a whole lot of ideas, plus a Drs appointment for myself to see if I can get HLA-B27 tested on the NHS. At £209 per test privately, I'm rather hoping to get my GP to fund this even if I have to offer a decent bottle of wine to cover the £20 odd it costs the practice!

The HLA-B27 discussion was very interesting. Apparently the allele is very common among the Eskimo and their descendants and very rare in people from equatorial regions. This fits nicely with the carnivorous HG in temperate or extreme climates vs more starch based gathering in the tropics. By a quirk of migration the gene is also very rare in Japan, but even there the link with ankylosing spondylitis is strong.

A medic, Dr Tani, working in Japan, was looking to publish a paper on AS and approached the Kings College group to get the Klebsiella antibody titres done. Prof Ebringer suggested sending the samples coded, plus some controls and some RA samples thrown in. This is the paper which came out of the collaboration.

The Kings College group did the same with a set of coded Dutch samples, written up here. Interestingly, two other labs failed to get the same result, using the same samples. But if Ebringer can get consistent results on both the Japanes and Dutch samples, I tend to think his group is quite good at immunology.

Obviously the AS hypothesis generates the starch avoidance protocol which seems to be in fairly widespread use in places like the KickAS site. The proof of the pudding is in the eating ie, do patients get better on a behaviour based on a hypothesis. If so that seems to support the hypothesis to me...

I think it is worth noting that AS primarily involves an IgA antibody, which suggests exposure to the trigger across a mucosal surface, typically the gut. Rheumatoid disease involves an IgG response and suggests a non surface immune response, in this case classically through a low grade chronic urinary infection. This gives a simple explanation for the response seen to minocycline and doxycycline in RA patients. Of course without antibiotics (or with them) you might approach starving the proteus which triggers RA by using a dilute urine approach (the proteus bug derives energy by splitting urea in the urinary tract) and possibly eating a low protein diet might well help too. It's worth noting that the true Optimal Diet is actually rather low in protein at around 40-50g/d, once you are well established on the diet. By eating the minimum amount necessary of the highest quality protein you produce the least quantity of waste, ie urea, which is better known as proteus fodder. I'm not down at this level of protein intake but it's another option for fighting RA. I guess getting your immune system back by dumping sugar would potentially get rid of the proteus bugs completely... There's an interesting study.

Of course we spent a lot of time talking about BSE, scrapie, CJD, vCJD and MS. There is probably a book could be written here so I'll stop until I think I understand it a bit better and have had chance to tease out a few of the more problematic features of both the prion hypothesis and the auto immune hypothesis...