Who gave you pancreatitis?

Background: Propofol is a mainstay anaesthetic induction agent. Its use is associated with occasional pancreatitis episodes. I won't wander aside about the poor dog which was referred for cataract surgery and which did eventually recovered from its perioperative fulminating pancreatitis.

Me, being me, would automatically blame the PUFA in the Intralipid. But then I would.

I came across this paper by accident this morning:

It's good. The group even give you the glucose concentration used in their cell culture, 0.2%, ie 200mg/dl or around 10mmol/l. Not normal but hardly seriously pathological.

Aside: Less innocent groups keep quiet about glucose concentration and can reliably show endoplasmic reticulum stress and any other nasty attributable to palmitic acid. With how much glucose??? End aside.

This is what they found:

So. If you have a genetic hypertriglyceridaemia, say lipoprotein lipase deficiency, and you get acute necrotising pancreatitis (not fun) there is every possibility that it was induced by the high content of polyunsaturated fatty acids in those triglycerides and the FFAs derived from them.

Which means that your cardiologist put you in the ITU. Avoid saturated fats, replace them with polyunsaturated oils. Thank you Public Health England and your equivalents world wide.

The converse might well be that loss of the gene for lipoprotein lipase, or similar loss, might not have been a big deal when humans lived by eating elephants. Or even until corn oil took off as a cholesterol lowering scam.

Labels: Who gave you pancreatitis?

Dave Speijer has a great video up on YouTube based largely around his recent paper in BioEssays.

It's nice to hear the man himself on a subject about which he has spent a great deal of time thinking. Here it is:

Many thanks to Andrew Moore, editor-in-chief at BioEssays and publisher of many of Dr Speijer's papers, for the heads up that this video had been produced.

Dave Speijer, an extremely insightful person if ever there was one, has a new paper out:

the link to which I am extremely grateful to Bob for forwarding to me. This concept is purely from Dr Speijer. But I like it. A lot.

I'll start with an old doodle I produced about a decade ago depicting the front end of the electron transport chain. Matrix is at the top, cytoplasm at the bottom: 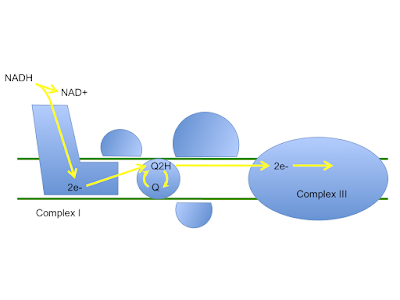 Electrons travel from NADH to Coenzyme Q, reducing it to QH2 which donates them to complex III being oxidised back to Q in the process.

The unlabelled blobs in the diagram are complex II (succinate dehydrogenase), electron transporting flavoprotein dehydrogenase and mitochondrial glycerophosphate dehydrogenase, all of which compete with complex I for CoQ as an electron acceptor. Given a high membrane voltage, a deeply reduced CoQ couple with most of the CoQ as QH2, then reverse electron transport back through complex I gives superoxide/H2O2 generation (provided the mitochondrial NAD pool is also highly reduced so unable to accept electrons (ie little NAD+, lots of NADH).

This is pretty straight forward and is the gist of the Protons thread. The extension of this is that, under high substrate availability, H2O2 from this process stops insulin facilitated caloric ingress to the cell.

Another major site of ROS generation in the ETC is complex III. Dave Speijer would hold that this is also triggered, like RET, by a deeply reduced CoQ couple. This is why.

So here is a stripped out version of the above doodle: 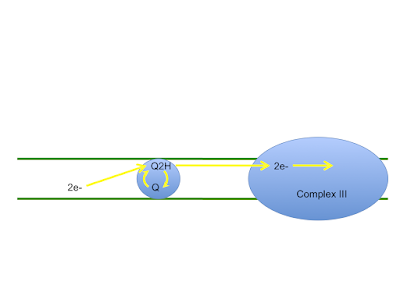 The problem here is that it's not that simple. Complex III does rather odd things with its two electrons. Electron bifurcation is a standard enzymic technique perfected very early on by proto-biology and it is exactly what happens here. One electron travels to cytochrome C (which only ever carries one electron at a time) and then on to complex IV and O2. The other does not: 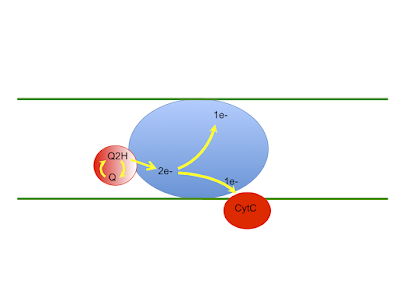 The second electron is transferred backwards to another  CoQ molecule and so partially reduces it to QH*, the radical semiquinone. 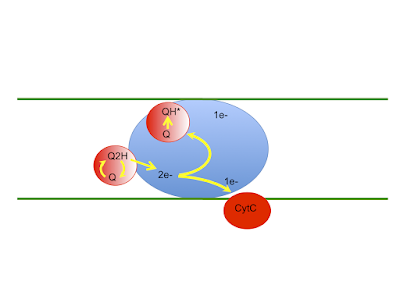 So (oxidised) Q is a necessary electron acceptor for complex III. Under high substrate availability and with most of the CoQ couple present as QH2 there will be very little Q available.

With one electron securely on cytochrome C, with any delay in the availability of Q, the second electron can be left sitting on one of the two haem groups along its route, easily available for donation to O2 to give superoxide, so adding its ROS signal to that of complex I. Both indicate that enough substrate is present and it is time to limit insulin signalling, to limit caloric ingress.

Nothing, absolutely nothing, about the construction of the ETC is random.

The general principle that a highly reduced CoQ couple is a signal to halt caloric ingress in to the cell applies to complex III just as much as to complex I.

If you fail to limit caloric ingress then eventually ROS from complex III are ideally placed to break the cardiolipins which anchor the water soluble cytochrome C to the inner mitochondrial membrane. Destroy these anchors and the ROS signal changes from"resist insulin" (good) to "perform apoptosis" (possibly not quite so good)...

And of course ROS in excess of physiological signalling are going to activate all sorts of inflammatory pathways.

Aside: The process of ROS generation is probably limited by pairing of complex IIIs (complex III is always a dimer in-vivo) for cooperation to use one Q to accept an electron from each of the pair. This should limit ROS generation as one Q will be available to two complex IIIs, twice that avaiable if they were each working alone. Nothing is random. End aside. 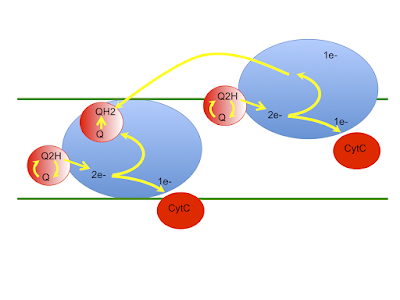