Have we found alien life? This interview did the rounds via Facebook recently. There is only one answer.

We have found bacteria that can run their electron transport chain using an electrical connection to an external electron acceptor. In more ordinary bacteria electrons travel down the ETC to complex IV where, under oxidative metabolism conditions, they are passed to oxygen as the terminal acceptor, still within the cell.

Bacteria are the most sophisticated metabolists on Earth. To stick a series of cytochromes together to form a wire, from the end of an electron transport chain to an extracellular acceptor of electrons, is no big deal. Once a bacterium is using such a wire (which will, undoubtedly, be using quantum tunnelling effects much as the FeS clusters of complex I do) to access extra cellular terminal acceptors it is absolutely no problem to make that terminal acceptor anything with an appropriate redox potential.

Under these conditions a cathode electrode will allow the metabolism of NADH from the cytosol, via complex I and the CoQ couple down the ETC and out along the cytochrome wire. A cathode electrode, whatever it is made of, is an electron acceptor. That's the definition.

So growing bugs on a cathode is utterly unremarkable. NADH comes from "food". Electrons from NADH drive the ETC to make ATP and are dumped out-of-cell on to the cathode.

Where things get slightly interesting is that you can also apply a negative voltage to the end of the wire, making it an anode, a net supplier of electrons. Certain types of bacteria can function under these conditions without any carbon input. From the article:

“A lot of organisms that can put electrons onto an electrode can also do the opposite and take electrons from one”—though not at the same time—Rowe says. That ability to reverse course surprises me, and Rowe, too. “I’d think it would be really hard on the organisms. You’re basically stealing energy from them. But they do okay.”

This is incorrect, it lacks perception.

It is perfectly possible to run the ETC in reverse. Bacteria do this on occasions, for reasons best known to themselves, especially if their normal metabolic substrates cannot generate NADH directly. Usually ATP is used to drive ATP synthase in reverse to maintain the membrane potential. Electrons flow in reverse to reduce NAD+ to NADH which can then be used for anabolism. All that Shewanella spp need to do is to use the negative voltage of an external electrode to facilitate reverse electron flow and they can be generating NADH for anabolism without any carbon source. About a third of a volt does the trick, from the interview.

Whether this process would allow the fixation of atmospheric carbon dioxide to actually allow growth is irrelevant. What matters is that there is absolutely nothing about these bacteria living on "pure electricity" which suggests anything other than a clever piece of wiring added on to the end of a  fairly normal ETC.

This is what Shewanella oneidensis looks like with its complex I and CoQ couple: 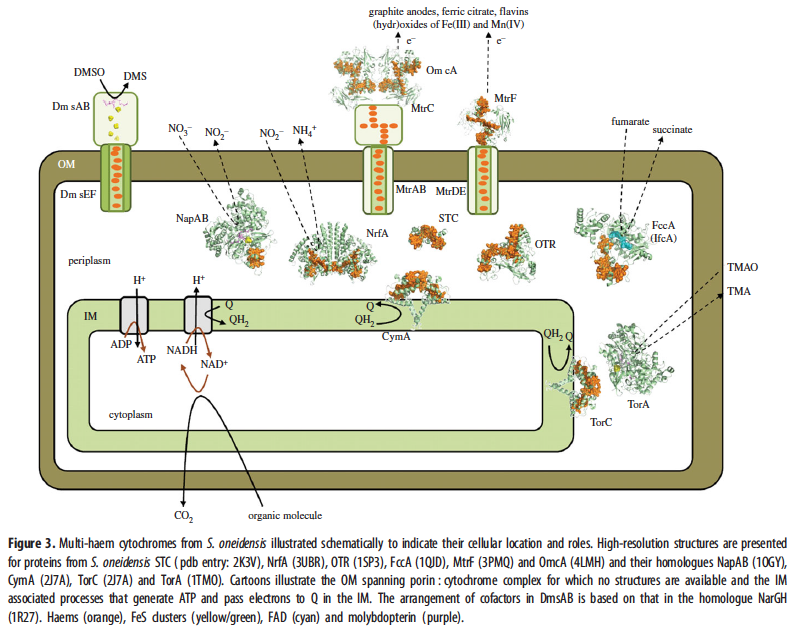 A clever bacterium? Yes, with very busy periplasm. But anyone who thinks that any bacteria are simple is stupid. What if you think that these particular ones are alien life forms?

"Kenneth Nealson is looking awfully sane for a man who’s basically just told me that he has a colony of aliens incubating in his laboratory".

It is only an alien life form if aliens developed the same electron transport chain as any Earthly organism which uses oxidative phosphorylation to chemical acceptors.

How much does Nealson know?

I mentioned the high protein/exogenous ketone approach to Glycogen Storage Disease IIIa in a recent post. It's very nice that an effective treatment can actually be achieved through a Modified Atkins Diet (MAD at <10g of carbs per day) involving food, w/o faking ketosis though those exogenous synthetic ketones.

Robert gave me the heads up on the latest paper on GSD IIIa using MAD, available as a free text through Pubmed. It's rather good as, again, it shows that there are medics out there who think matters through and occasionally come to correct conclusions. I love the clinical details of compliance/non compliance too. And that the early hypoglycaemia, treated with corn starch (bleugh), was asymptomatic under ketosis.

He also sent me the full text of Veech's

which is a fascinating personal insight in to what it was like to work in Hans Krebs' lab, combined with the sort of hard core math which implies rather more understanding of biochemistry than simply adding MitoSOX red to some cells and looking for colour changes to show oxidative stress. That's some complex reading to work through when clinical and home life combine to give me a chance!

I've been gifted a paper of great interest. The authors of the paper are very good in their explicit discussions of the limitations of their models, the reasons for the choices they made and the limitations of all current models and probes. This is good and, needless to say, there are an awful lot of "ifs, buts and maybes" to the data! On the down side the paper is an epub of the crudest type, retaining numbered lines, the figures at the very end of the whole paper and all of the captions in a lump between the references and the figures. So not easy reading for a very complex paper, with very complex figures and very complex captions. I spent a large amount of time on this paper over the Christmas vacation but never hit post on any of it. Here is an introduction.

Over the years we have seen, largely via Veech, the ability of ketone bodies alone to rescue myocardial function to give mechanical work performance comparable to the combination of insulin with a relatively normal level of glucose in the perfusion of isolated rat hearts. Equally there is the concept that ketones essentially bypass insulin resistance to rescue metabolism.

The hearts in Veech's study were perfused with oxygenated buffer which was devoid of the free fatty acids which are a normal metabolic substrate for heart muscle.

As a lipophile I have long wondered whether, outside of the neurons, palmitic acid might be a reasonable substitute for ketones in rescuing muscle metabolism damaged by hyperglycaemia.

From the start of the discussion section of Bhatt's paper:

"We investigated the role of substrate-driven redox status on the contractile/energetic performance of heart trabeculae from the T2DM ZDF rat. The main findings are: i) HG exerts a detrimental action on contractility of T2DM heart trabeculae that Palm is able to rescue; ii) Palm prevents oxidative stress exacerbated by HG, an effect independent from insulin action; iii) insulin appears to worsen the negative effect of HG through higher oxidative stress and lower GSH; iv) ZDF heart mitochondria emit less ROS and display higher ROS scavenging capacity of the GSH/Trx antioxidant systems; v) cardiac redox balance in HG appears to play a causal rather than correlative role in the preservation of contractile performance in ZDF trabeculae"

This was the core finding in the paper. There are a whole slew of spin off concepts which grow from it but if I wait until I have them all sorted out it might be a very long time before I get another post out!

But here we have it. Hyperglycaemia is bad. Palmitic acid rescues hyperglycaemia induced dysfunction. A paradigm shift in glucose vs FFAs!