NASH on a ketogenic diet

Just a brief post on the development of NASH in long term ketogenic fed mice because I've been side tracked by some other papers: Starvation (Ethan), metformin (tripped over this one myself, things are moving forward from PSS and Oxygen), UCPs and fat oxidation (kindke)...

NASH, it all comes down to this paper (thanks Liz).

Does sustained ketosis produce NASH? Well yes, or at least something like it. Just look at the picture: 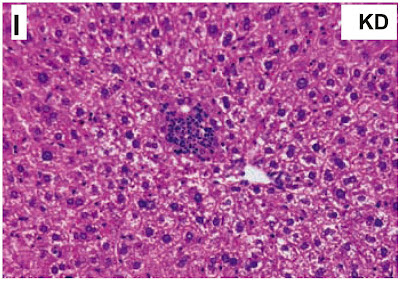 The dark staining patch is made up of neutrophils. You don't want clumps of them aggregating in your liver.

That's what you get if you feed F3666 to C57BL/6 mice. It is, undoubtedly, intensely ketogenic. But is it anything else?

Do PUFA matter for the development of NASH? Probably. From this N and M paper:


"The lipid composition of the different diets which induce steatohepatitis (see Table 4) [19,20,51,52,54], were lard and corn oil, both oils rich in unsaturated fatty acids. We can observe that fat of all the diets inducing steatosis and inflammation (Table 4) were richer in MUFA and PUFA (>30% and >20% of total fat respectively) as compared to our diet (5% and 2%). The injurious effect of unsaturated fatty acids, and particularly n-6 polyunsaturated fatty acids, was associated with enhanced lipid peroxidation and decreased concentrations of antioxidant enzymes, implicating oxidative stress as a causal factor. Indeed, different studies showed the pro-inflammatory effect of polyunsaturated n-6 fatty acids which exacerbate liver oxidative stress [60,61] and promote the development of NASH."


So there is a message: If you are going to eat a very high fat diet in the long term, you should pay serious attention to PUFA creep. Having cirrhosis is not likely to help you make old bones in good shape. Perhaps go easy on the commercial mayonnaise and just spread some butter on your cheese... Actually I tend to add butter to my beef if it's too lean (only happens when eating out, no way we would choose lean beef to cook at home!)...

It makes me wonder about saturophobes who might be swilling PUFA to lower their LDL and triglycerides, with or without a LC diet... More potential victims of the cholesterol hypothesis I suppose.

Labels: NASH on a ketogenic diet

Question: How do you convert a C57BL/6 mouse in to a FIRKO mouse?


First, break your mouse. Both the grey squares and white triangles represent C57BL/6 mice on good old "high fat" D12451, so beloved of obesity researchers. They get a broken brain and gain weight. You can also feed chow CIAB to get the black diamonds: 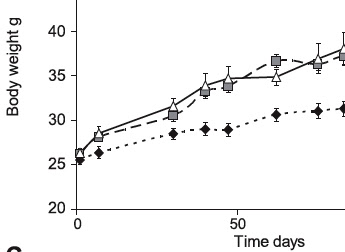 Now let's do a little magic and render all of the adipocytes of the white triangle D12451 injured mice insulin resistant, in both brown and white adipose tissue. This is slightly tricky. Are you all standing in a circle holding hands? On a hill top in mid winter? OK, say the magic words while turning withershins. You have to chant:

Calories-in, calories out, turn this stupid mouse about! FIRKO-ISE... 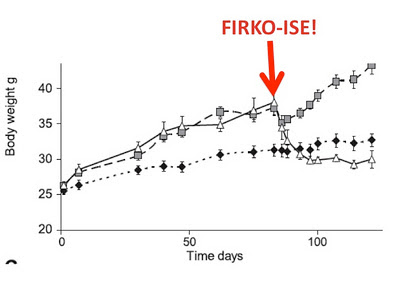 OK, well done, you can all put your clothes back on now and stop dreaming of UCP-1. 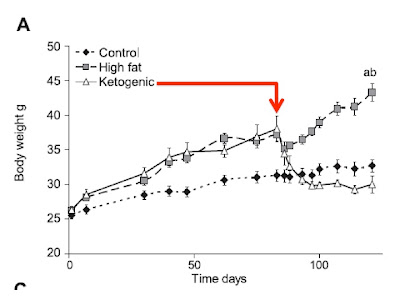 with the classic use of ketosis to normalise the bodyweight of D12451 injured mice. Ketosis renders adipocytes insulin resistant, just like those of FIRKO mice. Of course, because ketogenic dieted C57BL/6 mice are functionally FIRKO, they don't cut calories. They eat as many calories as the D12451 injured mice. But they produce more heat:

[*Brownie point for spotting the typo in the quote. Hot mice indeed!]

They also avoid the gym. Heard that before?

We know that simply not eating for a while induces whole body physiological insulin resistance. We also know we can do exactly the same thing, without all the pesky death involved in sustained not-eating, by simply going in to deep ketosis without cutting calories.

Ketogenic dieting is slightly controversial. I've heard it said that the weight loss in these ketogenic fed mice is not real weight loss. I've even heard the change described as organ shrinkage. Interesting. The ketogenic mice become relatively hypoinsulinaemic and glycogen depleted. Do these affect lean bodyweight directly?

I had the full text of this paper sent to me by a friend and it has a nice summary of the effects of carbohydrate restriction on fluid balance (excuse the rather condescending tone, it's written by a leading obesity researcher):

"...energy is stored in the body as protein, fat, and glycogen, which is a form of carbohydrate. Any imbalance between the intake and use of these macronutrients will lead to an alteration of body composition since the stored protein, fat, or glycogen must change to compensate the imbalance. The energy stored per unit mass of carbohydrate, fat, and protein varies considerably, especially when accounting for the intracellular water associated with stored glycogen and protein.7 Furthermore, dietary carbohydrates have an effect on renal sodium excretion via insulin,60 which results in concomitant changes of extracellular fluid."


As far as I can make out losing liver glycogen, muscle glycogen, excess sodium and, in particular, the water associated with these body components shows up as lean body mass loss on a DEXA scan. Reducing your insulin-induced sodium retention may be good or bad depending on many factors (such as your starting blood pressure!), but it will show as a non adipose tissue body deficit in Fig 2, graph B, second column. There might even be a little muscle reduction, I can't say...

We know from the DEXA scans in Table 5 that ketogenic dieted, post-obese mice had a significant deficit (by mouse standards) of fat compared to the D12451 injured mice and most of it showed up in the whole body scans rather than the hind limb scans. This would suggest to me that they lost central, probably visceral, fat. I think we all pretty well agree that visceral fat is Bad Fat (maybe). It's usually the first to go on ketogenic dieting in humans. I don't see fluid loss or visceral fat loss as big worries.

There seem to be a whole stack of benefits to sticking D12451 injured mice on to an extreme ketogenic diet.

What about these ketogenic fed, pseudo-FIRKO mice? Alas the sad story of their premature demise will have to be left for the next post...

As we all know, there is a spate of new books out at the moment. I see that Dr Briffa is on Jimmy Moore's LLVDLC.

John sent me a copy of Escape the Diet Trap and it almost immediately disappeared to my wife's mother, to be returned disappointingly rapidly a week later. She has, happily, bought her own copy. No one where she works believes a word of it. I like it.

Not had chance to read Richard's primer or Chris's Hillfit but I know neither need any help from me and I'm looking forward getting a chance to read both as I get a little more time...

Anyone who has moved from Scotland to East Anglia will know how envious you feel browsing http://cairn-in-the-mist.blogspot.com/.