Polyprenyl derivatives at the origin of life

I just wanted to put something down about the possible early membranes used by LUCA. There is a good case to be made for leaky membranes (certainly to protons) composed of polyprenyl phosphates. Here's the logic:

Start with the modern mevalonate pathway, from wiki. 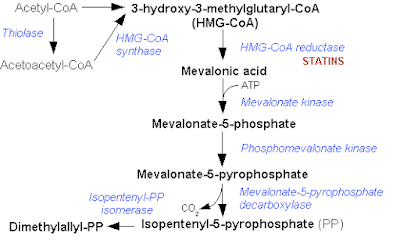 Now, let's butcher it down to its utter basics: 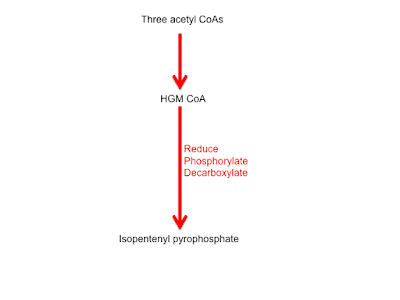 Isopentenyl pyrophosphate is the central cornerstone of polyprenyl phosphate generation by this reaction: 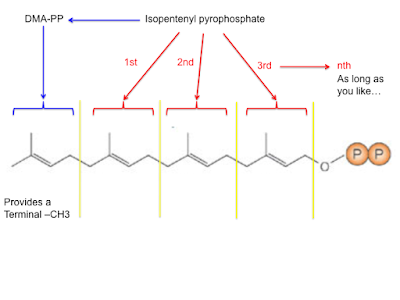 You can make the polyprenyl phosphate lipid as long as you like, just add more isopentenyl derived units. This gives us the entry point, top centre, for this diagram: 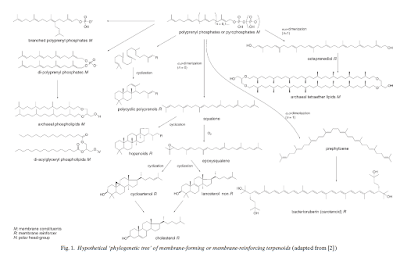 Down the left hand side we have the simple pathway to the archeal plasma membranes, as you might expect. Down the centre is the route to cholesterol, essential to animal cell membranes. The hopanoids, essential to bacteria but absent from archea, are left of centre.

Archea stayed with polyprenyls for their membrane, bacteria went for the fatty acids while retaining polyprenyl derived components. Derivatives of polyprenyls are ubiquitous. Metabolic cornerstones common to both archea and bacteria may well have been present in LUCA. Seems a reasonable argument to me.

There are a set of core enzymes present in both archea and bacteria which appear to have evolved before their divergence from LUCA. Perhaps the most significant is the rotator/stator ATP synthase, a piece of molecular nanotechnology of breathtaking complexity, considering that it appears to have evolved as one of the core early molecular machines of life. It's association with membranes suggest that membranes were there quite early on in evolution.

The presence of membranes allows us to think about some interesting questions. Such as why are cells powered by ATP? Because that is what ATP synthase produces. There is nothing intrinsically special about ATP. Reduced ferredoxin is a common power source in bacteria and archaea. Acetyl phosphate can be used too. But ATP is what is made by the ATP synthase machine and it can be produced in bulk, given a membrane potential. The hows and whys are interesting.

Labels: Life (02) Polyprenyl derivatives at the origin of life

The Wall is coming down

Well, I guess it's going to become officially OK (as if I could care less) for me to fry my egg yolks in salted butter and add a little extra salt at serving time. And to skip any sugar in my tea. At the risk of glucose deficiency I suppose but, what the hell, live dangerously...

Malcolm Kendrick and Steve Cooksey have two nice accounts (amongst many) out there so there's not much for me to add. It just reminds me of listening to the news as the Berlin Wall came down, even if it's not headlining at the BBC yet. Amazing. Happy.

You still have to feel sorry for the people so badly injured by the consequences of the lipid hypothesis but at least the possibility of using real food to produce normoglycaemia is no longer specifically decried by official dietary advice. The floodgates are open. The information is out there.

BTW, the Japanese appear to be about to start the destruction of statination too, certainly for the elderly... Thanks to Liz for the full text link.
Posted by Peter at Wednesday, May 20, 2015 4 comments:

Labels: The Wall is coming down

Jack Kruse sent me this link:

For those working through Nick Lanes latest book will realise (if you hadn't already!) that there is an energetic cost to everything. The ability to change shape at will, with a view to phagocytosis, is both an essential to the development of the eukaryotes and is energetically very costly.

In the absence of mitochondria the only place this appears to have been discovered is the deep sea alkaline hydrothermal vents, in this case at Loki's Castle. This is the environment where geothermal sources generate the electrochemical disequilibrium which probably got life started using the "free lunch" of CO2/CO plus R-SH giving acetyl-S-R, gateway to metabolism. It is still an energy rich environment.

The alpha proteobacterial precursor of our mitochondria had to get inside the archaeal host. This is an interesting discovery relating to how that might have happened. The phenomenon of archea performing ingestion may well have remained confined to the vents if it was too energetically costly in the open ocean. Unless that archaea was carrying little mitochondrial powerhouses, in which case it was pretty well already eukaryotic. Far from equilibrium environments make for interesting developments.

Looks like you can develop eating only if you already have a free lunch!

This paediatric ketogenic diet is a child of its time, steeped in the benefits of massive PUFA ingestion and often combined with phenobarbitone. The child in the case study above could barely swallow as a result of the high dose of phenobarbitone she was taking. If you were to suggest hepatopathy, dyslipdaemia and potentially fatal pancreatitis as sequelae of the diet, I would not be surprised.

Please do not feed this to your child, we are no longer in the 1970s.

On the other hand, if you order a steak in a restaurant and it comes to you with salad and chips on the side, you do not HAVE to eat the chips to stop yourself developing fulminating pancreatitis.

If you are post-obese, via low carb eating, there is every likelihood that repeatedly consuming the chips (to avoid the pancreatitis, don’tchano) will cure you of the post-ness of your obesity. Enjoy the chips by all means.