Chowdhury and Crabtree play with mitochondria

I still have a stack of comments needing a reply and a number of emails outstanding. Some awaaaaaay outstanding. Mea culpa, that's life. But this post has being lying around for so long that if I wait until all is tidy before I hit post it may never get posted at all, so here it is...

I have been reading a great number of Chowdhury's publications on diabetic neuropathy recently. I rather like his ideas and, although he limits his thinking to the NAD+/NADH ratio, his line of thought fits very well with the Protons thread and the FADH2/NADH ratio concept, which obviously influences NAD+/NADH. There is quite a lot of overlap and repetition within the recent papers as primary publications tend to blend with reviews. But a picture emerges about chronic hyperglycaemia and, very interestingly, of the problems from pathological relative or absolute hypoinsulinaemia.

In this paper [Aside: Note the association of DECREASED superoxide production with diabetes in the abstract, I rather like superoxide!] he mentions the Crabtree Effect. This is the fully reversible switch from a mixture of glycolysis and oxidative phosphorylation to almost pure glycolysis, classically seen in yeasts for alcohol production, when glucose supply is copious. Of course yeasts are fully able to dump their mitochondria completely, given enough sugar. A bit like certain types of cancer cells. Any cancer or yeast cell without mitochondria is utterly dependent on glycolysis for ATP production. These are the cancers which might well respond reliably to a ketogenic diet.

This is rather important as it explains why some cancer cells, which retain mitochondria but which show the Warburg effect in DMEM at 25mmol of glucose, might simply revert to oxidative phosphorylation on glucose restriction assuming FFAs or ketones are available. A nice Warburg/Crabtree paper is here and, while I've only had time to skim read it, it looks good. But I digress, back to Chowdhury:

He is primarily looking at neural failure in diabetes, from the bioenergetic and mitochondrial point of view. SIRT1, AMP kinase and good old PGC-1alpha are his areas of interest. This is from that first link:

"However, in the longer term, the high intracellular glucose concentration provides an ample supply of ATP via several nonmitochondrial-dependent pathways. Consequently, the metabolic phenotype of the cell adapts and functions in the absence of a dependence on the tricarboxylic acid cycle and oxidative phosphorylation for ATP production, possibly by initiating a process homologous to the “Crabtree effect” (35). Thus, rates of electron donation to the respiratory chain are suboptimal in neurons in long-term diabetic rats and may predispose to lower rates of mitochondrial respiratory chain activity and oxidative phosphorylation. Key metabolic activity sensors and/or regulators such as AMPK and NRF-1 are putative candidates for this modulation..."

"...our preliminary data demonstrated a significant reduction in activity of AMP kinase, a regulator of PGC1-α, in DRG [Dorsal Root Ganglia, cell bodies of sensory neurons] in type 1 diabetic rodents (manuscript in preparation)."


There is a nice summary of the metabolic sensors likely to be involved in his paper here. SIRT1 senses the NAD+/NADH ratio. Hyperglycaemia, in excess of insulin supply, depletes NAD+, increases NADH and, as a result, SIRT1 says to PGC-1alpha "Hey, no need for mitochonrdia, shut down mitochondrial biogenesis". Let's not forget nicotinic acid, NAD+, Hoffer and cancer. You could argue that nicotinic acid, by increasing NAD+, is an indirect activator of SIRT1... Of course SIRT1 controls a whole barrel of genes of great importance to health. I think FOXO has had many honourable mentions in comments by George. Also, no one should read SIRT1 without thinking of Cynthia Kenyon and her nematodes.

Chowdhury continues with AMP kinase, which can be viewed as a sensor looking at the ATP status of a cell, much as SIRT1 looks at the NADH status. If glycolysis is in overdrive there will be depleted AMP (also ADP and inorganic phosphate) as ADP gets converted by substrate level phosphorylation to ATP and needs replacing. The complexities of AMP, inorganic phosphate, ADP and ATP seem to be addresses in the Crabtree effect paper. If anyone wants to go there before me, feel free. But the simplistic picture is that excess ATP will act in a similar manner to excess NADH and both sensors interact with PGC-1alpha to say goodbye to mitochondrial biogenesis.

Dumping your mitochondria seems to be fine so long as you have continuous access to hyperglycaemic levels of glucose and can run on glycolysis. OK, I'll rephrase that: Dumping your mitochondria is an utter total complete disaster which is survivable, at a cost, so long as glucose is available in excess. Hyperglycaemia makes you hyperglycaemia dependent. If you really are running your nerve cells (and the rest of your body) on hyperglycaemia facilitated glycolysis then there appear to be a few follow on speculations available:

You get hungry if you lose your hyperglycaemia. I can remember being desperately hungry, in pre LC days, and being disappointed to see a blood glucose of 4.7mmol/l on the hand held glucometer at work. Hardly a low enough level to explain the driving hunger which I used to feel so commonly in those days...

Acute normalisation of glucose levels is going to make you feel utterly CRAP. This takes me back to the concept of "Atkins Flu" and J Stanton's musing as to its origin. The Crabtree effect is whole body, not limited to neurons. A dependence on hyperglycaemic glycolysis makes sudden onset normoglycaemia quite a shock. It's correctable, more rapidly in some people than others.

Then there is the phenomenon of initial worsening of retinopathy with acute onset normoglycaemia for diabetics. This has been noted in a couple of trials (link stolen from Jenny Ruhl). It's particularly worrying because it shows up in conventional "intensive therapy" for diabetes control, which is actually pretty poor in terms normalising blood glucose levels. So the risks are quite low compared to something like Bernstein's target of 4 or 5 mmol/l for blood glucose, 24-7, using an adequate protein, high fat, mildly ketogenic LC diet. For diabetes treatment you need something like this level of control for long term health. In the short term you seem to have to pay some sort of price to get yourself out of the hyperglycaemic corner you are stuck in. It looks like the Crabtree-like effect to me. Of course these short term problems pale compared to the long term benefits of normoglycaemia. But they are there.

Interestingly insulin, even without normoglycaemia, has some ameliorating effect on mitochondrial dysfunction in Chowdhury's lab models of diabetes. We might need to go back to Veech's early work on ketones vs glucose/insulin to take this further. This brings home nicely that diabetes, with relative or absolute hypoinsulinaemia is significantly worse than the earlier stage of impaired glucose tolerance, where hyperinsulinaemia still predominates.

So Chowdhury's ideas give some nice pointers as to why chronic hyperglycaemia is so bad. In his lab animals he is mostly looking at 22 weeks of streptozotocin diabetes to get the mitochondrial pathology, you can't pick up the changes to p<0.05 at 16 weeks. So we really are looking at long term neural damage in his papers.

Now here's the next trick: Instead of making the usual six burgers, make 12 very thin burgers. Put a decent square of feta cheese in the middle of one burger, cover with a second one, squish the edges to make one double thickness burger, enclosing the feta. Make six double thickness feta-enclosing burgers.

Now. Burn them. AGE the surface... Glycate those amino acids over glowing charcoal. 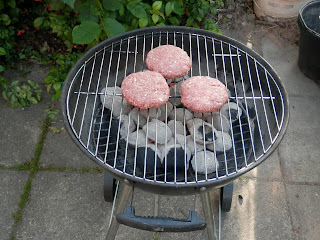 Two is more than enough, for me anyway. I don't care how good they taste, I manage two and have pigged out. I guess polishing off the left over feta during preparation may have something to do with this!

We have a plan to add shredded tarragon or fennel leaves to the next batch. Salt, pepper AND a herb. Livin' dangerously here.

Sorry for no chance to reply to emails or comments. Too busy barbecuing after a heavy weekend on call.