I think people might have noticed over the years that I'm not a great fan of metformin acting clinically by blockade of complex I. Particularly over the last few months I have waded deep through layers of references looking at the morass of "paradoxes" about metformin. In particular that 250micromolar in your plasma will kill you but 4000 micromolar can be justified in cell culture because meformin "accumulates in the mitochondria" at up to 1000 times the level in the blood/cytoplasm, which is a deeply held belief structure on which an unimaginable amount of grant funding hangs. Does metformin cumulate in mitochondria?

It doesn't. I really enjoyed this review from last year. Talk about reinforcement of confirmation bias:

But when you have spent years slogging through papers thinking: That's crap! it comes as a huge relief to find that it's not just you who thinks this, no matter how politely the reaction is phrased.

So. Is metformin research all garbage? No, of course not. Anything involving a live animal on oral doses which do not cause death by lactic acidosis is worth thinking about. Any parallel cell culture research in the same paper using a 4millimolar concentration can be junked. In vivo effects are real, at real dose rates. Cell culture at 1000 times overdose is fiction.

Just to summarise my own speculations:

Under fasting the component of insulin signalling facilitated by the glycerophosphate shuttle can be replaced by saturated fatty acid oxidation via electron transporting flavoprotein dehydrogenase. This maintains insulin signalling at the "cost" of increased fat oxidation. Hence the weight loss.

In the peak absorptive period after a carbohydrate based meal the normal development of insulin-induced insulin resistance is blunted and glucose oxidation continues for longer than without the metformin. If you are eating the absolute crap suggested by any cardiologist or diabetologist this might be of some benefit. If you are already LC the increased fasting fatty acid oxidation is probably where the benefits accrue from.

Cancer benefits are likely to be real, off "target" and secondary to reduced insulin exposure.

Edit: These people seem to be looking at the real world too. Worth spending some time on this

How does cell surface oxygen consumption happen? Here is the main reaction overall (it's probably not that simple!):

A certain amount of hydrogen peroxide is also generated and just a little superoxide (probably for cell-cell signalling). Other electron acceptors can stand in for, or compete with, oxygen as the terminal electron acceptor. The reaction occurs on the outer surface of the plasma membrane. 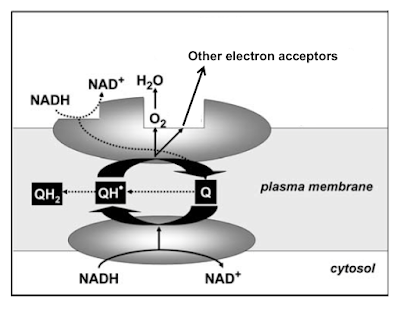 Although I doubt that there is very much NADH or NAD+ in normal extra cellular fluid there has to be an NADH docking site on the outer redox enzyme as one of the hallmarks of cell surface oxygen consumption is that it can be halted completely by flooding the cell culture medium with NADH. Electrons from this then follow the dashed line to fully reduce the ubiquinone to ubiquinol and the system grinds to a halt.


Why is the system there?

Let's go back to the two routes of glycolysis. Without the glycerophosphate shuttle (insulin signalling driven/driving) we have

and there is no depletion of cytoplasmic NAD+ as one is consumed and one produced in the glucose -> lactate process. With insulin signalling we have two parallel processes:

which consumes cytoplasmic NADH, leaving none to convert pyruvate to lactate. So in parallel we have to abort glycolysis at pyruvate:

Now, let's consider a cell undergoing rapid growth with a view to divide. For today I will ignore mitochondrial biosynthesis and consider what happens if cytoplasmic pyruvate is consumed for amino acid biosynthesis. For each molecule of pyruvate which has been diverted to an amino acid there will be one less available to provide cytoplasmic NAD+ by conversion to lactate, which will limit glycolysis because cytoplasmic NAD+ is essential for the oxidation of glyceraldehyde-3-phosphate.

Under these conditions cell surface oxygen consumption appears to be able to step in to oxidise cytoplasmic NADH to cytoplasmic NAD+, which then allows glycolysis and its associated ATP production. This looks to be particularly important if there is any sort of a problem with the ETC and the glycerophosphate shuttle.

Back in the comments thread to the More on insulin and the glycerophosphate shuttle post there has been some discussion as to whether Warburg/Seyfried was/is correct about cancers being glycolysis driven or whether ox-phos is the core processes driving cancer metabolism. Raphi and Altavista have fairly opposite views.

Altavista rather liked this paper, using supra pharmacological concentrations of metformin to block complex I in tissue cultured cancer cells. It is true that this intervention produced a dose dependent decrease in oxygen consumption, but we have no idea of what the absolute oxygen consumption of the cells was, only the relative fall from control cell levels. I have huge problems with this paper. Relative change smells like relative risk, as in cardiology...

So I went looking to find out whether cancer cells do consume oxygen in decent amounts and whether this oxygen is simply metabolised by their mitochondria.

It seems that oxygen metabolism is not the sole prerogative of mitochondria.

This paper is fascinating reading and Table 1 gives us the actual oxygen consumption rates of assorted cancer cell lines in culture.

So there is no doubt that cancer cells in culture do consume oxygen.

Does that imply they are using it for ox-phos? Fascinatingly, the answer is no. Not completely.

What is really interesting is what happens if you generate ρ° derivatives of your cell line. These have no functional ETC at all but still consume significant amounts of oxygen, usually in the order of around 90% of the total amount consumed by the parent cell line. They have obviously adapted to their lack of mitochondrial ETC by hugely up regulating cell surface oxygen consumption.

I'll probably put posts up about these questions as we do have some ideas. But the whole reason I went looking was to decide whether cancer cells perform ox-phos. It seems that at least some of them do. Those which don't (major mutations of complex I genes) tend to be very, very unpleasant in patients. Amongst other cancers it's possible that the degree of dysfunction in ox-phos and its replacement by plasma membrane oxygen consumption may correlate with the degree of malignancy of the cancer.

Nothing is black and white. Many cancers respire to various degrees. Not always very well.

You can't tell from simple oxygen consumption if a cancer cell line is respiring using the mitochondrial ETC or performing plasma membrane oxygen consumption. Your Clark electrode can't tell you. That explains a chunk of why people can't agree on whether cancers use ox-phos or not. All consume oxygen, but some use more ox-phos than others.

I just thought it was interesting.

How primordial is oxidative phosphorylation?

It is perfectly possible to run a sophisticated metabolism using the energy available from an hydrogen rich geochemical proton gradient of the type still found in locations such as Lost City in the Atlantic. This provides an (almost) endless supply of electrons via FeS catalysts of sufficiently negative potential to reduce carbon dioxide to carbon monoxide. From here it is all down hill, energetically speaking, to acetate and metabolism. The process is completely dependent on geochemical conditions for the free-ride. These basic steps are still embedded in the carbon monoxide dehydrogenase/acetyl-CoA synthase complex discussed rather nicely in this 2018 paper (how did I miss it?):

Evolutionary history of carbon monoxide dehydrogenase/acetyl-CoA synthase, one of the oldest enzymatic complexes

Back in the Life series of posts I argued in favour of Koonin's concept that Na+ provided the primary electrochemical gradient which was used to drive a Na+ transporting rotary ATP synthase. It's all in here:

My own idea is that primordial Na+ energetics derived from a geochemical proton gradient which was converted to a Na+ gradient by a H+/Na+ antiporter. In order to detach from the geochemical proton gradient what is needed is a Na+ pump to replace this geochemically driven antiporter. Acetobacterium woodii has the most highly conserved version of such a Na+ coupled system and back in 2009 the Rnf complex was the primary suspect for being the site of Na+ pumping.

The ins and outs of Na+ bioenergetics in Acetobacterium woodii

By 2010 this was pretty well confirmed:

In its most autotrophic guise A woodii can still run its metabolism on molecular hydrogen. The process of electron bifurcation allows the generation of reduced ferredoxin from H2 and so can provide electrons of a potential to use NAD+ as their electron acceptor, with sufficient energy left over to pump a single Na+ ion, in imitation of the H+/Na+ geochemical driven antiporter used soon after the origin of life. This Na+ pumping allowed prokaryotes to leave hydrothermal vents, provided there was access to molecular hydrogen as food.

This core process which freed early life from the ties to geochemical alkaline hydrothermal vents is clearly the oxidation of reduced-ferredoxin, ie this is an oxidative reaction driving an electrochemical Na+ gradient to phosphorylate ADP to ATP using a Na+ driven rotary ATP synthase.

It is oxidative phosphorylation.

Oxidative-phosphorylation is as primordial as the exodus of prokaryotes from hydrothermal vents.