Just a brief mention. Poor girl. Wrecking your health on macrobiotics and fish. The things people do! Interestingly it reminds me of the vegetarianism and hypovitaminosis D in Glasgow. Meat seems to be more effective than D supplements, though D will do the job in big enough doses...

Still not a lot of net or thinking time but a post is cooking.
Posted by Peter at Saturday, June 26, 2010 78 comments: 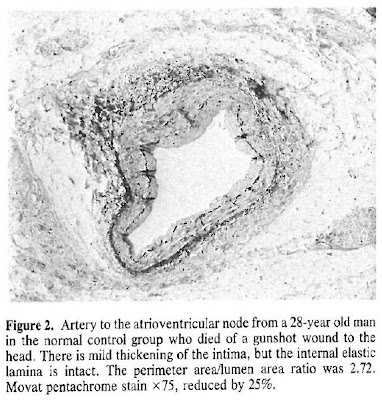 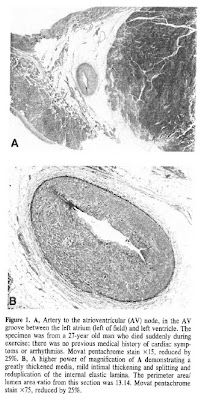 Afterthought: I wonder whether location of the artery matters. The left anterior descending coronary artery, where I have my seven point calcium score, is the least supported by cardiac muscle, so experiences the greatest trans-mural pressure gradient during systole. LAD is the classic site for calcification in non smokers. It would be interesting to see if sudden death victims have more superficial arteries supplying their AV node than non sudden death people........ Haven't checked the anatomy for this, hmmmmm.
Posted by Peter at Wednesday, June 02, 2010 7 comments:

It's official (according to me), Dean Ornish is the cause of the current reversal of the recent fall in global temperature cause by us eating all of the mammoths. That's one hell of an achievement for one person's flatulence.

You have Elizabeth to blame for this post!
Posted by Peter at Tuesday, June 01, 2010 3 comments:

A must-read pdf from Carlos through THINCS. Download and keep somewhere safe. This is a classic.

From the comments: O'Primitivo's link. Many thanks. No idea why the Japanese characters pop in to that first link.....
Posted by Peter at Tuesday, June 01, 2010 8 comments:

I thought I might just take a little time for a brief post , just some lightweight stuff from up here in Glasgow.

Glasgow is generally considered to be one of the less healthy cities in the UK, in terms of chronic disease. That makes it an excellent test-bed for ideas which might improve the health status of the population here and for the rest of the UK. You would have thought that we Glaswegians had nothing to lose from a dose of healthy eating. Siobhan Higgins and her group decided to test whether the current healthy eating advice from the Food Standard Agency (as of 2007) and the advice from the Department of Health, not updated since 1991, was good for Glasgow's post menopausal women. Or not.

The results of the Higgins study were published in 2009, so "nae rush" about checking the 1991 advice from the Department of Health.

The FSA-DoH advice is to reduce fat, especially saturated fat, to reduce sugar only if it is >10% of calories, plus to eat lots of stuff which is going to go down the loo 12 hours later (fibre). 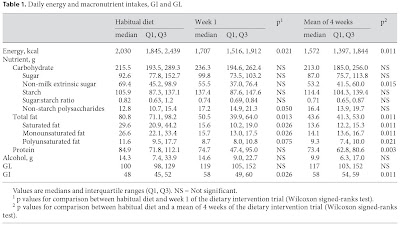 The conclusion is that following UK Government advice, as epitomised by the FSA, damages every measured parameter reported in the study and probably damages a number more which were measured but didn't get reported. There is one exception, more on that later.

The change in HDL (downwards, of course) was not only statistically significant but biologically and probably clinically significant too (to a lipid hypothesis believer like Higgins). Of course this is rationalised by claiming that a subnormal HDL level is GOOD thing if you have a low HDL due to eating to FSA advice. The same low HDL is lethal if you self-select your diet. Hmmmmmmmmmm. What's the science behind this strange variation in the significance of a low HDL level?

Garbage trucks. My son loves garbage trucks. The blokes doing the wheelie bins always give him a wave and a grin. Back in Berkshire it was one of the highlights of his week! Aparently HDL is a garbage truck. Eat to FSA advice and your need for garbage trucks goes down. Woooooow! FSA + low HDL = Good Thing.

How true is this? Well Higgins has a reference! This is what she says:

Reference [27] says that a high carbohydrate diet lowers your HDL by decreasing production of ApoAs. The implication is that this is Good. I think that's bollocks. If you believe low HDL is bad, it's bad. Otherwise why measure the stuff, why try and raise it with torcetrapib?

FSA-DoH advice dropped these women's HDL to an unacceptable level. This is unacceptable. The women were injured. Full stop.

So what else happened? Despite weight loss triglycerides increased, fasting glucose rose, fasting insulin rose, HOMA rose, LDL dropped (probably smaller and denser LDL, obviously this was not checked but it will have been the case) and CRP rose.

Luckily very few changes reached statistical significance within 4 weeks, but then it is hard to take a normal post menopausal woman in Glasgow and make her frankly diabetic in 4 weeks. But you can sure as hell get her started! Just employ a mainstream dietitian spouting FSA advice. I wonder if they did power calculations to make sure the p value for changes in glucose and insulin would fail to reach statistical significance by limiting the study size to just 12 victims? Bit of a cock-up on the HDL calculation then...

I was also wondering about the weight loss. It would have been interesting to measure waist:hip ratio and absolute change in waist circumference on a disaster diet. I was disappointed they didn't report these. Until I read the methods carefully and found that they actually did measure them. They just didn't report the changes in those measurements. I read the results very carefully, not reported. So I think we can safely assume the waist expanded, the hip measurement didn't change and the victims lost muscle. Non of these changes need to have been statistically significant but because fasting insulin rose it seems reasonable the assume the changes were toward that pot bellied, sarcopaenic physique so beloved of a modern dietician.

"In conclusion, the results of this study showed that whilst following the UK dietary guidelines to increase carbohydrate and reduce fat intake did appear to have adverse effects on HDL cholesterol concentration, these same dietary changes were also associated with some positive health effects on the antioxidant potential of the plasma and a reduction in BMI."

No no no no no. The HDL didn't "appear" to drop. It dropped. It dropped right out of the clinically acceptable range. These women were injured in the study, directly by the dietitians and indirectly by the FSA. I wonder if they were told to go back to their previous self selected diet to get their HDL back in to the clinically acceptable range and their triglycerides down? Ha ha ha.

Last two comments are about those positive effects, those on FRAP and BMI.

The group never mentioned uric acid. That's the mammalian antioxidant which normally goes up in response to fructose intake and gives the superficial impression that the sucrose in fruit is somehow healthy. I can't see the extra sucrose in any of the diet tables (obviously it went up as a % of calories, I was looking for an absolute increase) but I'm suspicious it's there somewhere. What was the uric acid level? Not measured. Duh.

The BMI dropped. Whoopee. Talk about treating a number! BMI decrease, especially in older people, is bad news anyway (for all cause mortality). Imagining that weight loss which is accompanied by a deterioration of every measured parameter is "a positive health benefit" just insults the intelligence. If it were "weight" per se which mattered then carrying a backpack or gaining muscle would be risk factors for heart disease.

So, can you make a resident of the least healthy city in the UK less healthy by altering their diet? Absolutely. Just follow FSA advice.