Sugar on your coconut oil?

Soybean Oil Is More Obesogenic and Diabetogenic than Coconut Oil and Fructose in Mouse: Potential Role for the Liver

In addition to looking at soybean oil they also looked at fructose. This is what eating 25% of your calories as fructose in your pelleted food does to your liver. Again red indicates lipid deposition in the liver.

First a reiteration of 5001 vivarium chow: 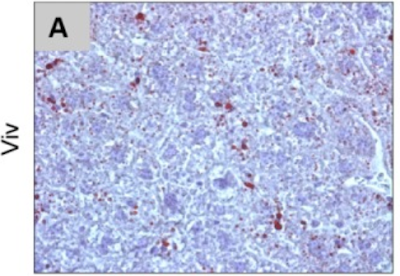 Then 25% fructose on the high coconut background:
and on  the 10% soybean oil background
So I think we can say that eating 25% of your calories as fructose might be excellent if you are a Bl/6 mouse who wants a fatty liver.
But what does fructose do to your weight/fatness?
That depends. If you are on coconut oil (+2% calories as linoleic acid) it increases your weight towards the weight of the soybean oil group.
If you are on soybean oil then including this much fructose decreases your weight to that of the coconut plus fructose group.
How come?
Sadly feeding mice on 25% of their calories as fructose generates rectal prolapses in 30-40% of those mice. And rectal prolapse is, in all probability, just a surrogate for chronic gut rot.
I would be very, very cautious about interpreting any of the data from mice with this degree of gut dysfunction. Which does nothing to allow me to decide whether the sucrose present in high "fat" diets such as the Surwit coconut/sucrose diet or any of several butter oil/sucrose diets is significant.
Which would be nice to know.

So let's look at a paper by Surwit's group:

Reversal of Diet-Induced Obesity and Diabetes in C57BL/6J Mice

All you have to do to reverse both obesity and diabetes in Bl/6 mice is remove the fat from the diet.
Here are the compositions. The low fat diet always reversed the problems from high fat in a few months. For Bl/6 and A/J (less obesity prone) mice: 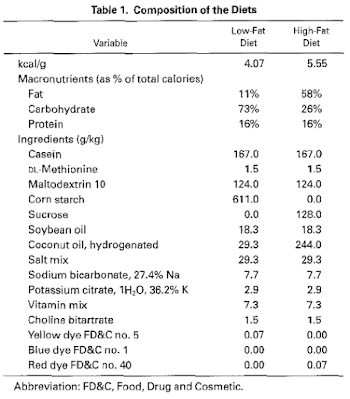 If you glance down through the ingredients things look very similar except for the fat and carbohydrate composition. Right down to the inclusion of exactly 18.3g/kg of soybean oil to avoid essential fatty acid deficiency in each diet.
Aside: Of course most of the components are the same by weight. But not by calories. The high fat diet dilutes everything with saturated fat calories, by about 25%. This includes the linoleic acid from the 18.3g/kg of soybean oil. This is a very low (~roughly 1.6% kcal) LA diet. End aside.
Oh, and the sucrose. When the weights per kilogram of most components of the diets are identical to a decimal place, suddenly 10% of calories as sucrose arrives in the high fat diet. Why? Surwit discusses its inclusion and correctly points out that 10% sucrose in low fat diets does not cause obesity or diabetes in Bl/6 mice. But he does not address why the sucrose was "needed" in the high fat diet.
I leave you to speculate as to whether the sucrose is essential to the obesity model.
Okay, okay. I won't.
We just need this paper
Medium-chain fatty acids ameliorate insulin resistance caused by high-fat diets in rats
The high fat diets contain about 40% of calories as MCT or long chain fats, both have around 1.6% of calories as linoleic acid. Oh, and were fed to rats, not Bl/6 mice. Here are the weight gains over the first month 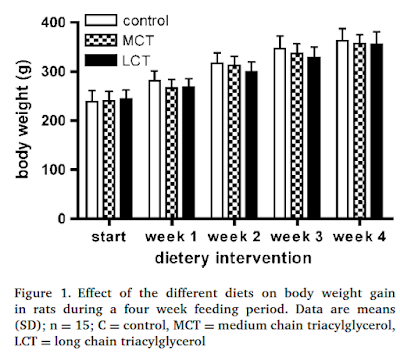 Essentially the MCT diet is the Surwit diet without the sucrose. Not exactly obesogenic. It strikes me that the sucrose is essential to develop pathology on high fat diets. If you want to call obesity pathology, see below.
The mechanism can be best summed up as "fructose is very complicated", ie I dunno.
Of course, as we do know, the obesogenic and diabetogenic Surwit diet is the one Jim Johnson's lab used for longevity/insulin gene studies. I blogged about it here.
They found reduced insulin exposure promoted peak longevity on standard mouse chow. However maximal median lifespan extension came from the Surwit diet despite the mice with "normal" insulin gene dose becoming obese and hyperinsulinaemic on said diet.
My take home message is that becoming fat and diabetic on a low linoleic acid (+ 5% fructose) diet is possible and may be aesthetically problematic but it doesn't carry the vast array of mid to late life illnesses associated with becoming obese using linoleic acid. Peak longevity may be a different matter.
The relevance of sucrose inclusion for obesity generation remains fascinating. I think it's real.
Peter
Posted by Peter at Wednesday, November 30, 2022 9 comments:

Labels: Sugar on your coconut oil?

Over the past six months or so I've spent a lot of time thinking about all sorts of things. Two of my main irritating problems are the obesogenic effects of diets high in fully hydrogenated coconut oil or butter oil, at least for rodents.
These matter for me because rodents (other than the C57Bl/6 mouse) mostly have perfectly normal mitochondria and so provide a reasonable model for extrapolation to humans.
I cannot explain these via the F:N ratio of the lipids so they then challenge my whole hypothesis. I guess the first possibility is that I am simply incorrect so should abandon my pet ideas. Possible, but not easy.
Second is that the medium chain triglycerides in coconut oil (and butter?) are handled differently from longer chain lipids. They certainly are, with limited penetration in to chylomicrons and marked diversion to the liver via the portal vein as free fatty acids. The liver "sees" them, adipocytes don't. To some degree, nothing in biology is 100%.
Also the fate of medium chain fatty acids in peripheral cells, when they do get there, may be different to longer chain fatty acids. I am reminded of the very poor insulin secretagogue effect of octanoate on the isolated pancreatic preparation in 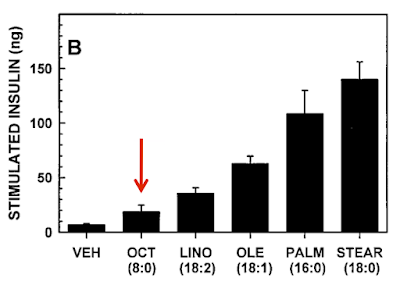 which makes octanoate look worse than linoleic acid in promoting insulin secretion (and presumably the same applies to generating insulin resistance in target cells). This would fit with medium chain fatty acids being obesogenic despite their desirable F:N ratio, but without any insight as to how or why.
The final possibility is that the effect of linoleate oxidation differentially affects high and low fat diets. Under low fat diets the ability to resist insulin comes, in my opinion, from the input of electrons via the glycerophosphate shuttle converting an NADH input to an FADH2 input to the electron transport chain. From fatty acids it's all about NADH vs FADH2 at electron transporting flavoprotein dehydrogenase. Do these mechanisms kick in at identical levels of caloric ingress or are there subtleties of high vs low fat diets?
So lots of pondering and no answers.
I have extracted a little more information from this paper
Soybean Oil Is More Obesogenic and Diabetogenic than Coconut Oil and Fructose in Mouse: Potential Role for the Liver
The group didn't measure the linoleic acid content of the diets they fed but their intervention diets were composed of materials with very tightly defined LA contents, so their calculated amounts are likely to be accurate.
Here we have the growth rates of mice on chow (5001 "vivarium" rodent food termed Viv) or on an high fat diet based on fully hydrogenated coconut oil + 2% of calories LA or partial replacement of coconut oil to give 10% of calories from LA. Here are the growth curves: 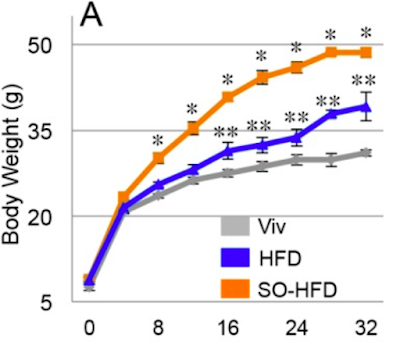 The impression here is that the blue line of the fully hydrogenated coconut oil diet (+2% LA) is more fattening than the (grey line) Vivarium chow, though not as badly as the orange line of the 10% LA diet.
You could start to think about all of the differences between 5001 and the various high fat diets but the simplest is to extract the LA contents from Table 1: 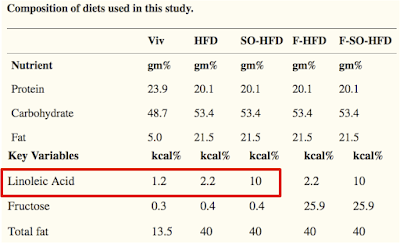 which lets us label the growth graphs with the LA contents thus: 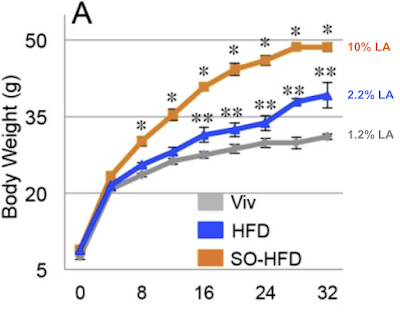 An interesting question might be where 4% LA (Surwit-like) diet might have placed the growth curve, even more interesting would be to almost half the LA% to the 1.2% supplied by 5001.
That's not something that is easy to find. Obviously there is a certain amount of work with linoleic acid free diets used to show the problems and benefits of essential fatty acid deficiency in rodents, usually based around fully hydrogenated coconut oil. I quite like this one where borderline essential fatty acid deficiency is remarkably protective against systemic lupus in a mouse model using non-hydrogenated coconut oil
Prevention of Glomerulonephritis and Prolonged Survival in New Zealand Black/New Zealand White F1 Hybrid Mice Fed an Essential Fatty Acid-deficient Diet
So limiting linoleic acid to levels present in non hydrogenated coconut oil (less than 1% LA) allows growth and health in this model while producing zero obesity using approx 40% of calories from coconut fat. 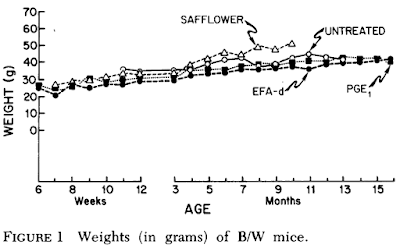 So it appears that the obesogenic effect of coconut oil based diets is not intrinsic to the MCT content but some obesogenic effect of linoleic acid on this background is present at 2% of caloric intake and spectacularly so at 10% of calories.
Here's a little histopathology for those PUFA-philes who follow any of the conventional diet gurus on 'tinternet. If you like soybean oil as a health food, you go for it, fine by me!
Liver histopath after 35 weeks on 5001 chow. Red dots are lipid: 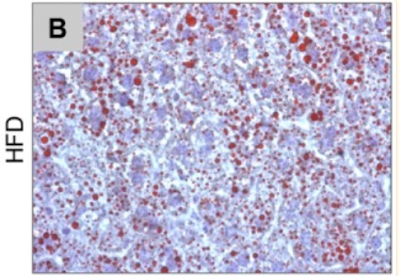 and on a cardiological nirvana of 10% calories from soybean oil derived linoleic acid:
Clear balloon cells are very poorly liver cells. Now, I wouldn't wish such a liver architecture on to anyone but if I was pushed in to a corner I might consider Prof Risérus, lead author of
Dietary fats and prevention of type 2 diabetes
as being a possibly deserving recipient.
Co-authors Walter Willett and Frank Hu might be candidates too.
Peter
Posted by Peter at Monday, November 28, 2022 12 comments: