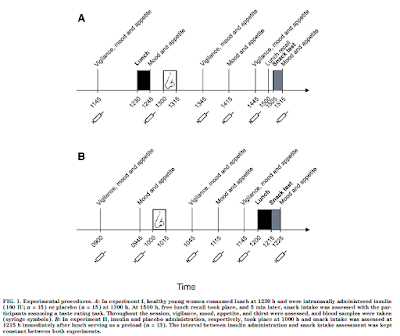 Now it's time to look at the simple situation of men given intranasal insulin. We have a chronic study using 40iu and an acute study using 160iu.


I've not found an acute study using 40iu but we can be pretty sure it works in the same manner as the acute 160iu dose. The only real difference is that 160iu spills over in to the systemic circulation whereas the 40iu doesn't. This is unimportant for acute studies as the effects of peripheral and central insulin are identical before the development of CNS insulin resistance occurs.

Both allow facilitated ingress of calories in to peripheral cells, and help keep those calories there, until the cell signals that it wants no more.

With supplementary CNS insulin peripheral cells become "full" quicker, generate ROS sooner and resist insulin sooner. The brain senses that calories are no longer being taken up. So men stop eating sooner. This is not a central effect on appetite. It's a peripheral effect of allowing calories to fill peripheral cells sooner. So eating stops about (in the 160iu study) 200kcal prematurely. Adipocytes (and other cells) are full. The main difference compared with placebo is that there is less food present within the gut.

We know, at 40iu of intranasal insulin four times daily, that there is no weight loss over three weeks. After one dose of 160iu caloric intake after the first meal is reduced compared to placebo. If that were to translate to 600kcal/d (assuming three meals) there should be some weight loss. Ignoring changes to uncoupling, ie metabolic rate, this suggests that at subsequent meals there is a greater calorie intake, or more snacking between meals.

You could simply say that insulin makes you hungry (have I mentioned this before?). But that would be wrong. Extra insulin allows cell fullness to signal to the brain to stop eating when there is less food in the gut than there should be. Less food in the gut means you get hungry sooner. That means you eat more subsequently. By just enough to make up for the deficit. Because you skimped on a meal. So there is no weight loss for three weeks...

People will then eat more at each meal because it takes longer for their peripheral cells to get full, so there will be more food in the gut at the time of satiation kicking in. But, with less CNS augmentation of insulin's peripheral action, lipolysis is free to proceed at a higher rate per unit insulin in the blood stream. So hunger is deferred by the augmented availability of stored FFAs. Oxidising these stored FFAs is, by definition, fat loss.

That makes sense to me and explains why men who are already insulin resistant derive no benefit from intranasal insulin.

BTW, I'd expect the 40iu dose to work better long term than the 160iu dose provided the systemic leakage of insulin after 160iu outweighs the localised effect of developing insulin resistance within the CNS only. At four times the dose the CNS insulin resistance should occur sooner, to facilitate fat loss, but the systemic spill-over will always augment fat storage. Which would win?

The Hallschmid lab does not seem to have done a long term study of insulin at 160iu four times daily. It would be interesting to know what might have happened. Or maybe they did a pilot study and decided not to go there.
Posted by Peter at Wednesday, September 12, 2018 No comments:

What causes satiety, if it's not insulin? This has to be understood if there is to be any chance of understanding the effects of intranasal insulin from the metabolic point of view.

Let's begin with individual cells, these are the entities which need to control metabolic substrate availability.

You eat some food. Plasma glucose and chylomicrons/FFAs rise, delivering energy to peripheral tissues. In the early stages of food absorption both glucose and FFAs enter cells under the facilitation of insulin. They do this easily, the cells are "hungry".

As an individual cell becomes replete it has to signal that it doesn't want any more metabolic substrate. This is achieved via the CoQ couple acting as the master sensor for metabolic energy status. It is being reduced using NADH from the cytoplasm (the glycerol-3-phosphate shuttle), by FADH2 input via complex II (acetyl-CoA in the TCA) and via FADH2 input from ETFdh (from beta oxidation of saturated fats). And of course from mitochondrial NADH via complex I. Given a high delta psi (ie minimal consumption of the proton motive force because ATP is already plentiful) this CoQ reduction eventually facilitates RET through complex I to give superoxide generation in order to stop insulin signalling. Which then limits cellular caloric ingress. This can be thought of as the "cellular satiety" signal. It is ROS generated. Let's say that again:

Satiety in peripheral cells is an ROS signal. It is generated in the mitochondria. This is pure Protons.

Now let's scale that up.

As more and more peripheral cells decide that they no longer need to respond to insulin then there is less and less of a "sump" available for absorbed calories to drop in to. The availability of calories which no longer have anywhere to go is the whole-body driver of the need to signal satiety. This surfeit of calories will be sensed in the VMH and the cessation of eating will be ROS mediated.

These people have the correct sort of idea:

and so do these

There is no need, to my mind, for CNS insulin to be involved. While insulin clearly has many effects in the brain, neurons do not appear to use insulin signalling to control caloric ingress, so insulin signalling should not influence ROS generation. Astrocytes might use insulin as peripheral cells do, but not neurons. After a meal, during food absorption, the brain can just get on with its normal insulin-induced physiological function, which is the facilitation of calorie storage in adipose (and other) tissues. Until they are full.

I'll make that clear: Satiety occurs when the brain senses that calories are no longer being accepted by the peripheral tissues using an ROS signal. Superoxide will be that signal.

That's what I consider to be the normal physiology.

We can now apply this to the various studies using intranasal insulin.