I think this one is too important to leave it where George Henderson posted it in comments:

Of mice and men: Factors abrogating the antiobesity effect of omega-3 fatty acids

It appears that the weight loss routinely found in mouse experiments is remarkably difficult to replicate in humans. It can be abrogated (their word) by sugar, refined carbohydrates and omega 6 fatty acids. The refs are in the paper.

This gives the possibility for a given lab to set up a specific experiment to produce the result it wants/requires by manipulating these factors. That's called a pilot study and it doesn't often get mentioned in the paper per se. The mouse weight loss will not be replicated by a human popping three fish oil capsules before a meal of chips fried in sunflower or soya oil with a Big Gulp or two on the side.

George looks at this from the endocannabinoid signalling level within the brain.

I look at it from the adipocyte mitochondrial level control of insulin signalling coupled with the amount of insulin generated. They are both layers of signalling derived from the same process.

Quick edit: Of course if a human removed sugar, refined starch and seed oils from their diet they might lose weight spontaneously with or w/o the fish oil. Maybe it might help, maybe not, but I doubt that has been looked at!
Posted by Peter at Tuesday, July 21, 2020 4 comments:

I have a feed to my email account which has worked out that I am interested in longevity studies and particularly the role of PUFA in the inner mitochondrial membrane. This paper popped out today:

Dietary fatty acids and oxidative stress in the heart mitochondria

The diets were roughly 16% of calories as coconut oil, olive oil or fish oil. Fed to rats for 16 weeks, which is a fair length of time in the life of a rat. They were interested in the effect of unsaturation on the measurable oxidative damage done to mitochondrial proteins and the peroxidation of inner mitochondrial membrane lipids.

TLDR for the paper itself: If I was taking fish oil I would stop.

But of course I'm more interested in the body weights.

Here is the summary of the lipids in the diets, butchered out of Table 1:

And here, in its entirety, is Table 2 giving the weights at the end of 16 weeks. We can ignore the fish oil plus probucol group, except to note that they were even fatter than the fish oil group, don't you love those good old antioxidants:

Obviously none of the weights are significantly different from each other and 10-20 grams on a 500g rat is not a huge difference. Except food supply was limited to a fixed, slowly increasing amount as the rats grew. There is no mention of uneaten food so I think it is reasonable to assume all rats ate all of the food offered. So on a rigidly fixed calorie intake the fish oil fed rats were heaviest. I won't mention Arnie rats or C57Schwartz6 mice after my embarrassment in the comments to the last post.

Very roughly the modest excess weight goes up with the double bond index of the diet. On a rigidly fixed, mildly hypocaloric diet, even if p stays stubbornly above 0.05.

Also distinctly non-significant but appropriately trending are the fasting glucose readings. Those are in Table 3:

Highest in the Coconut oil group, trending down to lowest in the Fish oil group. Fish oil leaves you insulin sensitive.

If the rats were allowed to eat ad lib then the calories lost in to adipocytes would be replaced by eating more food. Eating the food would get the blame for the adipocytes being bigger than they ought to be.

Eric put various links in the comments to the first PSCK9 post leading, eventually, to this study:

which gives us these results:

"These data indicate that moderate lifelong reduction in the plasma level of LDL cholesterol is associated with a substantial reduction in the incidence of coronary events, even in populations with a high prevalence of non–lipid-related cardiovascular risk factors."

Well. There we go. Again.

Soooooo. What is the glaring omission from the study results?

That's correct, there is no body count. Presumably the paper was written by cardiologists and/or lipidologists.

Perhaps we should get a body count.

Lets go to UK Biobank and some folk in Denmark. Here we have

"Genetically low LDL cholesterol due to PCSK9 variation was causally associated with low risk of cardiovascular mortality, but not with low all-cause mortality in the general population."

Note, particularly that in the UK Biobank data, there was no significant risk reduction for CVD events in addition to the no, zero, zilch, nil reduction of risk in all cause mortality. None. I'm a subject in UK Biobank.

So why would anyone expect PSCK9 inhibitors, certainly in the UK, to do any better than genetic PSCK9 activity reduction?

Perhaps such people have a drug to sell in a broken paradigm.

Protons (54) The miracle of fish oil

This paper has absolutely nothing to do with obesity:

The researchers fed mice on chow until 450 days of age. For some they then started blending in sunflower oil (omega-6 based) and for others they added in fish oil to the same chow. The composition of the diets was sufficiently similar that there was no effect on lifespan found, either median or maximum. But there was an effect on bodyweight. I bring this up because, while sunflower oil would be reasonably expected to be obesogenic, fish oil certainly would not.

Unless you view it from the Protons perspective of course. Here the mitochondrial oxidation of omega-3 PUFA should be more obesogenic than omega-6, which is almost never the finding in rodent studies and which is why, over the years, I collect any studies which suggest this. To confirm my bias.


Crucially the people running this current study were interested in longevity, not obesity.

Despite this, not only did they weigh the mice weekly (which most studies do) but they also reported those weights in detail (which many don't). 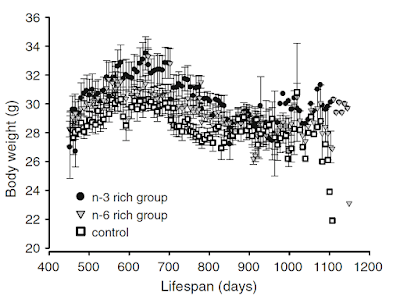 If we take the rather crowded data points over in to PowerPoint we can crudely rough in some curves: 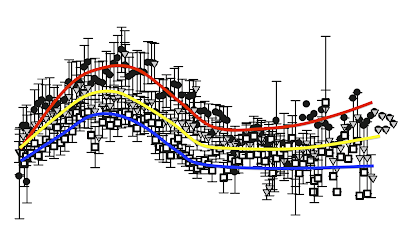 The red line is the fish oil group, yellow the sunflower oil and blue the chow.

Fish oil should make you fat. Confirming this bias is remarkably difficult, so you can imagine how I feel about these data points.

Quite how fish oil can be shown to be so beneficial most of the time is beyond me. I think the aphorism goes something like "current medical research reflects current medical bias". Possibly from John Ioannidis?

*Having had the joke explained to me in comments I can't look at this without giggling. C57Schwarz6 mice!
Posted by Peter at Sunday, July 05, 2020 27 comments:

For a variety of reasons I'm rather ignoring the blog at the moment. But this is too good not to post, HT to Carlos Monteiro for the link:

PCSK9 inhibitors do not work. However much they cost, they're useless.

This confirms (again) that the lipid hypothesis of CVD is bollocks. It was so in the 1950s. Nothing has ever changed that.

Happily only Evolocumab will kill you prematurely (with the data so far).

EDIT cavenewt emailed me this press release (see her comment for quotes). Permanent alteration of your PSCK9 gene... what could possibly go wrong? END EDIT
Posted by Peter at Thursday, July 02, 2020 14 comments: