This paper came up in comments to the last post:

I think we can say that, at least in athymic nude mice (which do not seem to be derived from the C57Bl/6 strain), omega 6 PUFA do not cause obesity when compared to either a low fat or high stearic acid synthetic diet (ie the low fat arm is equally synthetic, not more "food-like" ie not chow). At least when you look at total body weights: 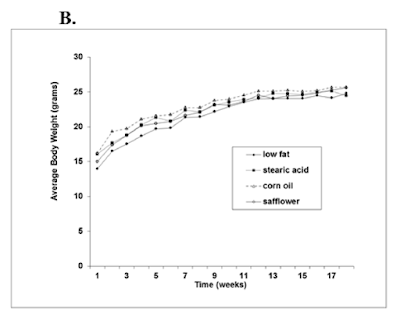 So omega 6 PUFA appear to get a free pass here. The actual composition of the diets is in Table 1 of this previous paper and all four contain generous amounts of starch and equal amounts of sucrose:

However if you dexa scan the mice you find that the low fat, corn oil and safflower oil groups all have reduced lean mass (probably muscle) and increased visceral fat mass compared to the stearate group. A picture is worth a thousand words so here are some postmortem images with the size of the inguinal fat pads outline by the authors of the paper (no need for me to doodle on this one!). Fig 3:

Now, cavenewt questioned the relevance of weight/fat alterations from stearate compared to other potential health effects, particularly its affect on cancer metabolism.

The third paper from this same group is

I've been through all three papers and searched on "insulin". The group appears to have no concept that insulin has anything to do with adipocyte size or cancer progression.

A slight handicap when it comes to insight.

In the stearate-visceral fat paper there is a single measurement made of plasma insulin/glucose. Insulin does not vary between diet groups but glucose is significantly lower in the stearate group. I have been unable to work out if the measures were fasting or fed, or even what time of day the samples were taken (ie when the mice were killed). I think that with glucose values in to 200-250mg/dl range these were probably "fed" glucose and insulin levels. The paper does not give us the measured insulin levels, merely that there was no statistically significant difference between groups. But insulin levels come with such huge standard deviations that getting a p value below 0.05 with small group sizes is not going to happen. A ns result does not automatically mean that there were no differences.

Of course a single insulin measurement at one terminal time point tells us nothing about the long term 24h exposure to insulin of the mice, of their adipocytes or of their cancer cells.

So we have to, once again, look at the significance of the changes in fat distribution to attempt to gain insight in to overall insulin exposure. I spent quite some time looking at visceral fat and its significance early last year in this post:

and on how stearate might avoid systemic hyperinsulinaemia here:

Visceral fat is a surrogate for chronic hyperinsulinaemia, particularly fasting hyperinsulinaemia. While I consider non-inflamed visceral fat to be completely benign, or even beneficial for controlling the hunger of fasting, the insulin which maintains that visceral lipid storage is not benign. Chronically elevated insulin (or, more accurately, insulin signalling) should drive both visceral fat storage and xenograft tumour growth in the mice. Probably in humans too.

Happy Solstice and assorted mid-Winter celebrations. If you live in the northern hemisphere that is. Not that I envy those with a Solstice-on-the-beach-without-wooly-hats-and-gloves situation!

Protons (52): A correction and a few thoughts on satiety

There has never been a completed concept of the Protons thread. Logic and data have allowed it to emerge and I still have no idea where it will end, but there have been a few mis-steps on the way. A reader recently pointed my incorrect post from 2013 where I was looking to see how fasting or ketogenic diets might blunt insulin signalling. Nowadays my feeling is that it is high physiological ROS generation which achieves this. At the time I clearly got it wrong with:

"We appear to have two basic states of the electron transport chain. There is the situation under fasting or ketogenic dieting conditions. Here delta psi is low, complex I throughput is low and there is plenty of FADH2 input through electron transporting flavoprotein dehydrogenase coming from the first step of beta oxidation of real fats, like palmitic acid. With a low delta psi it is near impossible to generate reverse electron flow through complex I so activation of insulin signalling is rapidly aborted by the continuing action of tyrosine phosphatase".

That does not appear to be the case and, having thought about it, my email reply went like this. We had been chatting about ketones, delta psi, RET and insulin resistance from ketones vs from saturated fats. I may as well copy/paste some of it here, slightly edited for clarity, and place a link within the 2013 post:

"My thinking currently is that ketones do not induce insulin resistance unless, like glucose, there is enough input via complex II to do this. So RET is possible but will only occur when the cell has adequate caloric supply. If you combined ketones with stearic or palmitic acid the long chain fatty acid would undoubtedly input at ETFdh and drive RET, rather than it being the ketones. Incidentally, this probably also represents "cellular satiety". Clearly under physiological conditions ketones will normally be associated with elevated FFAs.

The differential effects of FFAs vs ketones would be that FFAs would then drive insulin resistance in cells which can metabolise them, muscle etc, but ketones would drive far less RET in cells which require some small amount of glucose in excess of the energy supplied by the ketones themselves, ie neurones…

On the adipocytes things look more complex. Undoubtedly both ketones and FFAs exert a negative feedback on lipolysis in addition to any effect of their driving/not driving RET during oxidation. But some degree of insulin signalling is essential to physiology in addition to this negative feedback, otherwise we get diabetic ketoacidosis due to failure of insulin availability to oppose glucagon.

Once you start to think about stearic acid plus glucose you have to differentiate between cellular levels and dietary levels. Simply treating isolated adipocytes with elevated glucose and elevated long chain FFAs will result in ROS. If you set your experiment up correctly (no MUFA, no PUFA, high glucose) the resulting RET will result in apoptosis or necrosis. There is an infinite supply of papers doing this to almost any cell type.

In the whole animal things are different. If physiology is functional the stearic acid will provoke a prompt first phase insulin response and will effectively augment insulin delivery via the portal vein to the liver. Insulin acting in the liver will limit glucose release to the systemic circulation and so limit the need for systemic hyperinsulinaemia to deal with the glucose. Then the animal stays slim as there is minimal systemic hyperinsulinaemia.

If physiology is non functional we are talking DM T2 which is largely the aftermath of chronic PUFA ingestion and things then become even more complex. The low carb approach side steps the problems of failure of correct insulin secretion/hepatic signalling by simply reducing the reliance on any sort of insulin signalling beyond the most minimal needed. Then stearic acid becomes problem free. When (or if) physiology normalises then some degree of glucose consumption by mouth might be acceptable along side saturated fats but by then anyone with any sense will be fat adapted and unwilling to go back to a mixed diet".


This set of thoughts is currently relevant as Brad Marshall has taken the concept of stearic acid as the best physiological generator of adipocyte physiological insulin resistance and converted it in to a moderate carb, highly saturated fat diet with interesting results. You can read about his croissant diet on his blog Fire in a Bottle: Introducing The Croissant Diet. This experiment is based on the PhD of Valerie Reeves where a mixed macro diet based around stearic acid markedly limited weight gain in db/db mice. The db/db mouse is an extremely severe obesity model as it lacks functional leptin receptors. So a complete lack of leptin signalling can be side-stepped, still in the presence of starch, by supplying roughly 40% of calories as predominantly stearic acid. Not low carb. Not ketogenic. It works (from my point of view) by directly manipulating ROS generation (ie increasing it) at the electron transport chain level to signal "cellular" satiety, with appropriate ability to resist insulin's fat storage signal. This will be recapitulated in the brainstem neural circuits which control whole body satiety. Signalling from the ETC is core. It works by generating physiological insulin resistance and clearly over-rides any effect from leptin signalling.


Also in the comments of the last post came this gem from ctviggen, worth a post in its own right. Interesting paper. Limited insights within the discussion but great data!

While all of these ideas were kicking around the concept of fasting as a state of caloric excess emerged. Obviously, not eating makes you hungry. Initially. There comes a point where, when insulin is low enough and FFAs rise to levels approaching over 2000micromol/l (plus ketones), when hunger decreases. Prolonged fasting does not invariably generate ravenous hunger. This is because FFAs (and ketones) represent an energy glut beyond any single cell's imagination and it does not require insulin signalling to access it (there do appear to be other controls on ATP generation). So cells which can metabolise FFAs should behave as it they have more than enough calories so that they should resist insulin. Access to excess metabolic substrate must result in ROS and the appropriate disabling of insulin signalling. Starvation as generator of a caloric excess signal... An interesting concept.

And PUFA, failing to generate adequate ROS, might well lead to glucose "wastage" in to cells such as myocytes which might well result in profound and symptomatic hypoglycaemia, essentially a failure of satiety signalling. Another interesting idea. Which clearly would not happen if metabolism was based around stearic acid...