On belief structures in lipidology

"Any apoB-lipoprotein less than 70 nm in diameter can pass be pass thru endothelium - The LDLs are 20.5-25 nm. Remnants and IDLs are less than 70 nm and greater than 30 nm. The term small, dense LDL is way too simplistic - Big LDLs, like small LDs (less than 20.5 nm) if present in excess can invade artery"

This statement makes a prediction. It predicts that the accumulation of lipid in arteriosclerosis will be, initially, sub-endothelial.

As in this review of transcytosis (because passive "leakage" of LDLc down a concentration gradient across an endothelial cell layer is laughably impossible for particles over 6 nm across. No, that 6 nm is not a typo, according to the review). Not that "impossible" means anything to a lipidologist.

"During the initial stages of atherosclerosis, LDL particles are transported [transcytosed] across the EC [endothelial cell] barrier and accumulate in the subendothelial space".

So. All we need to do is a few post mortem examinations, find some poor people who had early arteriosclerosis at the time they died, and look for that lipid which will be sitting neatly under that single layer of endothelial cells lining their arteries. That is the prediction embedded in Dayspring's tweet.

If we go to this paper:

EDIT: from a link in Subbotin's excellent "Excessive intimal hyperplasia in human coronary arteries before intimal lipid depositions is the initiation of coronary atherosclerosis and constitutes a therapeutic target" END EDIT

we can find real images of real arteries from real people who died of non related causes while carrying different levels of arteriosclerosis: 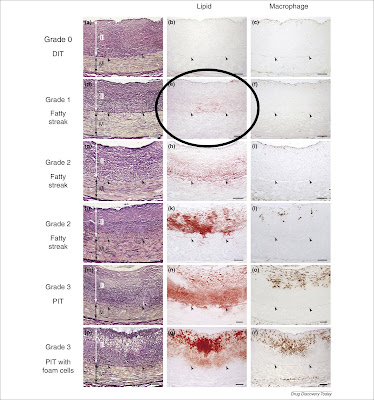 Left side images are van Giesen stained for histology, central images are with Sudan IV for lipid and right hand are immunostained with anti-CD68 antibodies to show macrophages. The pairs of small black arrowheads indicate the level where the intima stops and the outer media layer begins. The vascular endothelium is a single cell layer at the top of each image.

Let's look at the circled image in detail. This is an example of early atherosclerosis from a real human with real early changes who died of non related causes. It's just the sort of place you might hope to catch an LDLc particle creeping between the cells of a single endothelial layer or freshly spat out after transcytosis by an endothelial cell. Lipid stains bright red: 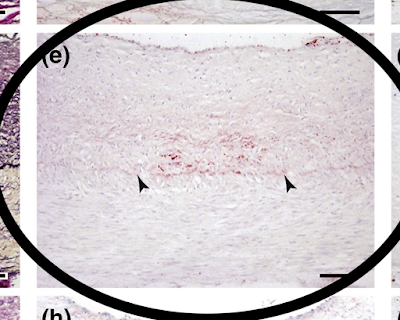 Well, there's the lipid, deep, deep down at the junction of the intima and the media, right between the arrow heads...

There is none anywhere near the endothelial cell layer. If you believe that LDLc, as a result of a concentration gradient between artery and sub endothelial layers, "moves" or "invades" across that endothelial cell layer you have to explain how there is none at all in the sub-endothelial area and there is a progressive accumulation at the intima-muscularis junction. How does the lipid get from the top of the image to the deep spaces without any of it showing up in the lipid-free zone between the two?

"Beam me down, Scotty" is undoubtedly the most plausible explanation.

It is very, very hard to explain how utterly disreputable the lipid hypothesis is. All of this angst about increased LDLc and/or apoB counts on LC diets is based on the assumption that somewhere, somehow, cholesterol is the cause of heart disease. How LDLc "invades" (by active and controlled transcytosis!) the sub-endothelial space, disappears from there and then suddenly appears at over 200micrometres deeper, with none showing in the intervening zone requires a belief tenet which bears no resemblance to reality...

This was bollocks in the 1950s. My question is, as always, at what time did it stop being bollocks?

But trans-endothelial "invasion" is beyond belief.

This would suggest that all lipidologists are talking crap.

Nothing new there then.