Take 517 sequential NSTEMI*(see edit) heart attack victims and measure their LDL cholesterol on admission to hospital. You know, that artery clogging lipoprotein of which you cannot have too little, the lower the better, take this statin blah blah. Divide those patients up in to cardiological Nirvana (those with a value below 105mg/dl, mean value 79mg/dl) or those with astronomically high LDL, ie > 105mg/dl, mean 144mg/dl. Gasp at the hypercholesterolaemia and be afraid.

BTW the MEAN LDL in the low group was 79mg/dl, some must have been well below this because the upper end of the range was 105mg/dl. What is someone with an LDL of below 60mg/dl doing having a heart attack, if the lipid hypothesis is correct? Oh, that means that....

Anyway. Wait three years and then do a body count. The heap is twice the size in the low cholesterol group than the high cholesterol group. This is statistically significant, p= 0.005, I checked the number of zeros. There may be some biological significance too, especially for those who died. I have mentioned previously the possibility of falling LDL being accompanied by a black cloak and scythe.

So the lower the better, if you want to be dead that is! 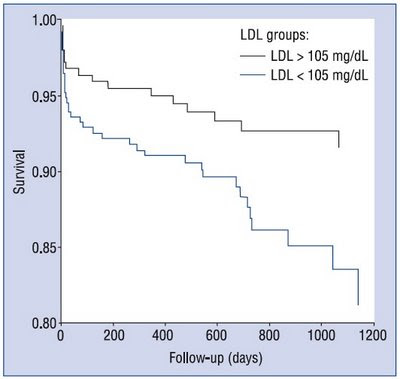 My take home message is that having a low LDL cholesterol, as guesstimated by your cardiologist using the Friedwald equation, is very bad news if you have just had a heart attack.

So what does matter for survival?

Does hyperglycaemia matter if you want to survive? Or perhaps HbA1c?

Certainly having a low LDL on admission is associated with an increased risk of being dead three years later.

Oh! Perhaps a continuous infusion of LDL might improve all cause mortality!!!!!! Now, where can I get a grant to test this hypothesis?

EDIT: NSTEMI added to increase accuracy, NSTEMI "only" represents more than half of all heart attack victims, see comments.
Posted by Peter at Friday, May 15, 2009 22 comments: