This paper is interesting (and badly written):

It uses a mtG3Pdh knockout mouse, which is essentially a mouse which behaves as if it was on an enormous dose of metformin without all of that toxic blockade of complex I which gives a potentially lethal lactic acidosis at high dose rates. If you feed these mice standard crapinabag they are phenotypically normal. If you feed them a diet consisting some casein, a little PUFA to avoid EFA deficiency and the rest of the calories from pure sucrose they become rather interesting.

Eating pure sucrose does not make normal mice fat. It does make them insulin resistant and hyperinsulinaemic and, of course, insulin resistant adipocytes refuse to retain fat unless insulin action is facilitated by the oxidation of PUFA. Hence the normal body weight.

But the knockout mice actually become slim on sucrose. Here are the data, we can ignore the heterozygous (HET) groups:

They are slim because insulin levels are low. From the Protons perspective the function of the glycerophosphate shuttle in the pancreas is to drive enough reverse electron transport through complex I to trigger insulin release. Less RET, less insulin release, less fat storage, less hunger. Here is the isolated response of the perfused pancreas model to hyperglycaemia: 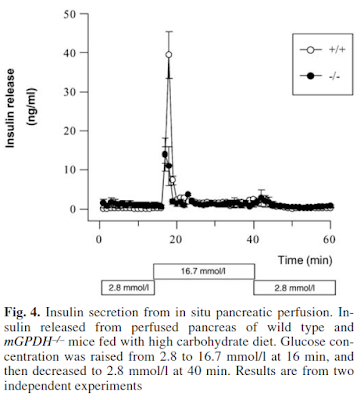 First phase insulin release is about a third of that in the normal mice. The mice are not diabetic because, in the absence of the glycerophosphate shuttle, RET to allow insulin signalling is generated by beta oxidation supplying electron transfering flavoprotein the CoQ couple via mtETFdh. Insulin signalling still happens but at the "cost" of increased lipid oxidation in the peripheral tissues.

What doesn't happen is sucrose induced insulin resistance. Again I consider this is triggered via the glycerophosphate shuttle causing RET at a level to shut down insulin signalling, which simply doesn't happen in the knockout mice. Lack of glycerophosphate shuttle also stops the generation of insulin-induced insulin resistance under conditions of high insulin concentrations coupled with energy replete cells.

Does anyone recall this figure from Metformin (01) post back in 2017?

Insulin was given at 90 minutes. At 150 minutes in the upper (non metformin-ed) rats insulin action starts to fail, at about the correct time for insulin-induced insulin resistance. By 180 minutes that upper trace, the non-metformin group, shows an upward trend in glucose as exogenous insulin levels are no longer high enough to overcome insulin-induced insulin resistance (the rats are DM T1 under insulin withdrawal).

At 180 minutes in the lower line showing metformin treated rats we can see the continued action of insulin being facilitated by the metformin because it blocks insulin-induced insulin resistance. It was mention in the comments to the post that, clinically, this effect of metformin might worsen the possibility of hypos in humans if combined with exogenous insulin usage. Potentially fatal hypos. 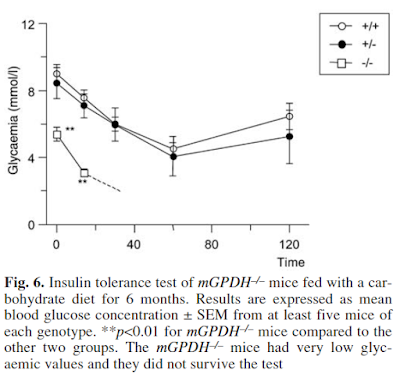 All of the mice with the mtG3Pdh knockout died under exogenous insulin. This is exactly how I would expect metformin to behave in humans using insulin. A functional glycerophosphate shuttle allowed a sucrose diet to block this fatal sensitivity to exogenous insulin.

Obviously the mtG3Pdh mice have a normal complex I. Might they still develop lactic acidosis? Sadly the group didn't look at this (they had no idea back in 2003 that they had developed a meformin mimic model mouse). I do think there might be some elevation of systemic lactate despite a normal complex I.

In the absence of the glycerophosphate shuttle glycolysis is going to run directly to lactate to maintain redox balance. If glycolysis proceeds at a rate in excess of oxidation of the lactate within mitochondria (recall oxphos is slow compared to glycolysis) then some glycolytic lactate will spill outwards, though this is never likely to reach ICU-needing levels. No need to have a complex I blockade to generate mild lactic acidosis.

Does this metformin-ed like mouse have the exercise gains seen in human cyclists after popping 500mg of metformin pre-race?

That requires that we look at a different model.