Happy Christmas all. Would have been Happy Solstice but one of our cats died that day. Anyhoo.

Back to this image from the Japanese paper of the last post, open circles are without metformin, filled circles are the same people taking metformin 500mg tid. 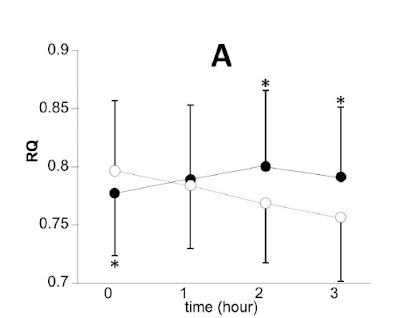 If we initially look at the fasting values for the RQ we see 0.8 without medication and 0.77 under metformin, so adding in metformin gives an increase in fat oxidation. A very simple explanation for this is that, via metformin induced blockade of mitochondrial glycerol 3 phosphate dehydrogenase (mtG3Pdh), there is less glycolysis derived electron input at the CoQ couple, so it is less reduced and so there is less tendency for reverse electron transport through complex I. This generates less of the superoxide necessary to trigger the initiation of insulin signalling. The cells then behave as if there is even less insulin present than the 25pmol/l measured, so free fatty acids are more available for oxidation due to this reduced insulin signalling.

The simple concept is of metformin as "LC eating in a pill".

The fed state is altogether different and diametrically opposite. Insulin levels are between 100 and 200pmol/l. Under these conditions the RQ is significantly higher under metformin, an RQ of 0.8 vs the non medicated RQ of 0.76, present at the two hour mark with the differential maintained at three hours. Under these conditions metformin is facilitating the oxidation of glucose while there are calories in excess of immediate needs available, many of them from the butter in the cookies.

If we consider that blockade of mtG3Pdh should blunt insulin signalling we have a paradox that by one hour after a meal insulin signalling appears to have been facilitated and at hours two and three this reaches statistical (and probably biological) significance. So how can the one drug have opposite effects under differing conditions?

My suspicion is that the drug is doing the same thing at all times but that insulin is doing different things at different nutrient availabilities. Re consider this graph from this post:

The initial conclusion here was that metformin only facilitates blood glucose reduction in the presence of insulin. Metformin should, theoretically, blunt the action of insulin. But if we consider that at high levels of insulin the function of that insulin is to limit its own action, I think it would be much better viewed as metformin blunts insulin induced insulin resistance. Insulin was bolused iv at 90 minutes. It will have given a massively supra-physiological plasma level. Insulin induced insulin resistance in the insulin treated group appears to be absent at 30 minutes (ie 120 minutes on the graph), to have started at 60 minutes (150 minutes on the graph) and to have gotten p to below 0.05 at 90 minutes (180 minutes on the graph). Of course under an-insulinaemic conditions there is no insulin signalling to facilitate or block, hence the zero to 90 minutes on the graph where metformin has no effect on blood glucose before insulin was bolused.

From Ivor Cummings (not sure where I got the actual paper from) we have this concept:

Insulin is an effective inducer of insulin resistance. Working on the basis that insulin induced insulin resistance is triggered by "excessive" (ie physiologically appropriate to limit nutrient ingress under high calorie availability conditions) levels of superoxide generation then blockade of mtG3Pdh will reduce this "excessive" level of superoxide so defer the onset of insulin induced insulin resistance. This will allow on going utilisation of glucose post meal in the Japanese paper and post insulin bolus in the rodent study.

You just have to wonder whether metformin reduces hunger by blunting insulin signalling at adipocytes, so supplying more calories for the brain to sense or by facilitating the action of insulin within the brain so higher levels of insulin derived from eating absolute crap no longer induce CNS insulin resistance. Maybe both.

Oh, and if you facilitate glucose ingress in to cells when fatty acids are providing an already reduced electron transport chain you will clearly divert pyruvate to lactate rather than having it enter the mitochondria. Glycolysis without pyruvate oxidation gives lactate generation. Just like metformin does... and without needing complex I blockade concentrations. As the Japanese paper commented:

"Post-prandial plasma lactate concentration was significantly increased after the metformin treatment in both healthy subjects and diabetic patients".

Note that the effect was only present under high insulin levels post prandially when the normal physiological response is to shut down excess calorie ingress by inducing insulin resistance. Prevent this response and the calories enter cells as un-needed glucose and exit as "waste" lactate, minimising ATP generation.