The alpha granules of platelets contain many substances which are useful for repairing damaged tissue, especially damaged blood vessels. That's no surprise.

The addition of sulphate to sugar and sugar derived molecules is essential for the production of many glycosaminoglycans. Most of the work with sulphation has centred on cartilage development but an equally interesting location of sulphated GAG production is the arterial wall which leads to the formation of fibrous plaques, via proteoglycans, in stressed areas.

In ancient days of old Salmon and Daughaday (1957 from the look of this title) wanted to assay Growth Hormone. They developed GH deficient rats (better not ask how) then took cartilage samples and added GH to see if they could get sulphate uptake as a method of assaying GH levels in serum, a bioassay. The idea failed and they eventually found out that "Sulphation Factor" was needed for sulphate uptake and SF was produced in response to GH by the liver, GH per se was not active on isolated chondrocytes. To confuse matters further, at some stage SF was re named Somatomedin. To make matters even more confusing somatomedin was even later discovered to be ILGF-1. There is a nice summary of the story here.

Even today we still use ILGF-1 as a surrogate for measuring GH in cats with GH secreting tumours.

So the sulphation of proteoglycans is mediated through ILGF-1. A brief scan (Wiki) of the contents of alpha granules in platelets lists ILGF-1 as the first ingredient. Platelets deliver ILGF-1 to damaged areas. It's not exactly surprising that ILGF-1 promotes proteoglycan sulphation as well as, or as part of, tissue repair.

Human beings are not designed to have fasting insulin levels over 200pmol with a rise of up to 1000pmol (in extreme cases) post prandially. If we do things to ourselves which produce this effect we can expect to have insulin interacting of ILGF-1 receptors which were never designed to see such astronomical insulin levels. Even if their true ligand is at minimal concentration, arterial wall cells will behave as if platelets are delivering ILGF-1 in "damage repairing" amounts. Even in the absence of damage.

It does not take a great leap of faith to suggest that the normal physiological response to normal vascular injury might be driven beyond an appropriate level by chronic hyperinsulinaemia acting on ILGF-1 receptors.

Perhaps type two diabetics should be at increased risk of heart disease? I wonder if anyone has checked this...

BTW anyone who has followed the homocystine hypothesis of CVD will find the title (all I can get) of this paper of some interest.
Posted by Peter at Wednesday, May 12, 2010 14 comments:

As soon as you start to think about arteriosclerosis as a thrombotic, platelet driven process you immediately think about von Willebrand disease (vWD) of course. vWD is a real laugh for a surgeon who makes the diagnosis 10 minutes in to an operation on a young Doberman which won't stop bleeding wherever he cuts it. Giving that NSAID at premed time suddenly seems to have morphed in to a very dumb idea. And the desmopressin seemed too expensive to have on the shelf before today. But I digress.

vWD means your platelets won't stick. Generally this is a Bad Thing.

Similar data were generated by Griggs et al but interpreted somewhat differently. Personally Fuster comes over as by far the more convincing. At least he doesn't inflate a balloon in a coronary artery, then pull on the catheter to induce "arteriosclerosis"!

Happily there is some convergence of opinion, as should happen when both sides are fairly correct and a lot of ifs, buts and maybes are still present in our knowledge base of arteriosclerosis.

So lets look at the micrographs from Fuster. Here's the first set:

These are all taken from normal pigs eating normal crap in a bag. Image A is stained for elastin and was taken from a non damaged area of aorta. Look at the elastin layer. Nice and continuous. Intima is one cell thick.

Image B is from a similar pig but the section is taken through a fibrous plaque. Obviously there's a plaque, which is what Fuster is interested in. But to me there is duplication and fraying of the elastin layer, especially on the left of the picture, but also to the right. Both images A and B are taken at X160 magnification, just eyeball-compare the quality of the elastin in the two areas.

Image C is Sudan IV stained for lipid, so elastin doesn't show. The arrow shows a cell with lipid. There are a few more scattered around but this is certainly not a lipid lesion. It's worth pointing out that platelets are 17% lipid, so some will be floating around from this source.

These next two pictures are from a pig with severe homozygous vWD: 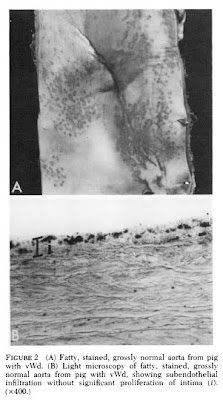 The macroscopic picture is of the fatty areas (Griggs, the rival paper, describes these as "sudanophilia" and implies that they are arteriosclerotic. They're not). The micrograph below in image B is also stained with Sudan IV and shows exactly how shallow this lipid layer is. There is no intimal thickening, no fibrosis and there is absolutely no change in the media below the lesion. At some time I'll have a think about what is going on here, but for the moment let's leave it as non-arteriosclerostic fatty accumulation which does not form an epithelium and does not stop Evans Blue dye from penetrating in to the wall of the aorta.

Finally some fantastic electron micrographs, all from pigs with severe vWD: 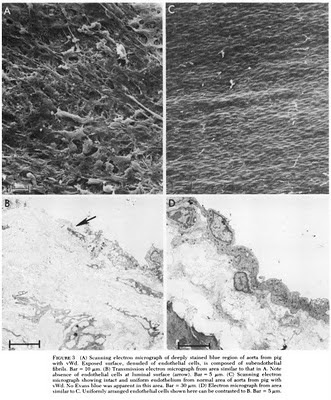 First look at the scanning EM image C. This is a non stressed area of aorta. Nice epithelialised surface. Image A is from a stressed area of aorta which would have developed a fibrous plaque, given a few platelets to cover it, but in vWD this is not going to happen. Rough is not the word. Images B and D are the comparable transmission EMs.

Having vWD is no fun. Endothelial injury is normal. vWD patients bruise all over the place, all the time. These injuries also occur in normal people and are repaired without problem in normal people. Duguid considered atherosclerosis to be pathological and Moon came to the same conclusion. I'm not sure it is that simple. The process which causes arteriosclerosis also keeps us alive. Life saving pathology?

Addendum: Eddie Vos, through THINCS, quoted from this book while I was typing the above post.

From a section describing 49 aortas from monkeys SHOT in the wild,(page 248):

"The small elevated plaques are composed predominantly of smooth muscle cells and elastic tissue and are practically devoid of fats. Thus, the resemblance to human fibrous plaques noted grossly is not borne out microscopically."

My own opinion is that this would be true if all human lesions were lipid based. As many humans develop many small non lipid plaques which sound to be of similar nature to those described in chimps I'm tempted to believe these lesions are normal and physiological. Converting these non lipid plaques to unstable plaques full of linoleic acid and cholesterol crystals is the trick needed to keep cardiologists in business.