TLDR: excess selenium induces excess glutathione peroxidase which blunts physiological superoxide/H2O2 signalling within a cell. This, as you might expect, is a Bad Thing.

I stumbled across this paper quite by accident. It has a number of problems, not least of which is that none of the authors appears to be a native english speaker and this tends to show through. It also carries a rather catastrophic typo/brain fart in the abstract, where TCA, as in tricarboxylic acid cycle, was written out in full as trichloroacetic acid cycle. Ouch. Never the less, they don't seem to like antioxidants.

Over all they don't seem to like suppressing the physiological levels of ROS needed for insulin signalling, certainly while feeding their rats a high carbohydrate diet. Not that they tell us what they fed the rats on!

This is the intraperitoneal glucose tolerance test result, look at "control" and "Se" for the effect of the high selenium diet: 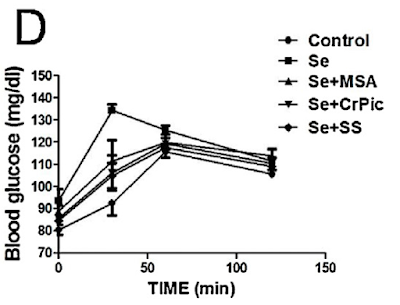 Among many of the problems with the paper another is the difficulty distinguishing which line is which on the graphs. I think we can say the top line is clearly the selenium supplemented group and the bottom line is probably the control group. The main effect is at the 30 minute mark. This suggests to me that there is an inadequate first phase insulin response (needing ROS from RET induced by mtG3Pdh) to overcome the systemic failure of insulin action (also needing ROS from RET via mtG3Pdh to diffuse as far as the insulin receptor). By 60 minutes the difference is negligible. Had they measured insulin I'd bet the second phase response was exaggerated. 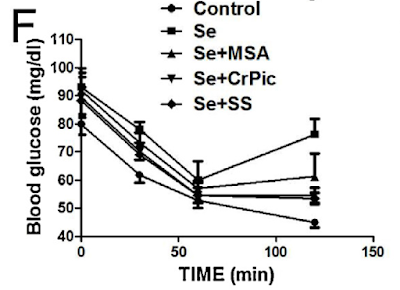 This time the bottom line is clearly the control group, top line the selenium treated group. From the control group I see no suggestion that this particular dose of insulin is inducing insulin-induced insulin resistance, so all we see is the failure of the insulin signalling activating action of ROS at the two hour mark. Note the lines are all parallel until the one hour mark. This is what suggests that there is nothing wrong with insulin action per se at the 30 minute mark and is another factor which makes me suspect that there is a failure to secrete insulin during the early stages of the IPGTT. The normal response to exogenous insulin, up until one hour mark, occurs while ever the exogenous insulin can overcome the loss of ROS caused by the glutathione peroxidase excess induced by the high selenium diet.

As humans we deal with huge numbers of xenobiotic antioxidants, mostly from plants. For the vast majority we can simply use our liver and/or kidneys to dump them to where they can do us no harm. Just occasionally we fail, as with selenium. The end result is not pretty.

Peter
There are some more interesting finings in the paper which might be worth chatting about. Maybe another day.

Random throw-away thought: Is this how uric acid induces insulin resistance? By being too good an antioxidant???? Hmmmmmm.
Posted by Peter at Tuesday, October 30, 2018 11 comments:

This is another very abstracted study using isolated mouse islets in cell culture to assess the effect of metformin on insulin secretion. 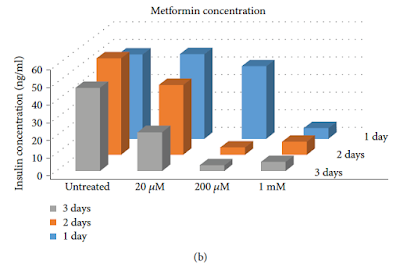 Any findings in the paper using concentrations of 200micromolar or higher can safely be ignored for therapeutic relevance. Except for the confirmation that cells die rather well at 1.0mmol of metformin and are doing rather more apoptosis than you might like at 200micromolar (see Figure 3 in the paper). No surprises there.

Also consider that picking up subtleties of insulin secretion by measuring the concentration in a culture well is a very blunt instrument. But at least they are looking.

So why doesn't metformin cause diabetes on the sort of criminal (up until very recently) diet advised by any diabetologist?

This is partly because the redox changes in the liver suppress gluconeogenesis, though the exact mechanism by which blockade of mtG3Pdh suppresses hepatic glucose production is debatable.

It's also because, certainly in peripheral cells suffering from chronic hyperinsulinaemia-induced lipotoxicity, cessation or reduction of insulin signalling will allow release of fatty acids able to generate their own RET via the oxidation of beta oxidation derived electron transporting flavoprotein at mtETFdh of the electron transport chain and so restore insulin signalling. Or, if there is enough superoxide, insulin resistance. So cells suddenly realise they have a great supply of FFAs, adequate ATP generation and no need for any more caloric ingress. Which generalises to the whole organism as a "no need to eat" state, which might just give weight loss. As metformin does.

Actually metformin might do the same to lipid in the pancreas as it does in peripheral tissues. Loss of accumulated pancreatic lipid is what people like Dr Roy Taylor consider the mechanism by which the hypoinsulinaemia of semi-starvation induces some degree of remission of diabetes, in a few patients, while they can stick to it.
Posted by Peter at Sunday, October 21, 2018 14 comments: Obviously most of the diagram shows the Good Things which activating AMPK does. There appear to be three core activating signals; changes in Ca2+ via calmodulin, increasing cyclic AMP and that change in AMP+ADP:ATP triggered by exercise, low glucose, hypoxia and severely toxic doses of metformin. Here they are emphasised in blue: 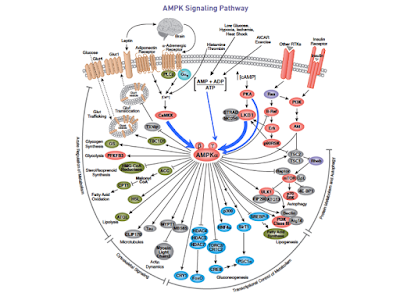 There is only one inhibitory input shown, I've marked it in red: 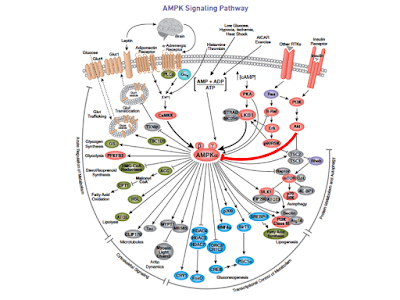 When you follow this input back you end up with the one factor which suppresses AMPK signalling. 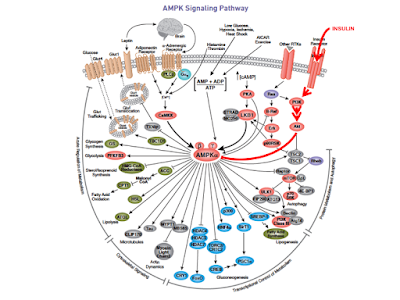 We know that metformin inhibits mtG3Pdh at normal pharmacological concentrations. From the Protons perspective this blocks the generation of the ROS essential for insulin signaling. No insulin signalling, no inhibition of AMPK. Which nicely fits in with this paper:

Of course metformin inhibits complex I (which drops ATP and so activates AMPK) at concentrations which put you in to the ITU with lactic acidosis, around 200micromolar in plasma. Recall this? 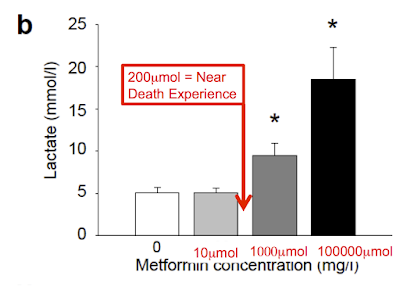 It also activates AMPK via inhibition of AMP-deaminase using tissue culture exposure of 10mmolar. That's 10,000micromolar, which would probably put you in to the morgue rather than the ITU.

A quick reality check suggests that taking one 500mg metformin tablet an hour before a bike race might just help you win... Somehow I don't think blockade of complex I would do that! Freeing up fatty acids by dumping insulin signalling might just do the job.