So you want some DHA? Chickens in Norway

Again via twitter, Tucker retweeted a thread which included the link to this paper
Increased EPA levels in serum phospholipids of humans after four weeks daily ingestion of one portion chicken fed linseed and rapeseed oil
Over the years I keep coming back to this plot 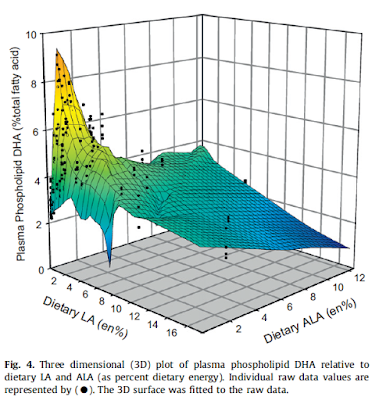 which comes from another paper:
Docosahexaenoic acid synthesis from alpha-linolenic acid is inhibited by diets high in polyunsaturated fatty acids
It shows, very clearly, that in rats both linoleic acid and alpha linolenic acids are equally efficacious at suppressing the conversion of ALA to DHA. Given 1% of energy in the diet as ALA then copious amounts of DHA are produced, just so long as the LA proportion of calories is less than 2% of the total. Never mind the ratio. Avoiding PUFA will generate DHA from ALA provided a basic minute minimum of ALA is present in the diet, somewhere around 1% of calories. Over at the right hand side of the plot we can see that even drinking 12% of your energy intake as ALA will not generate significant DHA if you are up in the cardiological nirvana of 16% of energy as LA.
That is in rats.
Chickens superficially appear to be somewhat different.
Switching from soybean oil to a rapeseed/linseed oil mix in the diet increases DHA in the breast meat. Soybean oil gives 14% of lipid as DHA, rapeseed/linseed gives 21%. Of not very much fat in breast meat so the amounts are small in total, but still highly statistically significant.
So ALA in food bumps up DHA in muscle. Of chickens.
This is what the chicken diet looked like, with annotation to give the fat percentage of total calories and the LA and ALA percentages of total calories in the diet, crudely: 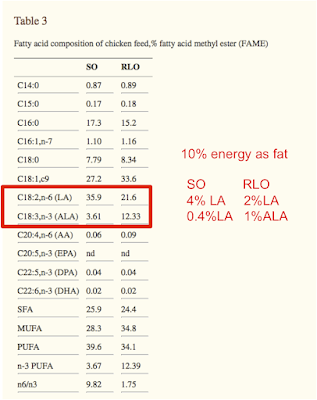 We can overlay the chicken diet very approximately, on the rat plot to get this: 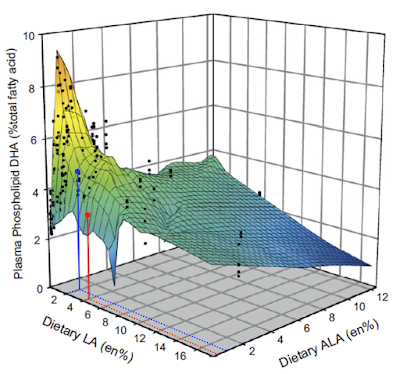 which, not surprisingly, suggests that the DHA production in the "high" ALA diet (blue) is actually more influenced by the reduction in LA. At 4% LA we could equally have had ALA at 1% of calories and still got a lower value for DHA than we did by having LA down at 2% of calories.
Might this work for humans too? Could adding ALA to our diet improve DHA availability, with all of what that entails for improved brain development and cognitive function. Just by avoiding LA and maybe drinking a little (traditional) varnish? The study didn't ask this. Instead they fed the above chicken to some humans. Either omega 3 enriched or omega 6 enriched.
This actually dropped DHA in the participants' plasma phospholipids in both groups. Admittedly not by much, so the change was neither statistically nor biologically significant. But it dropped. I would hazard a guess that the chicken simply displaced a richer source of ready-formed DHA from the diet, the tiny amount in the breast meat would do nothing per se. I believe Norwegians consume a certain amount of fish, unless they're given free chicken to eat.
The rise in EPA must have made the authors happy that something positive came from all of that work. But I don't think you can build a brain out of EPA, DHA looks to be the molecule for that.
Ultimately pre-formed DHA does not look to be necessary for brain development if you have a modest supply of ALA from (grass fed, possibly large) animals and avoid consuming significant amounts of LA. This appears to hold true for rats, chickens and I expect for humans.
Peter
Posted by Peter at Saturday, January 22, 2022 11 comments:

Labels: So you want some DHA? Chickens in Norway

This is just a "post" to allow comments between people interested in the current COVID saga more easily. Comments on all posts older than two weeks are to be moderated by myself, just to keep the spam under control. So here are two weeks of unmoderated commenting scope if people want to exchange comments if I'm off working or weekending with the kids.

There you go Eric. Good idea.

Okay. I hope everyone has heard this podcast with Raphi chatting to Tucker and Amber:
I feel Amber articulated the adipo-centric view rather well. The whole podcast reminded me of a few ideas I've had kicking around for ages and it might now be time to do a bit more posting.
I was taken back to good old Rimonabant by some of Tucker's points. It got a passing mention in an old blog post back in 2010. I may not have been terribly impressed at the time.

For those of us with an adipocentric/insulin based outlook on life Rimonabant is interesting. It takes about 30 seconds on PubMed to pull out
The CB1 endocannabinoid system modulates adipocyte insulin sensitivity
CB1 agonists make adipocytes insulin sensitive. Rimonabant blocks this effect, which made me feel good about Protons/insulin/obesity and I left the subject alone in a nice glow of confirmation bias for a few months.
But these are isolated cells, does anything like this happen in real life? I would expect Rimonabant -> adipocytes -> reduced insulin signalling   -> release of free fatty acids -> weight loss -> reduced appetite.
In that order.
Central to this is that the brain senses energy availability (Amber cited work I'd never heard of, my own ideas are just ideas. I felt it was self evident. You could say I just made it up) and reduces appetite when energy availability is good. Rimonabant frees up calories from adipocytes. But it is nasty stuff in the brain.
Developing drugs which do not pass the blood brain barrier is old hat in anaesthesia. Doing the same for CB1 receptor blockers seems pretty simple too. Just imagine, all the weight loss, none of the suicidal ideation. There are several under development.
But peripheral CB1 blocking drugs hit all sorts of targets ranging from the gut through the liver to the vagus nerve. And adipocytes.
What would an adipo-centrist look for?
Obviously we want an adipocyte specific CB1 receptor knockout mouse. It just has to dawn on you that that is what you want. Which took a while in my case.
So another 30 seconds on PubMed gave me this one:

and a little wander to the Place-which-shall-not-be-named gets you the full text.
They built a mouse model with a tamoxifen trigger-able deletion of the CB1 gene, specifically in adipocytes. How the hell they do that I can't follow but it's in the methods with links (not followed by me this time I'm afraid). I just have to accept that they can do it and that the technique is very, very clever. Then they fed a German high fat, high linoleic acid diet (around 10% calories from LA, ballpark) to make the mice fat over several months, leading to the start point at week 17 of graph E below. Then they injected tamoxifen daily for 10 days to induce permanent deletion of the CB1 receptor gene in adipocytes only. Here's what happened to the weights.
Black squares are fat mice which keep their CB1 receptors. Open squares are fat mice which lose them. D Both diamonds are controls:

Nothing changes in the gut. Nothing changes in the liver. Nothing changes in the brain. The hypothalamic Reward™ dopaminergic neurons are left untouched. All that happens is that adipocytes lose (at least) the insulin sensitising effect of CB1 receptor activation. Weight completely normalises in less than a month. It's also worth noting that in control mice adipocyte CB1 gene deletion does nothing.
Ultimately the adipo-centric view has phenomenal explanatory power when backed up by the insulin ROS concept. Everything else is higher level signalling and unexciting to me.
There are other interesting things in the paper relating to food intake and uncoupling (ie the rapid weight normalisation occurred without reduction in food intake) but I'll call it a day for now. Except to mention that in human victims of Rimonabant it is well recognised weight loss is greater than can be accounted for by reduction in food intake. Fascinating.
At some time I'll drag myself back to working out the F:N ratio of mixed fats. Two different butters, two lards, one plus 5% soybean oil, done so far. Still got coconut oil and fully hydrogenated coconut oil to go. Losing the will to live. 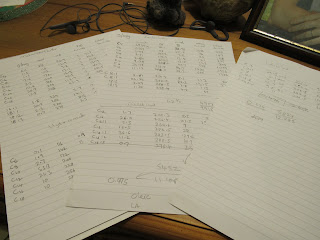 Perhaps I should ask my son to write me a bit of software to do this!
Peter
Posted by Peter at Wednesday, January 12, 2022 10 comments: