More from the Lugalawa study in Tanzania.

We all get two copies of any particular gene, one from our mother and one from our father. The gene coding for the number of kringle IV repeats on apo(a) is exactly like this. Some people get apo(a) of the same size from both parents, others get a pair of different apo(a)s, one size from each parent.

If you are trying to compare the effect of apo(a) size on Lp(a) concentration, and the confounding effects of diet, it would be really helpful to have everyone in the study with just one size of apo(a) each. They're not actually that rare and in the Bantu study Pauletto found quite a number of individuals with only one apo(a) size who could be pair matched with someone similar from the neighbouring village.

The effect is shown here in Table 2 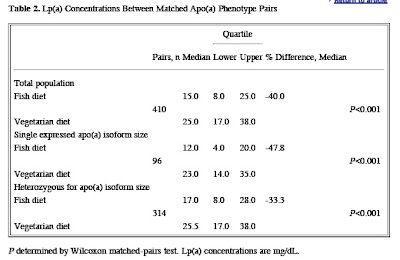 Just in case the table is not 100% clear on a casual glance (it wasn't to me!!) here is the section we need, just copied from the middle section of the table.

We can see that the median in the fishermen is half that of the vegetarians with a p value < 0.001

Just imagine a drug had been found to halve Lp(a) level. Eric Topol would wet himself!

But it gets more interesting. Pauletto went on to plot isoform size against Lp(a) concentration. Here are the data from the matched apo(a) size: 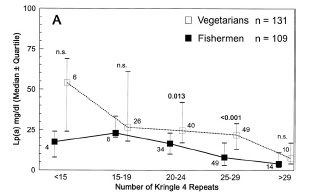 Look especially at apo(a) with less than 15 kringle IV repeats. Lp(a) is 55mg/dl in the vegetarians and less than 20 in the fishermen. Same genes. Now this is not statistically significant, but that comes from trying to compare 6 farmers with 4 fishermen!

So Pauletto cheated a little to bump his numbers up and went on to do the same plot but included anyone with more than 85% of their expressed apo(a) size in a given bracket. This gave more people and significant p values across all ranges. 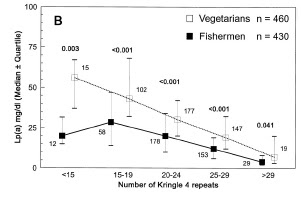 I don't find the differences very biologically convincing at the right hand end of the plot with the long apo(a) kringle IV repeats. With long apo(a) you can eat what you like and still have low Lp(a), within these cultures. But it seems likely, if you believe Lp(a) furs up arteries, that the short apo(a) repeat farmers are in a lot more trouble than the similarly gifted fishermen... Lp(a) 60mg/dl vs 20mg/dl.

But it gets worse for the farmers! They are significantly more likely as a group to have short form apo(a). Here is the isoform distribution between the groups: 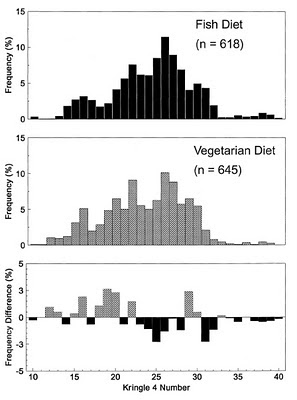 The bottom section clearly shows that the vegetarian farmers are more likely to have killer apo(a) isoforms, as well as making more Lp(a) than they should for a given apo(a) size. A double whammy.

Why should this be?

Pauletto thinks it's a founder effect:


This seems implausible to me. Founder effects would certainly be likely to persist in isolated populations but these populations intermarry commonly.

What seems far more likely is that there is an on-going positive selection pressure for short apo(a) isoforms in the vegetarian farmers. Intermarriage dilutes this effect but doesn't eliminate it. Of course you could argue the converse, that fishermen are selected to have longer apo(a) isoforms but this seems less likely when you consider what Lp(a) might actually be doing, other than keeping Eric Topol off of the streets.

You have to ask whether the farmers benefit from high Lp(a) levels.

What does Lp(a) actually do (or what are the ideas floating around for what it does)?

My guess is that we'll find a correlation with protein-variant conferring an advantage to the farmers (some othe protein bound to the component with the short Kringle repeats). 1 mutation expressed with differing results across various cell specialties.

Maybe the short apo(a) repeat population grew to a certain (relatively large) size from the original founders before intermarriage started, which would explain the maintenance of a certain amount of genetic divergence.

If there had been on-going positive selection pressure for short apo(a) isoforms, wouldn’t you expect a larger number of farmers possessing them? The number of genotype holders seems to go down as kringle 4 number goes down.

I am unable to find this topic addressed, so will piggyback it onto this post: PLEASE discuss the mutations in the SLCO1B1 gene; there are 2 neighboring mutations noted to be prevalent in individuals sufferring severe myalgias and myopathies while on statin therapy.
the following dissertation if instructive:
https://oa.doria.fi/bitstream/handle/10024/42771/pharmaco.pdf?sequence=1

Perhaps all the adverse effects from statins occur in individuals with either of these 2 mutation. the prevalence is lower in africans americans and much higher in asians (remember the J-Lit study?)

Hi Vennam, yes maybe but not yet...

Hi Ned, I'd expect the intermarriage to keep the effect in check, but I don't really have a handle on numbers or timesacle for this sort of effect.

Interesting. Possibly why the Japanese die of heart disease on statins (it's a muscle) and Americans die of cancer? The link is a whole thesis, gulp! Some reading to look through there. In my understanding there is essentially no end to the adverse effects of statins and myopathies are a tip to the iceberg. The fact that they either hurt so much that you stop the meds or they kill you are the reason they are well accepted. But the total list is endless.

Maybe the high Lp(a) is protective against childhood mortality from infectious disease?