All of these images are taken from Dr John Duguid's monograph The Dynamics of Arterisclerosis. I'm not sure they are available elsewhere, so here come some horrible copyright infringements.

Duguid never uses the term mucopolysaccharide or GAGs, but it is pretty clear from the pictures that this is what the hyaline substance in Duguid's rabbit images represents. The body replaces the fibrin of blood clots with GAG, as it does in the healing process of fractures. Oddly enough the parallel goes on to calcification too but I think I might be stretching a point there...

Please bear in mind that the pulmonary emboli are a model. They are not arteriosclerosis, but just look at the vascular wall changes over the months after embolisation. Obviously they are in the pulmonary artery as this is where all emboli from peripheral veins end up!

Duguid has a whole series of picture of microthrombi in human arterial sections which produce similar changes to the model but in minute amounts. Hence in the previous post the clot over the frayed elastic membrane does not look like the large fibrin particle in the rabbit artery here.

Just for a giggle I've also included two of his images of the cholesterol fed rabbit. Classic.

The titles are self explanatory. The fibrin clot is huge and it's the lump on the lower left side in the lumen of the artery. The paler granular stuff is just blood in the artery. All of the stains are H and E and don't show elastin (not needed as the model does not use intimal trauma to produce the clots). 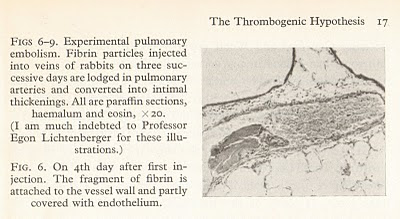 We now know that circulating endothelial progenitor cells rapidly coat thrombi, or other nasties (like foam cells), so finding a covering by six days is not surprising.

By two months the lesion is looking more like a typical childhood arteriosclerosis lesion:

By six months the lesions do look quite like the mature lesions seen in young children:

I would suggest that there is still a lump of what is probably GAG, but the bulk of the lesion (bottom of the section) is mostly just fibrous thickened intima.

It would have been lovely to have Prussian Blue stained sections and Sudan Red sections to confirm the presence of GAG and the near absence of cholesterol, but you don't get what's not in the book.

Don't forget this is a model! 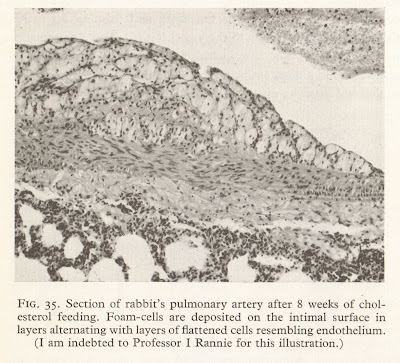 All of the bubbly stuff is cholesterol. There is no GAG, there is no fibrin. EPCs coat these foam cells as well as they do fibrin clots, hence the layers of epithelial cells between the foam cells.

And, if your rabbit survives long enough, what does its aorta look like? Here's one (on the left) I prepared earlier: 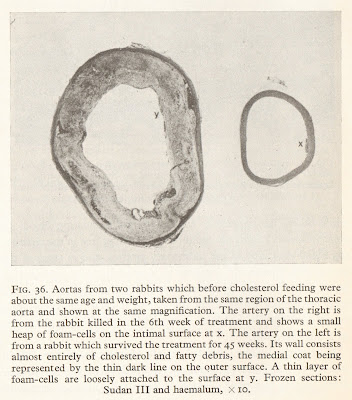 Duguid does say quite explicitly that this particular rabbit was an exceptional example. Perhaps it has FH as well as cholesterol poisoning!

Now, did this rabbit die of a heart attack?

Too bad they didn't NMR those rabbits, they might've had genetic sdLDL, too.