Axen and Axen (4) Ketogenic insulin resistance. It's all over now...

I have so many posts I want to get finished, all of which are inter-related and all of which need waaaaaay too much work, that I thought I would just throw this one out in the interim. I began with this paper which came as a pdf from Liz. While I was getting the pubmed link to it I noticed the same group had another rather similar paper out which was equally interesting and then the third link down the page was an accidental find which is this one, subject of this post.

I don't know if it's worth going through the figures individually, they are very similar to those from Axen and Axen which produced a series of posts a few years ago, except that the feature of COMPLETE reversal of insulin resistance is, here, presented right up front in Figure 6 and in the abstract too: 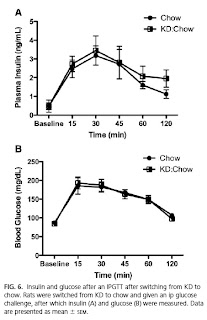 That figure for insulin looks a little dubious at 120 minutes but I'll let that go, I guess p was still > than 0.05... Pretty close to full reversal.

It's quite hard to know exactly how much this group understand about their results. They give roughly equal weight to the adverse (sic) effects of a ketogenic diet as they do to the fact it is reversible within a week (or less, they only checked at a week) of re-introducing carbohydrate.

What they seem to lack is the concept that rats fed a very restricted carbohydrate diet MUST be insulin resistant to survive, as happens in starvation. But maybe they are creeping towards some sort of understanding. It's about time. Good.

When people cite Axen and Axen to prove ketogenic diets are going to make you diabetic (there are folks who believe this, or at least wish you to believe it!) you have an answer in Kinzig et al 2010.

BTW, the links which led me here relate to using ketogenic diets to control both pain and inflammation. This is a potentially very useful tool but the beneficial effect does appear to be as rapidly reversible as the physiological insulin resistance... Ketogenic diets are a fix, not a cure (in the short term anyway). But inflammation appears to be a feature of ageing, long term, and if KDs work in "ageing inflammation" all we have to decide is the age at which we should all start on a KD. Unless someone has a method of stopping the ageing process of course....

Labels: Axen and Axen (4) Ketogenic insulin resistance. It's all over now...

Thank you for posting on this topic, it is very necessary. Great conclusions, again!
I am looking forward to future posts.

This is related but a little different:

So I wonder how a diet rich in coconut fat fits into some of this. You get a lower F:N ratio but more ketones and less PUFA (all else equal). Ketones themselves of course don't correlate well to some of the diet's effects, but esters are often effective, so..

There's an interesting keto paper that compares MCT to butter to flax for seizure control, and there are other measurements too: weight, organ weights, blood lipids, brain cholesterol, etc.

I personally feel as though sympathetic tone is higher with lots of coconut milk, but there are other things to consider [besides fats] like salicylates perhaps.

When I read the classic Steffanson all-meat diet paper a while ago, one thing stuck with me.
Here you have two people in ketosis for 2 years (I think), a long time anyway. It ends with a glucose tolerance test (or is interrupted by one maybe) of 100g glucose.
Steffanson copes OK but his buddy (the 2 have been disease free all this time) falls sick with a virus (I think). The docs say it's just co-incidence.
Uh-Uh. It's glucose.

Last August four physicians of the Russell Sage Institute at Bellevue Hospital, New York, announced after three months deliberation that Vilhjalmur Stefansson and Karsten Anderson, Arctic explorers, had not harmed themselves by living on an all-meat diet for one year and ten days. Said the physicians: "In general, white men, after they have become accustomed to the omission of other foods from their diet, may subsist on an exclusive meat diet in a temperate climate without damage to health or efficiency." Said Meat-Eater Stefansson: "I am wide awake and am more aggressive in my work than I was before I started..."


Also see this - pretty amazing; Owsley "The Bear" Stanley was a zero-carber and scientific carnivore; I never knew.
http://blog.zeroinginonhealth.com/2011/03/13/zc-icon-dies-in-car-crash/

@GH, Woe, poor Andersen! well, at least he survived! Apparently the flu was deadly and highly prevalent at the time - 50% of the people with it died.

@George - Here's nearly everything The Bear ever wrote online, amazing bloke, this will keep you entertained for days/weeks: http://highsteaks.com/carnivores-creed/owsley-the-bear-stanley/bears-words-of-wisdom/

Thanks Ash!
Here we have an interesting effect of glucose/insulin: methylation, vs trans-sulfuration for carb restriction.
http://www.ncbi.nlm.nih.gov/pubmed/19088160

John, the increased SNS you associate with coconut milk is likely secondary to thyroid augmentation noted effect of coconut oil/MCT.

I have instant hyperthyroid like burst when taking MCTs. Heart palpitations, excessive energy...but very short lived for me and often seems to provoke reactive hypoglycemia. Which is why I avoid coconut.

George, the bear!!! He was on the ALC forums and he was kook for sure ; attracted quite a following rather like kruse. When I first encountered the bear I had no idea of his acid fueled "famous" past

Woo, George and all,

Which looks like a recipe for acute hypoglycaemia to me and a simple SNS response might be appropriate to raise glucose. Am I being to simplistic here?

Under starvation/LC the effect might well be offset by a combination of hypoinsulinaemia and elevated long chain saturated FFAs, especially palmitate. Not so after coconut ingestion.

The flip side is that, certainly in rats, there is a period of hyperinsulinaemia after MCT gavage. But is this from the MCT or the SNS response?

Any thoughts appreciated. I've been meaning to look in this direction for ages but there is too much else to get through...

Interesting, especially that stress induced analgesia was not impaired and persisted for longer under ketosis. Filed under "keep in mind".

Analgesia research is a very difficult field! I have been berated by analgesia researchers, very nicely, usually in the bar, for my crude clinical approach. I poke the wound. If patient objects, I give morphine. I have a simple switch, do I press the plunger or not? We do run Glasgow pain scores too, but the poke decides, if in doubt! Not so good for mean +/- SD and, probably, I will be overdosing. So be it!

Analgesia and inflammation seem connected in several threads of research.

Several of the antidepressants are used for pain control - and they reduce inflammatory markers. Depression itself can be looked at as a low pain threshold. I suspect that a subset of depression is actually a physical disease.

Ketamine reduces post surgery inflammation and there is now research using it very low dose as an antidepressant ( it apparently works very fast and better than the drugs on patent - but some people get strange side-effects and the fact that it is off patent and was once a popular street drug means it is unlikely to be approved by any of the corrupt governments we live under. )

Low carb diets are also known to reduce inflammatory markers so these papers don't seem surprising to me.

There is some speculation that the increased consumption of O-6 PUFAs is responsible for the increase in people seeking help for depression - but I don't think there is any way to prove this with epidemiological data.

There is also a thread that fish-oil reduces both depression and inflammation. There is this paper tthat suggest use for pain management (not that I have any interest in a meta study )

When my girlfriend broke 2 bones in her leg they gave her ketamine while they reset it. It worked perfectly and afterwards she had no memory of anything but the spaceship.

Karl, most opioids (and alcohol) are TLR4 agonists, this is the LPS receptor and this activity is responsible for pro-inflammatory side effects such as gliosis.
Naltrexone and some antidepressants are TLR4 antagonists: I blogged about it here http://hopefulgeranium.blogspot.co.nz/2013/03/our-first-song-for-today-is.html
People are trying to work out how to block this TLR4 effect, which can produce tolerance and hyperalgesia with prolonged exposure to opioids. It's a fairly recent discovery but ought to result in better drugs.

After continuing for a few days the effect seems to go away. Coconut oil has a reputation for being pro-thyroid, but I don't know any evidence that actually shows increased production/clearance, but it usually lowers body fat.

My main source of coconut fat is milk/cream, since it's easier to base a meal around than oil, and it's a decent source of many minerals.

Anyway, I wonder what would be the effect after an extended period of time; my skin seems smoother after only about 5 days or so. I discontinue because the taste gets a little tiring.

Just for observation, there is a 1970s video of Tokelauns, but I am unsure as to how traditional their diet was then.

I'm glad you understand and address this.

It was frustrating watching Nora Gedgaudas stumped by this question (by one of her fans) [26:24].

And yet, at 25:45 into the same video, answering a question from another caller, she described the effects of this temporary increase in insulin resistance perfectly.

So that was confusing.

Are you diabetic? Just curious because that seems to be the common thread of most of your posts. My son is Type-1 diabetic, is why I'm asking.

My son is Type-1 diabetic. I was just wondering if you are too. Seems to be a common theme.