Trying to work out exactly what is happening in a given functional component of the inner mitochondrial membrane is not the most simple of undertakings. For anyone who wishes to bend their brain a little you could do worse than working through Federenko's paper on the likely structure/function of UCP1 in brown adipose tissue. I think the original pdf was sent to me by Alex, some time ago. Although it is looking at UCP1 I think we can reasonably assume other UCPs work in much the same manner. This set of line doodles summarises the paper:


All nice and simple, compared to how complex it was to work all of this out. In plain English: The (removable) fatty acid flip-flops back and forth, passing a proton each time. UCPs absolutely MUST have access to long chain fatty acids to function. The LCFAs must be free, ie NOT be activated. Sticking a large CoA moiety on to the red dot (which is the carboxylic end of the LCFA) will completely inhibit any activity in UCP1 as there is then no negatively charged binding site on the fatty acid to allow it to ferry protons, repeatedly, down their concentration gradient back in to the mitochondrial matrix.

So fatty acids may just be slightly important to uncoupling. Uncoupling may be a Good Thing or the converse, depending on your point of view or your carbohydrate intake.

This leads us on to Curi's group and their 2006 attempt to look for the effect of FFAs on uncoupling in tissue culture, in isolated mitochondria and even in whole live rats. When you see a line in the methods which specifically states "in Krebs–Ringer bicarbonate buffer containing 5.6 mM glucose" you know you are in for a treat. You have to have read as much cell culture literature as I have to realise how precious a line like this is. All you normally get is the type of medium, probably the brand name and the supplier, but oops, forgot to mention it has, or might have, or might not have, 25mmol of glucose in it. Or some other random amount. Duh. The easy way to tell (when not specified) is that if saturated fats cause apoptosis in cell culture, be certain that glucose is >20mmol. 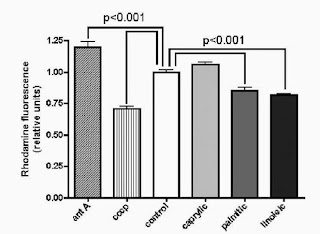 This is from first generation harvested and cultured skeletal muscle cells. The fluorescence rises with inner mitochondrial membrane potential, delta psi. Antimycin A blocks ATPase so hyperpolarises the membrane, CCCP is a chemical uncoupler and so reduces it. These are just tests to show the prep works. The caprylic acid is useless (it works well on isolate mitochondria but the cytoplasm probably stops MCTs reaching the mitochondria without adding CoA while they are on their way there). Palmitic acid and linoleic acid uncouple, like a mild version of CCCP. 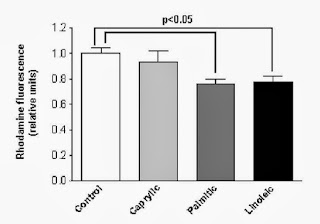 You can show exactly the same effect in chronically cultured myotubules, just another cellular prep. 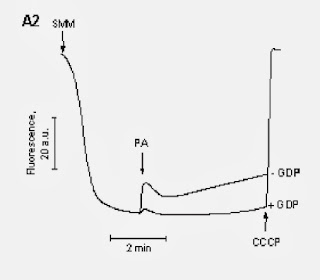 This is our first look at isolated mitochondria. This is a graph of the same delta psi sensitive fluorescent dye plotted against time. The graph is upside down because, in real life, delta psi is negative. You add SMM (skeletal muscle mitochondria) to the observation medium. They fire up and delta psi increases. This is the curve dropping downwards from the SMM arrow. In the middle of the 2 minute bar, palmitic acid is added and delta psi decreases (upward flick in the upside down graph) marked by the PA arrow. The bottom line is what happens if you have added guanidine di phosphate, GDP, an inhibitor of UCPs. At the end they also added CCCP to fully uncouple the mitochondrial membrane and show that delta psi collapses.

And this graph is looking at the rise in oxygen consumption induced by uncoupling using assorted fatty acids. Again, mitochondria, so caprylic acid works, though never as well as the longer fatty acids. Note the lack of GDP effect, the CoQ couple must be reduced in this prep. BSA (bovine serum albumin) eliminates the uncoupling as it "hoovers-up" all available FFAs.

Does this uncoupling happen in intact animals? Yes. A stack of caveats, but yes. Ratties were bolused with intravenous palmitate or alcohol (As the control??!!?? Alcohol is not inert, even if it doesn't uncouple) and then oxygen consumption was measured: 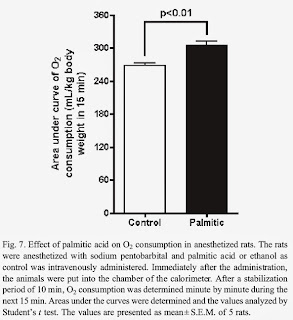 Right, that will do for now. The plan is to look at FFAs and insulin resistance next, within this framework.

Peter as you may or may not know I've discovered my fasting ketosis is highly variable and seems most reactive to dietary fat content. Likely this would not be an issue if I was on a more strict protocol with less protein and less carb, but for health/wellness reasons I prefer to keep protein higher around 70-80 most days and my carbs are moderately restricted at 30 net.

Now I am *always* in ketosis following this diet, however, my fasting ketosis is only trace when I consume enough dietary fats (usually in form of dairy or nuts). If I eat the same amount of protein and carb but restrict fats to a slight deficit, my fasting ketosis is moderate (dark) and I lose body fat quite obviously.

I am quite certain I am in ketosis throughout (my urine is also quite dilute, nice TMI there, so even trace ketosis likely represents significant ketogenesis, whereas the darker levels represent an even more enhanced ketosis).

My posptrandial ketosis is stronger on high cal diet, so it's not an issue of being "in ketosis", it seems more to be a combination of the fact I very very very easily gain body fat (duh, quite weight reduced/hypotrophic adipose) and the high fat/cal ketogenic diet -> higher fasting insulin -> body fat retention/gain.


Emotionally I feel better losing wt as well with stronger emotional ketosis symptoms (I follow ketogenic diet for mood benefits primarily) so there is no downside for me to losing wt. I think this is backbone of why I always crave to diet - a higher calorie keto diet does not make me feel as good as a slight neg energy one (at least, until the effects of stress response destabilize my mood and health e.g. progressive insomnia and activation).

I have definitely noticed animal fat/ SFA seem to promote stronger fasting ketosis and greater energy. I suspect if I alter diet so that most fats are coming from this source (and not dairy) I would find it much easier to maintain ketosis as well as weight.

However reducing fat content of diet and simply using my fat tissue for energy necessitating drop in insulin level seems to be best way to initiate a stronger fasting ketosis for me at this point.

When I was actually overweight with highly IR fat tissue / hypertrophic adipocyte, this would all be non issue; fasting ketosis was easy and quite strong just via carb restriction. I think leptin figures in a lot too (leptin facilitates body fat oxidation in numerous ways, and at lower weight with lower leptin is harder to maintain fasting ketosis).


I've decided fasting ketosis is most specific for insulin levels and weight loss, all other ketosis is not that important at all.


This is kind of off topic I know, sorry!

The title produced this thought:

Hi Woo, I think you are correct. I suspect very high calories ketogenic eating can raise fasting insulin, although 24/7 insulin exposure will be reduced compared to eating CIAB style. It strikes me as possible that low carb, rather than zero carb, might result in lowest insulin exposure. But ketosis for mood control is another ball game and probably comes with its own trade offs. Sanity is a marked up-side.

My fasting ketones are one plus and spike after my main meal. Simply a ton of fat per unit carbs, nothing to do with weight loss immediately post prandially...

I can't remember if I've posted this elsewhere, but it's a very informative resource when it comes to the issue of glucose levels in cell culture
http://www.sigmaaldrich.com/life-science/cell-culture/learning-center/media-expert/glucose.html

And, golly gosh, try launching the (culture) Media Expert by clicking on the upper right icon, some real goodies in that.
I finally learned the basis of pyridoxine toxicity there. Non-enzymatic Schiff base reactions denaturing proteins, of course.
So obvious once one knows...

Several bits that start with treatment of epilepsia have been published - and the suggestion has been made that manic-depression is closely related - the question I don't see a good answer to is this positive effect due to ketogenic diets reduction of inflammation ( think TNF CRP - inflammatory interleukins ) or by some quite different mechanism.

Tying this back to Peters post - CQ10 supplements send a portion of the population into sever brain fog. (I think I just lost my coffee mug again ... )