I thought I might just put this snippet up as it's been lying around ready to go for some time. I've tried to tidy up some of the worst sentences. Happy Solstice! Here we go.

Back when talking about the Pima paper I skipped over insulin induced thermogenesis, a fascinating subject and a phenomenon distinctly lacking in the obese, if they are insulin resistant. This is the pattern of IIT, from normal glucose tolerance through to diabetes. From Fig 2: 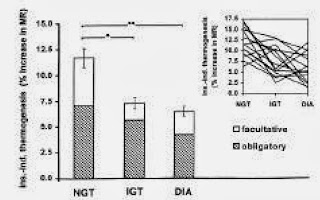 The phrase "insulin induced thermogenesis" is, at first glance, a complete oxymoron. It is difficult to imagine any way in which insulin, that most effective suppressor of free fatty acids, might uncouple respiration to generate heat. The primary brown adipose tissue technique is to use UCP1, which depends on free fatty acid availability. But there are other ways to generate heat in addition to uncoupling the proton gradient. It is worth noting that some of the thermogenesis is "obligatory", by which the authors mean the exothermic storage of glucose as glycogen. I'm rather more interested in the "facultative" component.

Brand's group have been hard at work again and have this (excellent) paper out:

most especially the lovely figure 1 (use the link to get the legend, it's a good summary of ETC energetics and "non-stressed" superoxide production):

It is an abstraction of the ETC, grouping inputs by their redox potential rather than physical location and is now becoming pretty inclusive for most electron donors. All mitochondrial NADH inputs are through complex I at -280mV and these electrons flow from here towards the positive potential of +600mV, provided by oxygen at complex IV. They do work in the process, pumping protons to set up the delta psi which can be "wasted" to generate heat when needed. Without uncoupling, the process is efficient and energy from the electron is largely conserved.

The interesting point is that mtG3Pdh inputs to the CoQ couple which has, we can now see, a redox potential of +20mV.

Specifically, mtG3Pdh is taking a cytoplasmic NADH, which could theoretically be shuttled to the mitochondrial matrix, and hence to complex I, at -280mV, and inputting it to the ETC at +20mV. The energy lost by skipping from -280mV to +20mV would normally pump four protons and now appears as heat.

After a glucose load any oxidation of the abnormally elevated FFAs of insulin resistant people still provides a continuous +20mV input using ETF dehydrogenase's FADH2 acting on the CoQ couple, which is ultimately derived from the FADH2 of the first step of beta oxidation, ie it's FADH2 transporting electrons all the way, there is no energy wastage when using fats to limit insulin's action. In the absence of these inappropriate FFAs, the correct way to reduce the CoQ couple is using mtG3Pdh which shuts down insulin's action at the cost of generating heat because it uses NADH, stepped down to FADH2, as a direct input at the CoQ level. We want a reduced the CoQ couple when there is metabolic oversupply as a reduced CoQ couple allows reverse electron flow through complex I and insulin resistance.

Insulin resistance, via reverse electron flow through complex I, is what is wanted, heat is a by-product.

Insulin, which activates a long chain fatty acid ligase to generate acyl-CoAs for anabolism/triglyceride formation, might well be expected to simultaneously generate the glycerol 3 phosphate needed for the triglyceride backbone. The diversion of FFAs to intracellular triglycerides can be viewed as protection against excess metabolic substrate supply.

It strikes me as appropriate that the same molecule might also be used to generate the insulin resistance which limits substrate oversupply supply, if there is no fat available.

I think I might leave this as a short post before we go on to the post-obese and insulin induced thermogenesis. And possibly on to mtG3Pdh knock out mice.

I went through the paper. I understood their first worked example and how it relates 'electron leakage' with ROS production & with how the electron distribution amongst various complexes affecting upstream and downstream complexes between the different isopotential redox carrier groups.

This paper seems to suggest a great method for starting to pin down and characterize substrate behavior in terms of them being more or less able to provoke ROS production (even at "identical total rates of mitochondrial superoxide production")….damn!

So - without going too far out on a ledge - doesn't this lend further credibility to someone wanting to use dietary fats as the primary fuel? ::: because most of the energy extraction from downstream fat-products occurs in the mitochondria and inne-rmembrane space where less 'leakage'/uncoupling should occur? Or have I tripped over my own feet?

Yes, basal lipid oxidation appears to generate marginally less ROS than pyruvate. But we never do basal pyrivate oxidation and we certainly never, ever do solo G3P dehydrogenation. Pyruvate is likely to be running at full chat before mtG3Pdh kicks in. We need this pattern to look at the damage done by hyperglycaemia. Then we need basal pyruvate plus sat fats, monounsats and PUFA...

But Brand is walking in the correct direction...

...and of course PUFA should allow excess glycolysis, which means we need to look at carnitoyl-PUFA/pyruvate/G3P and try to relate these to the cell membrane GLUT4s and CD36 populations! Way to go yet methinks.