I hope we all remember Barnad's low fat vegan treatment for diabetes. This figure sums it up: 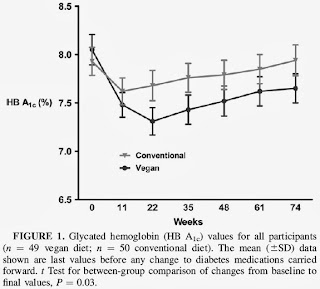 By 74 weeks folks are not looking very well controlled. Certainly not compared to sustained LCHF. Now, if we crop it nicely we get:

Which makes low fat veganism look pretty good, just so long as you limit your study to 12 weeks.

How a bout a macrobiotic diet?

Take some diabetics, measure some numbers, feed for three weeks by skilled macrobiotic cooks while teaching macrobiotic cookery, re test at twelve weeks after self preparing food at home for the last nine of those weeks.

We don't get HbA1cs in this study but we have the fasting glucose levels, the 2h post prandial levels, the lipid levels and I quite like the blood pressure levels.

Everything improved when you have a real macrobiotic cook serving you. Do it yourself and by twelve weeks things are already starting to fall to pieces: 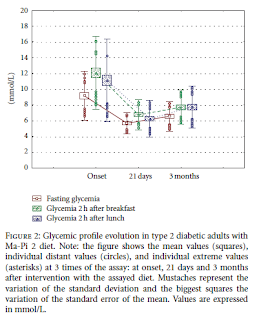 Two hour post prandial glucose levels are already rising by 3 months. Even Barnard's study preserved glycaemia for longer than this. You might expect triglycerides to be rising too. They are. If you could give a monkeys about cholesterol levels they too are deteriorating: 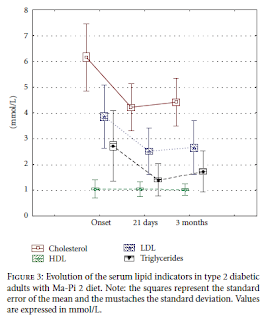 
Of course you could always claim that these folks weren't doing the macrobiotic diet correctly at home.

Me, I think they are metabolically broken and, even before they stop losing weight, they show their broken metabolism by their climbing post prandial (and fasting) glycaemia. By 74 weeks they will be worse off than Barnards failures.

There is no answer for diabetics other than LCHF.

Sometimes things come up in comments which are so good. As Johnny so kindly obliged the person who linked to the macrobiotic study in their request for comments:

"Yes I would like to comment. Please put your keyboard into a potato sack and throw it into the sewer"

BTW, if anyone can reconcile Fig 1 and the red line in Fig 2, congratulations!
Posted by Peter at Thursday, January 23, 2014

I agree that Johnny deserves a high five. Very RowanAtkinsonesque.

You should take a look at what's going on over at Free The Animal, Richard Nikoley's site, with resistant starch and glucose control/processing and insulin processing. It's a whole new world for diabetics.

A raw food vegan diet might work better, because then you'd be starving, and starvation probably does cure diabetes, if you didn't die or lose your mind first.

HbA1c is a red herring, because you need hemoglobin and reasonably long-lived red blood cells to have elevated HbA1c, so veganism will lower it even if glycation is increased.
See the discussion here: imagine what happens to HbA1c in vegan anaemic states
http://circoutcomes.ahajournals.org/content/3/6/661.long

This is muy fascinating: individuals with a mutation that makes higher HbA1c not a problem.

Despite a median duration of 48.6 years of hyperglycemia, patients with a GCK mutation had low prevalence of microvascular and macrovascular complications. These findings may provide insights into the risks associated with isolated, mild hyperglycemia.

Question: to what extent might LCHF mimic the effects of this mutation? Carnivores run naturally high blood glucose compared to herbivores but this doesn't cause any increased need for amputations.

BTW, when comparing diets for diabetes, shouldn't need for medications, amputations, dialysis and so on be the measurements used, not serum markers?

The hyperglycaemia link came from Richard Lehman's very excellent blog reviewing the medical journals. Anyone interested in the medical aspects, the clinical significance of new research, might find Richard Lehman's weekly writing an enjoyable event to subscribe to.
http://blogs.bmj.com/bmj/2014/01/20/richard-lehmans-journal-review-20-january-2014/?utm_source=feedburner&utm_medium=feed&utm_campaign=Feed%3A+bmj%2Fblogs+%28Latest+BMJ+blogs%29&g=widget_default

I’ve been thinking a great deal about what an HbA1c really means. My own view about glucose is that resisting insulin is where maximum health comes from. The level of glucose in the blood stream is probably then actually irrelevant, if you are keeping that glucose out of cells. Neither glucose nor fructose is particularly reactive with biological tissues unless they are phosphorlylated. There is a condition where people have an inherited inability to uptake fructose in to their cells. The fructose, considered to be the devil incarnate of glycoxidation, doesn’t glycoxidise anything, despite permanent elevated plasma levels with fructosuria. But the activated phosphate is another matter. The papers are on my old hard drive, really must shift them over.

Of course the GK mutation points to insulin as the problem for vascular damage, rather than glucose. Stan and I have batted this around a little. Mostly the problems are inseparable but here insulin is looking unfriendly cf glucose.

Re raw food vegans, the loss of mind is intrinsic in the mental state of veganism. Re fatality, perhaps the sooner the better would be a kindness.

"Re fatality, perhaps the sooner the better would be a kindness."

You've got an evil streak!

"Re raw food vegans, the loss of mind is intrinsic in the mental state of veganism. Re fatality, perhaps the sooner the better would be a kindness."

You are a very bitter man.

You've also said the MA-PI diet works but it takes a lot of preparation to do it correctly at home.

How do you explain that ALL of the 16 subjects came OFF insulin after being on insulin for 9-31 years if the protocol DOESN'T WORK??

That's kind of interesting. I am apparently heterozygous for both hereditary fructose intolerance and haemochromatosis. Fructose seems to cause breakouts for me, even in "Kitavan amounts."

For multiple years I've avoided iron where possible in addition to using absorption inhibitors and donating blood every 8 weeks. My intake is probably somewhat high though due to high calorie intake and food choices.

Hi John
Wow. That is interesting. I wonder whether you have excess free iron. I read a paper recently showing that obese people have excess free iron in their urine. They're often anemic and think they need more iron, not less.
'Urinary catalytic iron in obesity' http://www.ncbi.nlm.nih.gov/pubmed/21189275

It is true that in this study, the macrobiotic diet was not exactly followed. The health and intentions of the macrobiotic chef is of utmost importance. People using macrobiotics to improve their health should have their food prepared by a healthy, trained chef.