Protons (39) mtG3Pdh and lactate vs pyruvate

Here is a schematic illustration of the generation of lactate from glucose as suggested by Schurr, ready for doodling on: 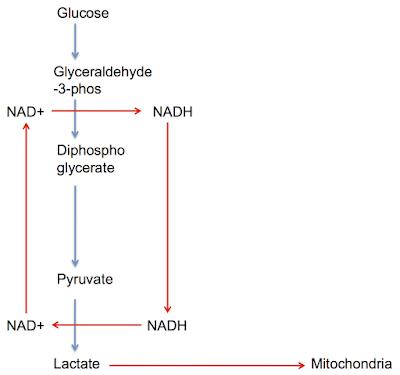 In more artistic style, from Figure 1 in Schurr's paper, it looks like this: 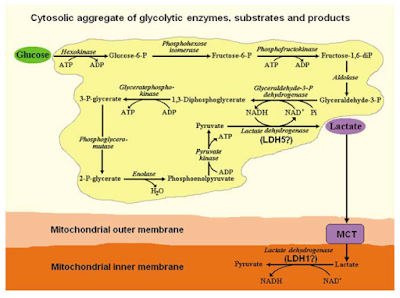 If we look at the more traditional view of glycolysis to pyruvate with a deficit of NAD+ which must be made up by the mtG3Pdh enzyme we have something which looks quite like this: 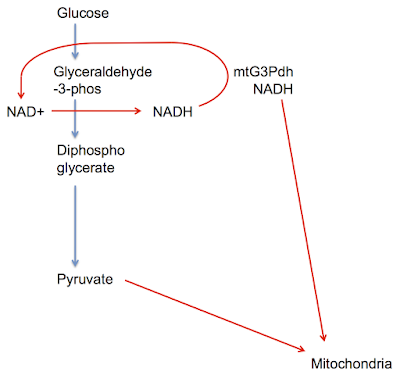 The concept here is that mtG3Pdh is being used to regenerate the NAD+ which is essential for glycolysis to proceed to pyruvate. Of course, this concept becomes obsolete as soon as we adopt the lactate hypothesis. I tend to view reality as a combination of two pathways like this: 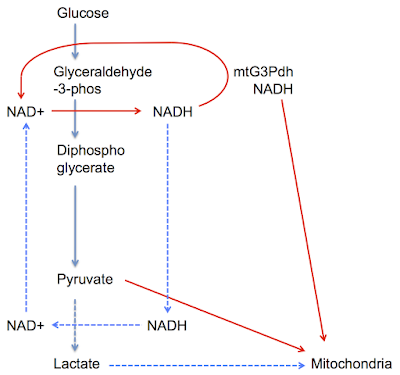 Normal function is via lactate with NAD+ and NADH in perfect balance. The generation of NAD+ from NADH by mtG3Pdh reduces the redox potential of the cytoplasm so the drive to generate lactate, while NADH is in short supply, becomes unhelpful or frankly impossible. For each NADH utilised by mtG3Pdh it is necessary to abort glycolysis at pyruvate, saving the one equivalent NADH by terminating it here rather than at lactate.

It's not that mtG3Pdh replenishes essential NAD+, it's that its consumption of NADH obliges termination of glycolysis at pyruvate. So is mtG3Pdh doing, if the traditional view is a load of bollocks? 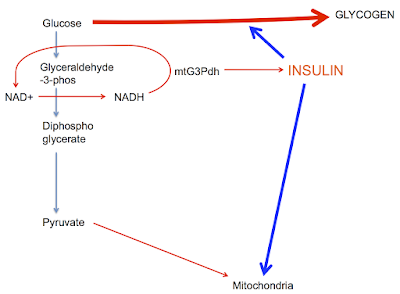 Under conditions of high glucose throughput, with insulin signalling, glycolysis will terminate at pyruvate in proportion to the activation of the glycerophosphate shuttle. Notice the two blue arrows signifying two actions of insulin. If we go back to Veech once more, with his isolated heart preparations, we have these two very specific actions of insulin:

One is an increase in glycogen synthesis. Flooding cardiac myocytes with insulin puts every GLUT4 possible on to the cell surface and intracellular glucose approaches that of the perfusing buffer, in this case 10mmol/l. The cells have absolutely no use for this much suddenly available glucose and the simple solution is to divert it to glycogen. The use of intensive insulin therapy in humans with T2D always improves non-oxidative glucose disposal. It goes to glycogen. They get fat too of course. I guess we could quote Veech's abstract:

The second arrow points to the mitochondria. Insulin acts to produce a covalent change in the ETC proteins which improves ATP generation per unit oxygen consumed.

In Veech's isolated rat heart preparation insulin REDUCES glycolysis, increases glycogen synthesis and increases mitochondrial ETC efficiency. It's all in the paper on the link above and in assorted related papers, many of which are free full texts and cover the basics. And not so basics.

Veech was looking at combinations of glucose, insulin and ketone bodies. Unlike myself, he is no lover of fatty acids. Ah well. So the buffer used had no fatty acids at all. Now, what do we think insulin will do to fatty acids? It has already maximised the efficiency of the ETC and shunted excess glucose to (harmless) glycogen.

Does insulin facilitate or inhibit the oxidation of fatty acids? The process is just like the diversion of glucose to glycogen: 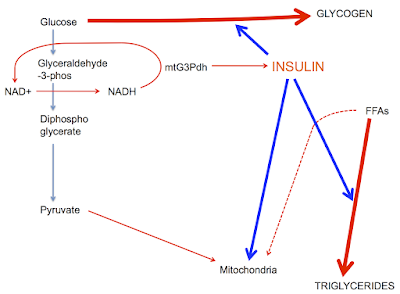 Once upon a time, before insulin kicked in, CPT1 was used to supply fatty acids to the mitochondria for beta oxidation. Given the increased efficiency of ox phos under insulin, the fate of a significant proportion of fatty acids presenting for beta oxidation is to meet a blockade at CPT1 and to be diverted towards re esterification to triglycerides in the cytoplasm.

This all well and good. Things become more interesting when we take a mtG3Pdh knockout mouse, which cannot signal through mtG3Pdh, and make it run. And run. And run. Until exhaustion, whenever that might be. Of course we also have a rather popular drug to inhibit mtG3Pdh which might mimic the knockout situation. Perhaps for the next post.

Peter I am sure most who follow you are full fledged geeks. I am not but I am still interested in your Blog posts. Could you do a dummy conclusion or take away at the end of your posts for the non geeks who are just trying to learn? Thanks in advance

I think you're brilliant. You're blog is fascinating. Would you be able to give me some books that I could use to learn more about physiology and metabolism?

That would be awesome.

Respectfully, I'm with Holly and Ren.
Don't dumb down a whole post for us, just
give a short sentence or two for those not
schooled in the subject matter. Like a
step ladder to help us get closer to the
goodies in the cabinet.

Love your blog and I'm reading it from
2006 onward. Very impressed with the
fact that you were, that far back, posting ideas that
are just now being presented on other
blogs as if they were just now thought of.
Keep up the great work.

Chris, you could try the series of lectures of which this is only one example:
https://www.youtube.com/watch?v=6wj6HbNM35o
including some soulful, heartfelt but mildly tuneless ditties.

K. Ahrens also has a free textbook and more course material at
http://biochem.science.oregonstate.edu/content/biochemistry-free-and-easy

My forays into the world of health and dieting and all that are mainly for anti-anxiety purposes, mainly panic disorder type stuff. The thing is, a lot of studies use injections of sodium LACTATE to produce panic symptoms, what's going on here??

Is the drug statins? This would of course just be a side effect.

"Of course we also have a rather popular drug to inhibit mtG3Pdh which might mimic the knockout situation. "

You spoke a little about mouse milk being mostly palmitic acid, leading to a high fat rat diet. Do you think the composition of the milk early in the animals life is reflective of optimal nutrition later in life? Being a vet, what you think the optimal diet is for dogs? High in fat? High in protein, moderate fat? Low in carbs?

For anyone who wants a good laugh: http://www.bbc.com/news/blogs-news-from-elsewhere-34858555

Hi Chris I started with Moseby’s Crash Course in Metabolism. But I had used Lehninger for my undergrad biochemistry course back in the 70s. Moseby is more accessible!

Holly, Bill et al, there is a one liner on the next post.

Blinkyrocket, I’ve not looked at this. Lactate has many functions and is probable;y a signalling molecule too. I can see why it might increase sympathetic drive. It is also a major product when you over ride the regulation of glycolysis as with hypoinsulinaemic hyperglycaemia or simple fructose over load. And exercise to lactate might signal a need for sympathodrenal activation. Lots of possibilities.

Matt, well who is to say…. The RMB advocates are pretty spot on. A little too high in protein perhaps and the PUFA tend to be a little omega 6-ish but otherwise OK. To paraphrase Tom Lonsdale in a latter to the Record decades ago “Commercial dog food is perfectly acceptable when the alternative is a slow death by starvation”. At the time I thought he was a idiot. Nowadays I vote for him as president of the RCVS every year. He always stands and always gets about 10% of the vote.

William, groan. Who will compensate the hotel owner for loss of business (admittedly compounded by ignorance and stupidity) when the WHO organisation climbs down in 30 years time???? Makes me think of all those people in the USA chowing down egg white omelettes as part of a HeartHealthyDiet. When are they going to sue?

I mean the fats for RMBs tend to be omega 6-ish, especially if chicken based as our cats are...