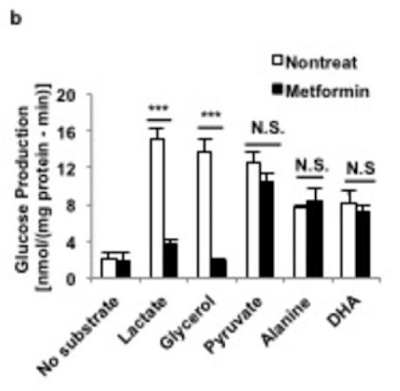 So, to stretch the idea a bit & have a feel for how powerful its mtG3Pdh inhibition is...would you contraindicate its use whilst fasting? Or could it actually have an additive positive benefit (reducing the glucose-to-ketone index further? increasing FFA use further?).

Hmm, what would be the net effect in prolonged fasting? Where does the lactate/glycerol go if GNG is slammed?

Does this affect glucagon in any way? If it's still effective at releasing glycogen then I doubt the limit of GNG would have any major bearing on basal blood glucose. Dunno.

Your post set off a series of questions in my head. I started thinking about the difference between a fat cell compared to a muscle cell or some organ cell. What does metformin do to an adipocyte? Which led to a bunch of questions.

Apparently, based on this - metformin fails to do much to a adipocyte:
http://www.ncbi.nlm.nih.gov/pubmed/2523787

Then it occurred to me that a fat cells are more likely to burn fat than other cells and thus have a bigger problem in adipocytes when the FADH2:NADH ratios are altered by overconsumption of PUFAs. Are PUFAs entering adipocytes a bit like 'hotel California' - if the cell burns them - develops inappropriate insulin sensitivity - then fat can't leave?

I just looked up the side effects for metformin, there's a pretty long list. Why does it have so many negative side effects?

Most side effects are rare - but they are messing with a bit of our biology that is under evolutionary pressure and is changing as we adopt to farming(higher carb diets). We have a bit of varity in these genes.

The other bit is drugs target a particular something - but sometimes they also fit in other locks and do things we don't want.

(There is an interesting bit of research that is looking for new drugs using deep convolutional neural networks (ANNs) based on GPUs - 3D pattern matching - similar to this:
https://www.youtube.com/watch?v=DkFmHni1Grg (warning - you might get nightmares)

Ahh - but metformin CAN lower insulin which does control fat cells - if you are eating low-carb it might just make a big difference.