Anyone who has read through the Life series will know that I have a great deal of time for reduced FeS moieties as the core energy source used during the transition between pre-biotic chemistry and something resembling life.

Bottom line: An electron from a reduced FeS moiety is able to reduce dissolved CO2 to a Ni bound CO- group using molecular hydrogen. If you supply a couple of geochemical CH3-SH molecules you can then generate acetyl-SH, precursor to acetyl-CoA, from this Ni-CO. After that it's down hill all the way to metabolism. This is where the watchmaker comes from who is going to make the watch which you might find in the jungle.

One of the earliest biological problems was to detach this reduced FeS from the inorganic cell wall and make it mobile. The solution is ferredoxin.

People have looked at the ferredoxin used by those bacteria which have done well for several billion years by developing the form of metabolism most closely allied to this very basic pre biotic chemistry. One of these ferredoxins was sequenced very early in the 1960's, while I was just a kid playing in the streets of Nottingham and Mike Russell (thanks Jack) had just gained his geology BSc from  London University.

Working with the ferredoxin sequence from Clostridium pasteurianum Eck and Dayhoff noticed some interesting things. There looks to have been a very early gene duplication, this allows the two sections of the protein to be compared to each other and this facilitated all sorts of speculation about its possible origin. A sort of molecular Rosetta Stone. Here is the sequence they started from in the nicely descriptive three letter code (it becomes more legible if you click on it):

To make comparisons easier to fit on a given line they then changed the three letter notation to the less descriptive single letter notation for amino acids during the rest of the discussion, which goes like this: 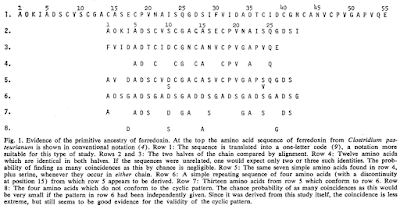 The legend to Fig 1 is quite self explanatory but, if anyone wants the full text to work though it line by line in more detail, I have the pdf. The end conclusion is that primordial ferredoxin could be derived from a simple repeating pattern of just 4 amino acids. These four: 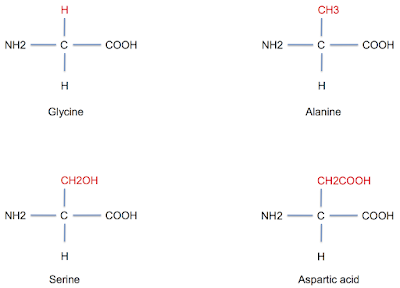 From these four amino acids they suggest you can reverse engineer the process giving this as the process of generating ferredoxin:

Apart from a nice discussion about why a very early protein, given billions of years to evolve, remains so remarkably similar to its primordial sequence, they also have a think about what the ADSG polymer might have been doing before it was co-opted to pick up an FeS cluster. Possibly some sort of simple structural polymer. They also throw in the concept that the FeS might initially have been only chelated to cysteine, I would suggest as a solubilising agent. Again, cysteine is one of the most primordial of amino acids: 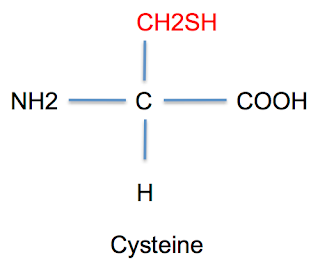 I found the paper and its proposals fascinating. They are talking about concepts which fit extremely well in to Mike Russell's ideas about hydrothermal vents at a time before there was any evidence that the vents existed. As far as I can tell it has no bearing on anything we might do today but I still like it. It says a great deal about where we might have come from.

"As far as I can tell it has no bearing on anything we might do today but I still like it."

It is one bit, of one of the threads, of the "what bit gets broken(tm)" enigma that I keep obsessing about.

There is this nice diagram on wikipedia.

There is a correlation with hyperhomocysteinemia with T2D and PN (as well as CAD). There is some evidence (not good enough) that bringing down homocysteine with B12, betaine(TMG)etc might slow/stop the progression (not reverse) of PN.

Yet the question remains is it the smoke or the fire. Reducing homocysteine has not turned out to look effective in treating CAD - yet that does not rule out causation.

Understanding this twisted web of control loops is VERY HARD - and adding a bit of evolutionary history might help free up some clues - clues we really need.

I keep thinking of the sulfur in some vents - sulfur holding metal co-factors in enzymes - removal of heavy-metals ?

,.,.
Control loops - it occurred to me that something that holds our weight-set-point is likely to be something that integrates -- (see PID loops ). The leptin feedback seems a bit like that. I wonder what a shortage of leptin feels like compared to a carb crash? I don't think appetite is a single subjective sensation.

Peter have you tried playing around with the Ferredoxin sequence in Dotlet? http://myhits.isb-sib.ch/cgi-bin/dotlet
Who knows, an interesting comparisons could pop up.

I'm repeating myself, but, I love the Life Series!

[Shameless plug have nothing to do with the origin of life: new post up on cancer ==> exploring the link between metabolism & genetics https://raphaels7.wordpress.com/2016/02/10/cancer-linking-metabolism-to-genetics/]