Well, I got a full text copy (thanks again to Mike Eades) of the acipimox in mice under intermittent hypoxia study. It's a very strange paper. But it has some aspects which I find interesting. 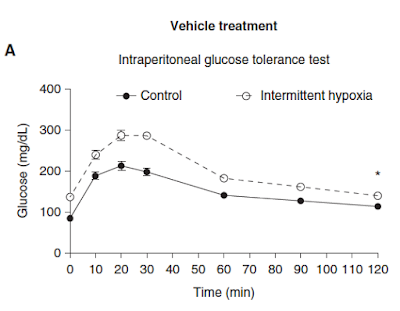 If you do exactly the same thing but add acipimox to the drinking water you get this: 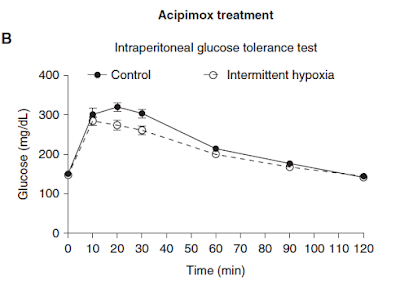 I have no idea what happened to their weight because the paper doesn't say.

There is a suggestion, from the discussion, that they gained weight, possibly a lot of weight:

But you're not getting the weights. I am suspicious that the weight gains were such that stating them would have demanded a discussion of exactly why they occurred.

So a combination of being in the apparatus and drinking acipimox made the mice fat enough to mangle their glucose tolerance.

The group also treated a set of mice with acipimox without putting them in the apparatus. Just left them in routine cages with or without acipimox. No problems with weight gain or glucose tolerance.

BTW Just for fun here is the effect of injecting exogenous insulin in to those fat mice after two weeks on acipimox under control chamber conditions. Insulin does nothing. I think very insulin resistant is a reasonable description. It's the black circles you need to look at: 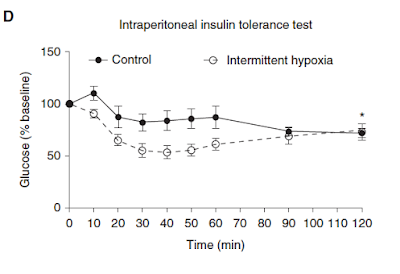 So what can you take away from the paper? They have a quirky finding. A "That's odd" moment. A bit like Sauer finding that putting a rat in to starvation allows its xenografted cancer to grow like wildfire. But, unlike Sauer, they've just stepped round it and pretended it was unimportant.

Their core finding, that inappropriately elevated free fatty acids (especially after acipimox) trigger glucose intolerance and insulin resistance, strikes me as very important. Lowering FFA with acipimox acutely (1-2 days) goes a long way to ameliorating metabolic syndrome (acutely), lots of studies on this. There is a significant role for FFAs in metabolic syndrome, largely related to adipocyte distention/dysfunction. It's not all of metabolic syndrome, but a big chunk.

So from here I wandered around other triggers for elevated FFAs.

Late additional thought: IH mice are thin and have elevated FFAs due to sympathetic nervous system activation. Their adipocytes are half empty, like a human on amphetamines or crystal meth. Given enough insulin there is room in the adipocytes to cram some more fat in, where it will stay until the next meth hit. So they can respond to a GTT. Acipimox treated mice have overstuffed adipocytes, that's why FFAs are elevated rather than due to stimulated lipolysis. Trying to cram more fat (with glucose for the glycerol) in to these adipocytes is almost impossible, a situation worse than that with those half empty adipocytes after IH or crystal meth exposure.
Posted by Peter at Wednesday, February 08, 2017