Well, this post is about rho zero (ρ°) cells. TLDR: It's even more obscure than usual.

This is the basic ETC plus the ATP:ADP antiporter (ANT) and the Pi:H+ symporter (Slc25a3) added:

Most of this is very obvious but it's worth pointing out that ANT exchanges one ATP outwards with 4 negative charges for an ADP inwards which has 3 negative charges. The ADP needs an inorganic phosphate to reform ATP and this Pi carries one negative charge and enters the mitochondria via Slc25a3, facilitated by consuming one proton of the proton gradient. All is hunky dory with electrical balance, accepting some delta psi consumption.

ρ° cells are man made constructs which have no mitochondrial DNA, usually deleted by exposure to ethidium bromide. They live by glycolysis and need supplementary pyruvate and uridine to survive. They have no electron transport chain proteins because they lack core components needed to form complexes I, III, IV and the F0 (membrane) component of their F0F1 ATP synthase.

They do still form "petit" mitochondria. The F1 component of ATP synthase is present and it works. ANT and Slc25a3 are present and functional. There is CoQ, which is permanently reduced because there is nowhere for it to hand its electrons on to... A number of other cellular processes are also blocked, those which need to reduce CoQ to CoQH2 to occur. From

Restoration of electron transport without proton pumping in mammalian mitochondria 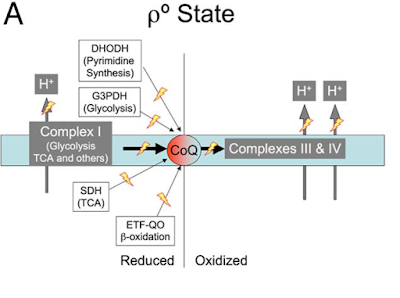 The really strange thing is that ρ° cells have a mitochondrial membrane potential and a proton gradient. This is what happens:

ATP which has been made in the cytoplasm enters the mitochondria via ANT running in reverse. The F1 component of the ATP synthase breaks down the ATP to ADP and Pi. ADP is exchanged outwards via the ANT antiporter and Pi is carried outwards in combination with a proton via the Slc25a3 symporter. This proton flux maintains the proton gradient across the inner mitochondria membrane, all of this process is being powered by glycolytic ATP synthesis.

I became interested in ρ° cells because the are so strange. But there are some practical things they tell us too. There's a venerable mini review here:

They cannot perform reverse electron transport through complex I, because there is no complex I. So no superoxide. Equally, there is none from complex III either. Clearly this has implications for what type of apoptosis they can perform and how they sense oxygen tension but more interestingly you can make ρ° versions of pancreatic beta cells.

Back in the 1990s no one was thinking about RET as being essential to insulin secretion but they were pretty sure the process was based around mitochondria as well as needing glycolysis. In pancreatic beta cells glycolysis specifically inputs to the ETC at mtG3Pdh in large amounts, which will generate RET and the superoxide needed for insulin secretion. This occurs in other cells as part of insulin responsiveness, but not to the same degree as in the beta cells.

The review suggests mtG3Pdh in beta cells acts as a sensor for cytoplasmic NADH levels. That's a nice idea. Just struck me as interesting.

The EE in me keeps looking at the membrane potential and wondering if it could be tapped to power some electronics.

I wonder if sometime in the future they will use these things as building blocks - Bio-batteries. When your cell phone dies you pour in a bit of lard...

I think someone put up a post on Facebook saying you can do this with plants but I never went looking to see what level of creditability it had!

Hi Peter, Have you heard about the Insulin Index ? Work being done by Marty Kendell? What are your thoughts on its impact on LCHF diet?

"I wonder if sometime in the future they will use these things as building blocks - Bio-batteries. When your cell phone dies you pour in a bit of lard..."

I suppose low-carbers would be averse to simply plugging in a new potato.

There are quite a few people working on bacterial batteries. Bugs are used to enrich ores also and I think coal eating bacteria produce most of the methane that comes out of coal deposits. So, quite a lot of energy coming our way when you add in the bacterial contribution to herbivore digestion.

Lovely couple of essays Peter, reading these I get the same feeling as when I listen to a Chopin scherzo or such-like. Virtuoso performance.

Hmmm, did life in earth start in a discarded alien battery?

Hi Stray, not really fussed with the insulin index, if you are eating high fat, moderate protein and LC the amount of tinkering available is a bit limited. Might matter more if you need more carbs for whatever reason......

I finally got round to reading this post of yours - glad I did!

They seem to produce ATP only by SLP in the cytoplasm. They have no ability to turn the TCA at all, SDH needs CoQ to accept its electrons and all of the CoQ is fully reduced... Adding an alternative oxidase allows the TCA to turn and gets you out of the need for uridine supplementation and also seems to get you out of the need for pyruvate supplementation. Adding an NADH oxidase normalises the redox state of the cell and they then perform pretty well, like a-mitochondrial yeasts running fully on SLP from glycolysis, in this case to lactate which they excrete....

Ok thanks for correcting the wrong idea I had about p0 requiring TCA activity to fuel SLP.

Like you say, this is super interesting but obscure. i have to think about it some more in order to fully wrap my head around the modus operandi of p0