Naked Mole Rats appear to use fructose as their preferred metabolic substrate when exposed to both physiological hypoxia (which is common in their lifestyle) or complete anoxia under experimental conditions. It's irresistible to go and find out a little about why they might do this.

I suppose the first thing to say is that the fact that fructose is protective against hypoxic cellular injury has been known for a long time, this paper coms from 1992:

There was a lot of work done in the 1980s and 90s looking at ways of preserving liver cells under anoxia. I'd guess this was looking to improve the survival of harvested livers within the transplant program.

If we look at ATP levels compared to an externally supplied control (MDPA) we have this graph, with hypoxia imposed at one hour and relieved at three hours: 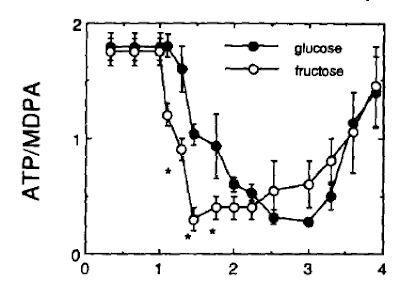 ATP falls faster within the first 30 minutes of anoxia with fructose. Although the trends are interesting, all else is ns after 45 minutes. So fructose causes a more severe ATP depletion than glucose. However a better marker is the ratio of ATP to Pi (phosphorylation potential), here plotted as the inverse for some reason, ie the lower the better in the graph: 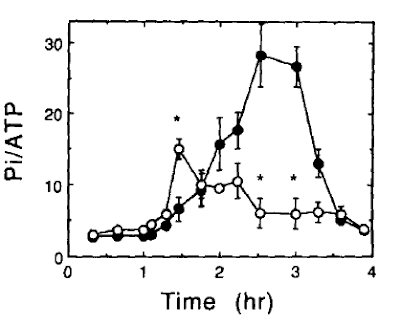 So under fructose there is less ATP in the cytoplasm than under glucose but the phosphate level is even lower, giving a similar or more favourable ratio of ATP to Pi except at the 30 minute mark. So the next question is: Where has the phosphate gone?

This might be related to the protective effect of cytoplasmic acidosis. It doesn't seem to matter how you acidify the cytoplasm (fructose is as good a way as any), it's the acidosis which appears to protect against mitochondrial failure. There's a nice paper here

Protection by acidotic pH and fructose against lethal injury to rat hepatocytes from mitochondrial inhibitors, ionophores and oxidant chemicals

So if we go back to Gasbarrini's paper we can look at a surrogate for intracellular pH and how it differs between fructose and glucose: 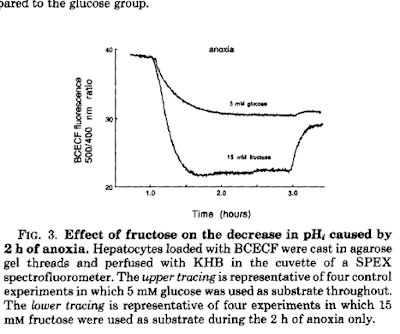 Fructose produces a much more profound acidosis. If we look at that basic ETC doodle I used in the rho zero cell post, but eliminate complexes I, II, III and IV we have this:

Later changes which confirm the commitment to cell death are an influx of extracellular calcium in to the cytoiplasm. This is marked under glucose and stays within tolerable limits with fructose. I strongly suspect the metabolic decision making is being controlled by the pH drop and the Ca2+ influx is consequent to a mitochondrial decision as to how badly damaged the cell might be. But it's hard to be sure with the data we have in these rather elderly papers.

Here are the reactions relevant to the pH change in lactic acidosis, all taken from the wiki entry on lactic acid. They are interesting. This is the situation down to pyruvate:

There are two protons generated to acidify the cytoplasm. Now look at this step where pyruvate is converted to lactate. The molecules in the red oval are needed to form the lactate.

So where did the two acidifying protons go to? They are consumed in converting pyruvate to lactate. Does lactic acid generation actually acidify the cytoplasm? It appears not to do so here but it must do because the overall reaction is:

So where are these two protons? They are in the two ATP molecules:

The conversion of ATP to ADP releases them. So lactate causes acidosis only when the ATP generated during glycolysis/fructolysis is consumed... Obviously ATP depletion is common in anaerobic exercise or hypoxia/anoxia. Hence lactic acidosis shows under these two conditions.

The Naked Mole Rat paper is very descriptive, with lots of experimental results but is light on insight as to hows and whys. I think the above scenario might well have explanatory power and might have been extended from the liver to the rest of the body in NMRs.

"It doesn't seem to matter how you acidify the cytoplasm (fructose is as good a way as any), it's the acidosis which appears to protect against mitochondrial failure" ==> fits pretty well with what I know about cancer cells. The bastards are masters at effluxing protons to maintain a normal (and even slightly higher than normal) pH, and their mitochondria are ALWAYS broken & dysfunctional to some degree.

I'd love to see some cancer cell culture experiments repeated with more fructose conditions vs glucose to see how the mitochondrial response differs in a scenario where large ATP demands exist (lots o' replication!)

@raphi am I reading that correctly as "cancer cells could be using fructose to survive?"

Maybe less oxygen means less free radicals, and thus less insulin resistance, and thus fructose is protective in hypoxia because it enters the cell easier than glucose, due to it having a lower F:N ratio than glucose,? I don't think that's correct but maybe.

Also, I don't really understand fructose metabolism fully, but perhaps it simply creates more oxygen as a by-product of it's metabolism than glucose?

In addition to what you already mentioned.

yes, they can shunt fructose down the PPP to increase biosynthetic intermediates that the cancer will require to sustain high rates of proliferation

Fructose "can't" create more oxygen, but do you mean that to create 1 unit of ATP it uses more oxygen? (compared to glucose, say)