This came to me via George in the comments to an earlier post:

Again, it is a pro-saturated fat paper, always nice to read. They did some odd things such as using fully hydrogenated soya oil, mostly stearic and palmitic acids, versus corn oil and their feeding protocol used controlled intragastric feeding, with or without ethanol. Obviously there is no fructose in any of the feeds.

But they generated some lovely micrographs. These next ones are Oil Red O stained. There is essentially no lipid accumulation in either of the control groups: 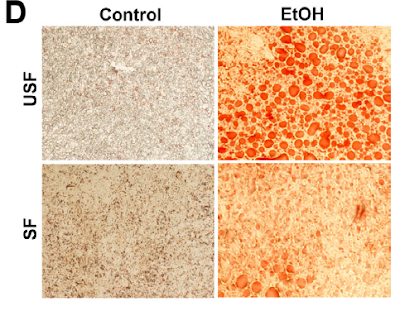 And here it is in numerical form: 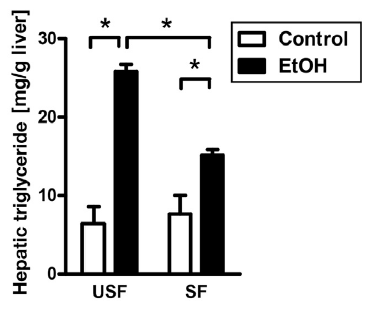 USF diet supplies 35% of calories from corn oil (which is roughly 60% linoleic acid, ie 20% of total calories as PUFA) and there is no lipid accumulation at all without ethanol. PUFA alone to not appear to cause fatty liver. Adding ethanol produces spectacular steatosis (top right).

The SF diet also included 5% of calories as corn oil which, combined with ethanol, does produce some steatosis (bottom right).

The other images of great interest are the 4-hydroxynonenal stains looking at lipid peroxidation, obviously derived from linoleic acid. These use an immunohistochemical stain and so this will be come up as brown, that's what we're looking at on the top right image. Obviously 4-hydroxynonenal is a marker of the process leading to cirrhosis and eventually to hepatocellular carcinoma. Another gift from your cardiologist: 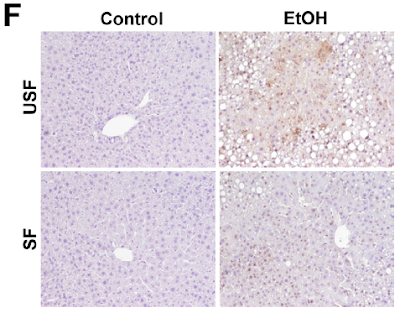 If you'd like it in more numerical form they measured TBARS too: 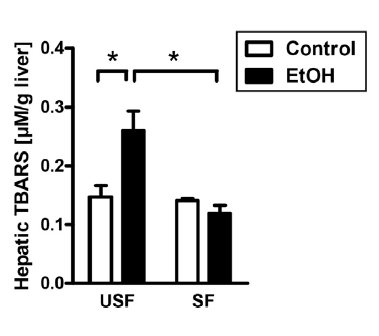 My feeling is that fructose is going to behave in exactly the same way as alcohol, through a very similar process. If that is correct then saturated fat will protect your liver from peroxidation. I'd not suggest that fructose won't cause problems, it might even generate steatosis and hepatic insulin resistance, just conversion of that steatosis to NASH seems very unlikely without the PUFA.

For some reason I had to think of foie gras. They force feed the ducks with a gruel of 95% corn (maize) and 5% lard.

Wouldn't it be more efficient to use e.g. apple juice? Maybe it'll change the flavor, too, so that could become a new hype :)

Calvados, definitely! I can just envision the marketing campeign. This is better than beer raised cows!

I could go with calvados too....

They add 5% corn oil to the SFA in these experiments so that the results aren't confounded by EFA deficiency (exacerbated by alcohol stripping LA from membranes due to 10x upregulation of the MEOS which is, in evolutionary terms, actually a PUFA metabolising pathway that's been repurposed to allow survival after high alcohol exposure).

But what if they replaced that corn oil EFA with phospholipids, which supply EFAs more efficiently but aren't hepatotoxic in the presence of alcohol? That's what Sam French suggested in 1995 - avoid all oils and high PUFA foods when on a binge, but eat more fish, nuts and seeds when in recovery to replenish the EFAs safely.

So using fructose rich stuff to stuff geese is not that far-fetched.