Insulin makes you hungry (2) even in the presence of hyperglycaemia

TLDR: The function of insulin is the inhibition of lipolysis. Really.

This is the paper cited by Woo:

Effect of Insulin and Glucose on Feeding Behaviour

The research group used real live humans. They looked several protocols but the ones we are interested in are those where they clamped insulin between 100 and 150microU/ml (high but plausible for post prandial on something like the SAD) and clamped glucose at either 150mg/dl (highish normal) or 300mg/dl (frank hyperglycaemia). They also had a control group (saline infusion) and an eu-insulinaemic with mild hypoglycaemia (50mg/dl) group. This is what the insulin/glucose values looked like, excluding the controls: 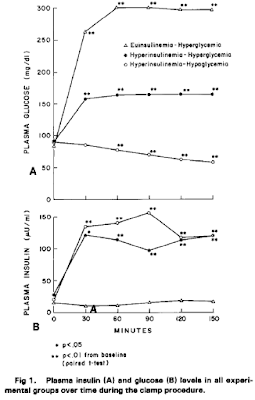 They asked the folks how hungry they were and got this sort of result:

I think the asterisks give the correct impression. However just for fun, at the end of the clamps, the subjects were allowed to suck a liquid meal via a straw through a barrier (so they couldn't see how much they were drinking). They ate/drank as much as they wished to. This is what happened:

The hypoglycaemic group was excluded from the eating trial because they had had all sorts of things done to get stable hypoglycaemia with eu-insulinaemia which involved somatostatin/replacement insulin and so precluded feeding in the immediate post-clamp period. We just have to accept the subjective appetite ratings for this group.

You would have thought that it would have been settled, back in 1985, that insulin in humans is an appetite stimulant. And that mild hypoglycaemia of 50mg/dl is not, provided there is no hyperinsulinaemia.

Of course this is a simplistic interpretation and quite possibly incorrect. Let's have a look at it from a more metabolic perspective.

What does insulin do?

The function of insulin is the inhibition of lipolysis.

So if we look at this current paper in the light of the 2011 paper we can make a more insightful interpretation of what is happening.

The people under hyperinsulinaemic clamps are not eating, because that is the study protocol. They are being infused with insulin at a time when they have no access either to any food or to their adipocyte lipid stores (and their hepatic glucose output will be near zero under the insulin clamp). Even the people under an hyperglycaemic hyperinsulinaemic clamp, who received around 700kcal of glucose over 150 minutes, are losing much of this glucose in to glycogen stores while simultaneously being deprived of adipocyte sourced FFAs.

The hunger may well come from metabolic energy deprivation rather than the insulin itself being an "hunger signal" of any sort. Insulin is the signal to store ingested calories. If it stores calories as if you have just had a meal when you haven't just had said meal, you are going to be hungry for those lost calories!

Labels: Insulin makes you hungry (2) even in the presence of hyperglycaemia