How much linoleic acid to get fat and insulin resistant?

Tucker and Mike both gave me the heads-up on this paper recently.

It's nice and simple: feeding 22.5% of calories as linoleic acid (LA) to a mouse makes it obese and insulin resistant. Feeding 15% of calories as LA makes it identically obese but without the insulin resistance. The argument can be made, very convincingly, that LA is converts to 4-hydroxynonenyl (4-HNE) in proportion to the LA content of the diet. 4-HNE is a powerful driver of insulin resistance so the hypoglycaemic response to exogenous insulin is markedly blunted in the 22.5% LA group of mice. As in the top line here: 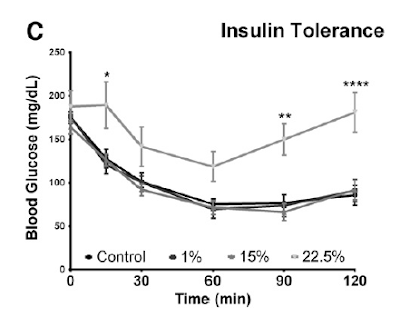 Here are the weight gains, which need a little consideration: 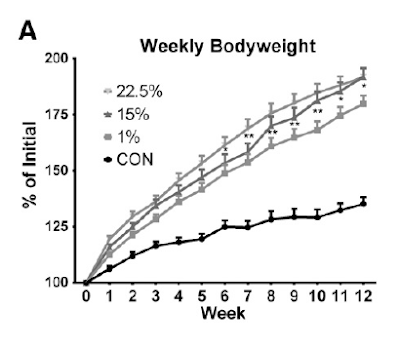 With the eye of faith you can see that the top line (22.5% LA) starts off gaining weight faster than the next line down (15% LA) but converges from around 7-8 weeks onward. My guess is that this is when insulin resistance from 4-HNE started to over-ride the insulin sensitising effect of LA which caused the weight gain in the first place.

Now the third line down is the interesting one. This diet only contained 1% linoleic acid. OK, these mice are statistically significantly slimmer than the 15% and 22.5% LA fed mice (p less than 0.05) but they are hardly exactly svelte when compared to the crapinabag (CIAB)-fed control mice (black line down at the bottom). And the CIAB food contained 4.22% of calories derived from LA.

That needs some thinking about.

It makes me ask: Why do the vast majority of high fat fed mice/rats become obese? Apart from the fact that they have been selected for this response.

There's probably another post or two needed on that one.

As an aside I would just comment that while I agree with Tucker that 4-HNE and related products of free radical modified PUFA are the best explanation for this study, my feeling is that the 15% LA group with sustained insulin sensitivity allowing sustained weight gain probably explains the situation in the current human population rather better. As sustained adipocyte distension progresses then we eventually get FFAs released in the presence of glucose and insulin, a Bad Thing. The ROS from this combination will eventually generate 4-HNE too but rather further down the obesity road compared with the 22.5% LA situation.
Posted by Peter at Monday, December 31, 2018

Labels: How much linoleic acid to get fat and insulin resistant?

Struggling to understand this . How did they manage to get a diet of only 1% LA and how much LA IN the control diet . Also what % of other fats ? For all 4

The paper is a freebie at https://www.ncbi.nlm.nih.gov/pmc/articles/PMC5235953/, the diets are in Table 1. They paid Research Diets to formulate them and checked the fatty acid composition by in-house gas chromatography/mass spectroscopy. That's very sensible. I think the diets are clean.

Any chance the control rats were simply malnourished? The HFD rats were significantly fatter, but not really meaningfully so at 0.3-0.4% body fat vs the 0.2% body fat of the controls (fig 1D). This suggests the HFD rats’ body weight difference (~180% of starting vs ~130%, fig 1A) was much more due to increases in lean mass than fat mass. The paper’s introduction notes that “high-sucrose diets” produce “a lean mouse” unless combined with a high-fat diet. And table 1 notes that the HFD rats had, per gram of protein, around 1/3 the carbohydrate and 4.5x the fat in their diet as the controls, but doesn’t specifically mention the carbohydrate composition of any of the diets. Sucrose + PUFA being the winning obesogenic combination here: https://high-fat-nutrition.blogspot.com/2016/01/on-drinking-varnish.html

They did say that the high fat diets were based around D12451, so I guess these had some sucrose included. Clearly the mice were still growing, 12 weeks old at the start of the experiment, so lean body mass undoubtedly was a lot of the weight gain. You are left with wondering whether the relative increase of fat gain to give roughly doubling of fat percentage in the mice is biologically significant. I tend to go this route…… What interests me at the moment is that all of the high fat diets were essentially indistinguishable, whatever the p value.

As an exercise, I used chronometer (used to track calories) to set up a keto diet (very low carb diet) of chicken (dark meat, with skin), bacon, avocado, and nuts, and got an omega 6 value that was 20% by calories of the about 2,100 calories per day. And I gave them a salad but used olive oil and not manufactured, high O6 salad dressings. All "healthy" fats. If you're not keto, though, it might be tougher to get that high of an O6 value, I would think (some of that fat would be replaced by carbs). So maybe your idea of 15% or so is more likely.

I also think obesity is more complex than just LA. I know Tucker has a physical issue with O6, but I got fat drinking beer, then eating pizza and ice cream. I vacillated between a super low fat diet, then getting depressed, then drinking beer, eating pizza and ice cream. I never ate fried foods, salad dressings, etc. If I ate a "snack", which was not often at all, it was very low fat such as pretzels. Nothing fried. Thus, while I think O6/PUFAs explain a lot, they do not explain all obesity.

The other aspect is that I don't think insulin controls energy flux under ketosis conditions. The data suggest that it might be fatty acid carnitines binding close to the external docking site of complex III for CoQ and/or fatty acyl Co-A binding close to the matrix binding site for CoQ which regulate electron flux down the ETC. Insulin is basal and insulin signalling should be basal so control of electron flux down the ETC should be based around fatty acid metabolism +/- ketones... Getting hard data is difficult, I've been looking at it for months if not years.

Obviously inhibiting the transfer of electrons from CoQ to complex III will markedly reduce the CoQ couple and drive RET and superoxide generation as normal physiology for anyone who hasn't eaten for two days.

Just think - in 40 years perhaps this will be common knowledge of medical providers?

Well, the seed-oil folks of the big-ag-lobby are not going to like this paper. They used to be better at fixing these things.

Reminds me of the latest story - there is a young man I know of in a MD-PHD program - he turned down a research position because the data just failed to support the hypothesis - They kept telling him: "..but the grant money is there!?" So someone else got the job. The grant money controls the narrative - the science does not matter.

False and ungrounded narratives rule the business of medicine.

I like the "Death" bit in the headline - sort of hard to massage those numbers.

What advice you likely won't get for controlling GERD is to eat a low-carb diet - Some people knew this back in the '50s and '60s - but today it is presented as new:

Another superficial stab at keto. The author seems to be out to promote her new book, though:
https://www.theguardian.com/lifeandstyle/2019/jan/07/high-on-fat-low-on-evidence-the-problem-with-the-keto-diet

@Eric, as a regular Guardian reader I saw that article today. Scanned it first to see her affiliation. As soon as I saw "registered nutritionist" I knew what to expect. And unfortunately comments are closed, so I could not provide helpful feedback about statements like

"But a diet is a diet is a diet, and they all work the same way – by reducing the net amount of energy consumed. Keto diets may have a slight advantage, as the high fat intake is hypothesised to have satiating properties, helping you stay fuller for longer. But in reality, we have little evidence to show that keto is more effective in the long run than any other diet – or, indeed, that any diet succeeds in keeping off weight."

Eric and cave, yes, the failure to see what controls appetite. I believe the concept that insulin makes you hungry might be more heretical than any metabolic advantage/disadvantage under differing protocols.

Peter -
By my calculations, you do a ‘What do I eat’ post every 5 1/2 years. Seems like that time is approaching, would you be so kind as to do a quick update? That is if anything has changed since 2013... Adam

I might have a look. Not much has changed really. I've commented before that I think I might have some degree of protein creep, I've drifted back from macadamias for lunch towards 90% cocoa chocolate and I eat one "proper" meal a day. Still in low grade ketosis which becomes marked with exercise. So a little way off of Kwasniewski's concept but not too far I hope!

Regarding your diet, I think I recall you gave up the six egg yolk breakfast some time back. Am I remembering correctly?

Bob, yes, it ate a long way in to the amount of protein I prefer to eat. We still base a very high percentage of our meals around eggs and the chickens still get a lot of the whites.

I find it interesting that you still mention Kwasniewski. Unfortunately there is very little quality information coming from him directly (he's still alive but pretty old and little is known of his current health status) or the people/group around him. His writings were never strictly scientific, lots of anecdotes and bold statements (which prove mostly true if you consider the latest research) but even in Poland he is not really taken seriously even though you meet people whom Kwasniewski literally saved life.

Hi Tomasz, yes it would be interesting to know more and I know exactly what you mean by his tendency to make bold statements which research gradually comes to align with. I really enjoyed too his off the wall ideas about the role of diet in shaping temperament, individual and national, pasture diet, trough diet and etc. Some of the concepts were pretty far out!

Wait what? I was under the impression JK died from colon cancer?
Peter did you get around to doing your lab tests? Still curious about your ALT score.

altavista, I completely forgot to get my labs for liver function. I'll see if I can get them done on Thursday. I believe an OD person did die of an intestinal cancer, not JK as far as I know.

Should get the results today!